I know it's Friday.  But Thorsday escaped from me.  I decided to wash some of my sheer curtains, and 6 rooms later, it was time to cook dinner.  Ergo, no Thorsday Book Review until today (I"m laundered out for now).

My daughter in law found this book on a shelf while they were living here for a few weeks, read it and enjoyed it.  I remembered having seen the movie some years ago, and, thus had purchased it from a book sale a year or 2 back; sadly, I don't read all that I've purchased quite as quickly as I'd like.  DIL had left it on the coffee table one night, I found it and started it, and so it began.

THE SECRET LIFE OF BEES
by Sue Monk Kidd
copyright 2003 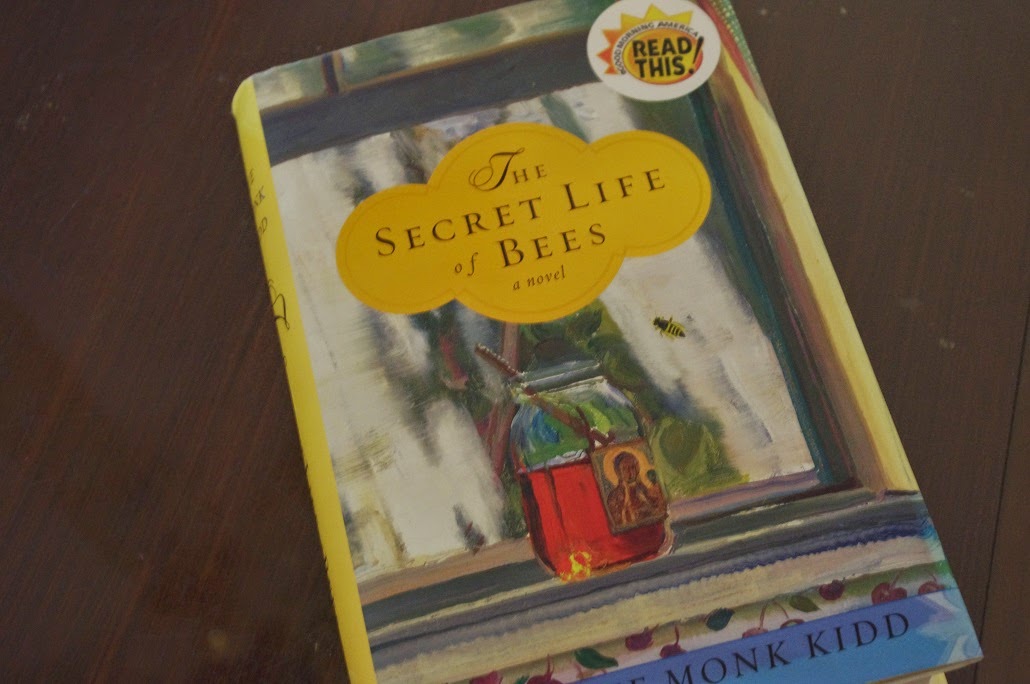 Lily is a 14 year old girl in the early 1960s.  Her mother died when she was about 6 from a gunshot, and her father is a cold, distant, sometimes mean man.  Lily had found a small metal box in the attic containing a few things of her mother's and buried it in their peach orchard, so she could dig it up and look at her mother's things when she felt especially lonely.  The only affection Lily had was that of her nanny, a black woman named Rosaleen.

One day, Rosaleen was walking downtown to register to vote, so Lily decided to walk with her.  A group of white men harangued Rosaleen, who dumped her jar of tobacco juice on their feet.  They beat her up, the sheriff was called, Rosaleen was arrested, and Lily hauled off to jail, as well, until her father came to get her.  Rosaleen was transferred to the hospital, under guard, after sustaining more "mysterious" injuries in jail, so Lily packed some things, including her mother's metal box, broke Rosaleen out of the hospital/jail, and they set off walking to Tiberion, a name she found on the back of a black Madonna picture she found amongst her mother's belongings.  The kindness of strangers helped her find a Pepto Bismol pink house where honey was made and sold with the Black Madonna label on the jars.

The book is the story of a white girl living with her black nanny and 3 kind black ladies for a summer, learning to keep bees, and learning life lessons along the way, all in search of the truth about her mother's life and death.  It's moving, thought provoking, and not sickeningly sweet.  5/5

Have a lovely weekend, everyone!
Posted by Marjie at 3:04 PM

I've heard good things about that book, though I've never read it. I'll keep my eyes open for it at sales or on Kindle.

This sounds like an interesting read. I like reading books with stories like this one. Thank you for stopping by my blog, I hope you stop in again.

I read it when it was "new." What's interesting is I didn't remember much other than that the girl and her nanny went on an adventure and life unfolded.

I loved this too!

Thanks Marjie. Sounds like a book I would love to read. I've never seen the movie. No worries, and love, Carol

I love, love, loved this book! I need to read it again.

Hi Marjie,
I too have heard good things about this book and now you have confirmed them. I'll be looking for it also. I need a good Summer read:) Thanks for sharing, Marjie...

I read it some years ago, great book!

I read it some years ago, great book!

I Loved that book!!!

A good book! I find it interesting too that your blog is 'modern day Ozzie and Harriet' which cross references with this book a little - referring to 'no Ozzie, just Harriet and her 10,000 daughters' Seconary, in the spin off series 'Ozzies girls' there is a black girl living with a white family, where as this is a white girl living with a black family. Some parallels between the book and the show (never seen either show, so I wouldn't know) or between busy bees and peoples busy lives...
I find it fascinating. I wonder if the writer thought about the show when she was writing the book?