All of my sons were home for Easter, and none of my daughters were.  One daughter is eagerly awaiting the arrival of her second child, one was working, and the third, who lives 650 miles away, couldn't take enough time off to make the trip worthwhile.  But 6 sons would seem to be enough.

I made a boneless leg of lamb for Easter.  It was beautiful, it was large, it was delicious.  Easter dinner here is always on Saturday, so everyone can enjoy Easter morning and early afternoon with the family, and then go home as their schedules dictate.  It's been a tradition since the oldest started college, and it works well for us. 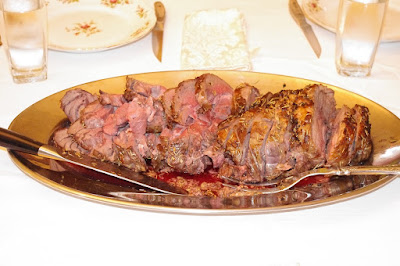 Our table looked underpopulated, but that happens hereabouts.  Still, I'll joyously take anyone who shows up.  And I might need to make a spring colored tablecloth.  The white one is a little boring. 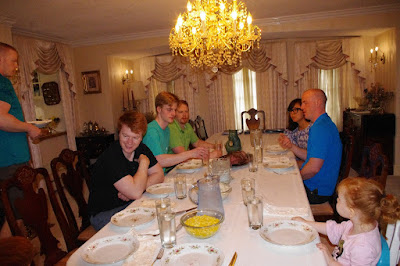 And on Sunday morning,we held an Easter egg hunt for the 2 little ones who sere here.  Uncle Jeff hopped around, somehow managing to find but never actually collect, plastic eggs, and everyone had a fun filled morning. 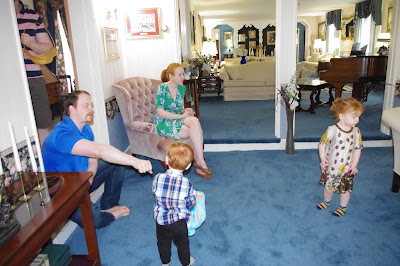 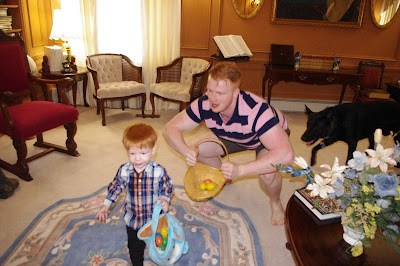 I hope your Easters were filled with relaxation and fun.  And I hope the Bunny was good to you and yours.

Happy Monday, everyone!
Posted by Marjie at 3:10 PM 2 comments:

I was fortunate enough to spend my Easter with 2 adorable little friends of the Bunny. 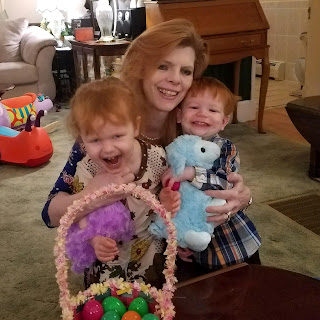 For a while Saturday, it looked like another grandchild was planning to make her way into the world, but after about 8 hours in the hospital, she decided to stay where she was.  Oh, well, I'll have to wait a while longer to meet Little Miss Somebody.

Happy Easter, everyone; I hope the Bunny was good to you!
Posted by Marjie at 6:53 PM 3 comments:

Patrick is fine.  Let me start there.  But on Friday afternoon, in rain, on the interstate, traffic snarled, and he rear ended someone, and then was sideswiped himself.

This is what's left of my 2002 Lincoln Town car.  Obviously, it's completely wiped out.  He had to crawl into the back seat to get out the back passenger side door, because the other 3 are inoperable. 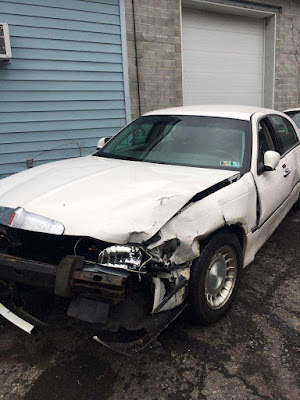 Patrick has not a scratch on him.  No aches.  No pains.  But he has vowed to be a more careful driver.

And that is why I am a firm believer in very large cars.  It is a happy weekend, the loss of a great car notwithstanding.  (Don't worry.  I have a gold twin to this one.)
Posted by Marjie at 1:12 PM 5 comments:

Have you ever heard of The Great Courses?  They sell pre-recorded college level courses about a variety of wonderful topics ranging from lifestyle to history, physics and more.  In January, I received a sale catalog from them, and jumped with both feet into buying some of their courses on DVD.  One of them was The Everyday Gourmet: Rediscovering The Lost Art of Cooking.  Eh, why not?  I could use some refreshers.  And it's not like I think I'm a great cook; I've just been able to fake it for the last 40 years or so.

And this course has been terrific.Even when it's something I think I know, I've enjoyed having it presented to me such that I'm certain I've been doing it right for all these decades.

Lesson 3 Was about essential kitchen tools from pots to shears.  And what did we cook in that lesson?  Ratatouille.  I've heard of this for years, never had it, and never thought of making it.  But somehow, after seeing this lesson, I had to make it.  My version is a little different from the classical version, in that I don't eat peppers. And this guy doesn't give actual measurements, because he doesn't know how much you want to cook, so he's my kind of cook.  Here's my version, with my usual slipshod approximate measurements.

Using a large flat bottomed pan, pour olive oil in the bottom and saute the onion over medium heat until soft.  Add the eggplant, and cook for about 10 minutes, stirring often, and adding olive oil to keep the pan from drying out.  The chef instructor says "eggplant is very thirsty, so add more oil for it to absorb."  Add the tomato paste, stir it around and cook until it turns to brick red, then add the tomatoes, quartered.  Turn the heat down a little.  Peel the garlic and crush it with the flat of the knife, then coarsely chop it and add it to the pan.  Add the zucchini and yellow squash (and peppers, if you must, but not in my house, thank you) and herbs (fresh or dried, to taste), and liquid - just enough so the veggies won't stick and burn.  You might need to add more liquid as it cooks.  Simmer about 20 minutes, add salt and pepper to taste.  When the eggplant is very tender, it's ready to serve.  Add more fresh herbs to the top, if you're of a mind to do so, or just serve.  I served it with chicken breast and French bread, and even my veggie-hating Patrick had to admit it was good.  His vegetarian girlfriend raved about it for about 3 days.  And I made it again 2 weeks later, that's how good it was. 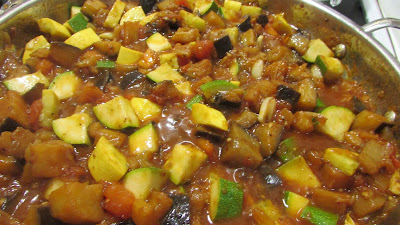 Cut out the stem.  Cut a cross in the skin at the opposite end.  Drop them into a pan of boiling water.  The skin will start to peel away pretty quickly - in 15 to 30 seconds in my experience.  Take them out, drop them into ice water so they cool, and peel away the skin.  Then cut them in half and squeeze out the seeds.  Save the water to add to the ratatouille.  I did this the first time, then just used canned tomatoes the second time.  It was easier, and didn't taste any different.  Just sayin'.

And, for the record, in addition to learning to cook, I'm also going to learn to draw, play the piano, speak French, take pictures, paint, improve my vocabulary, and brush up on some history.  Oh, and math.  Don't hold your breath waiting; I'm not that ambitious.  But it's nice to know all these options are there when I need to keep busy.

Happy weekending, everyone!
Posted by Marjie at 10:41 AM 4 comments:

....although I might just jinx it using the name of the season.

Thatcher and I found these flowers peeking through the leaves and debris in our yard. 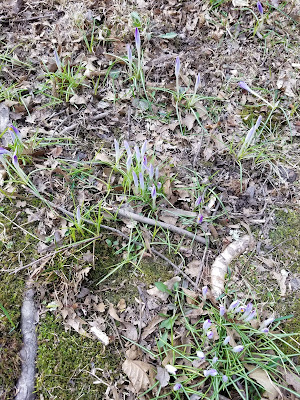 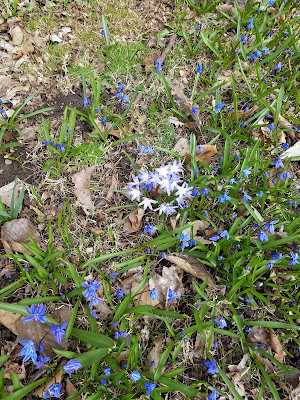 Thatcher promptly took up rolling in the crocuses, and then tried eating the leaves.  Silly boy.

Maybe more flowers will peek out soon.  The trees are breaking bud, which means that the buds will soon be dropping all over the cars.  Ugh.

And, if you care, we're still on baby watch.  She's due May 1, but who knows what will happen.  I'm ready to roll whenever I get the call.

Happy Thursday, everyone!
Posted by Marjie at 2:50 PM 5 comments: