So. I got up Tuesday morning and my tongue hurt.  Trying to eat my oatmeal, I discovered why: an ancient filling was falling apart.  Off to visit Kevin, my dentist, and you know how this goes:

Kevin: "You need a root canal.  What are you doing this afternoon:
Me: "Evidently, getting a root canal, but only if you'll do it."
Kevin: "How does 2 o'clock sound?"

I wasn't in the mood for either cooking or eating that night, obviously, and then Ryan suggested soup as tasty and easy to eat. Sometimes I swear the kid's a genius!

In your soup pot, melt the butter, then cook the chicken and onion at medium-high heat.  Add the celery when the onion is soft, and cook until the chicken is lightly browned on both sides.  Add the carrot, vegetable and chicken base, rice and water, bring to a boil, then reduce the heat and simmer for about 15 minutes; add the cauliflower, and simmer another 15 to 20 minutes, until the cauliflower is soft..  Add the milk, reheat to just below the boil, stir in the cream and add pepper to taste (I used 30 turns). 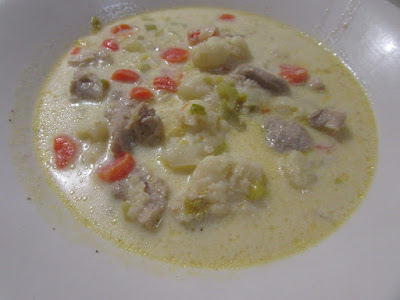 I ran a hand blender through mine to bring it closer to a puree, but the boys ate theirs straight.  And they loved it.  There was just enough for each of them to have some for breakfast the next day, and poor Thatcher wondered why he didn't get his share.  I served it with a cottage cheese bread, which the boys also loved. 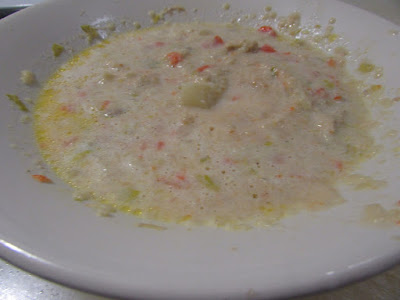 And later that night, Ryan proved why everyone thinks he's a great guy.  He was out playing chess with friends, and a friend of a friend was showing off his car which had a flashing check engine light.  That made Ryan nervous, so when they were all going home at 2AM, he followed Mr. Check Engine, and, sure enough, his car started smoking from the hood. Ryan called AAA and had the guy's car towed, then gave him a ride home.  Yes, that's one great guy we raised.

Happy Wednesday, everyone!
Posted by Marjie at 12:52 PM 6 comments: