How Can He Be That Old? 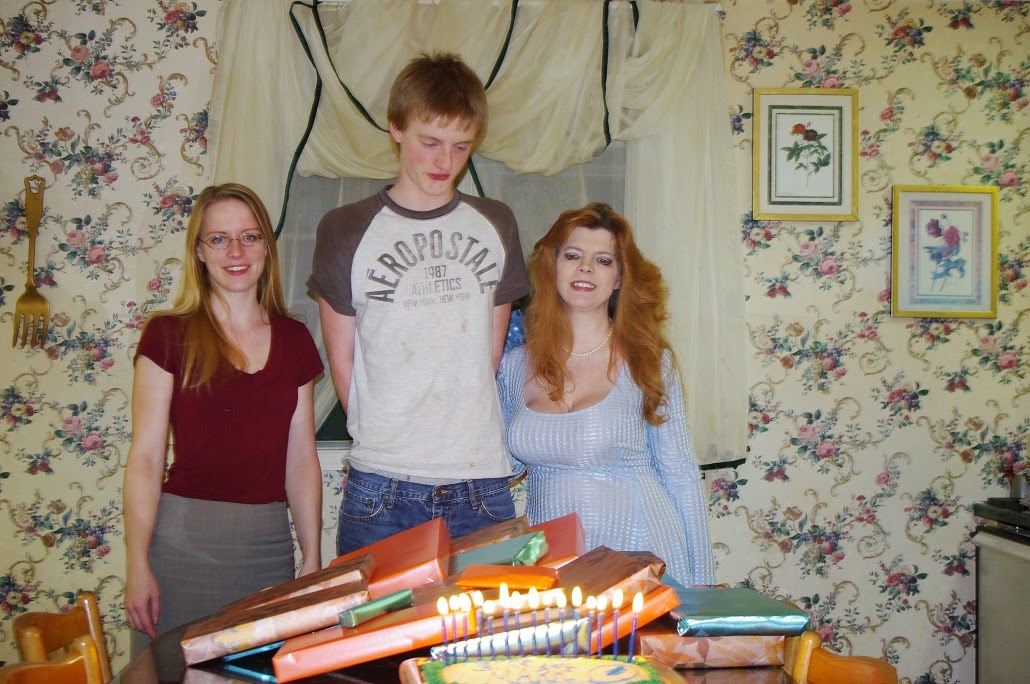 Shannon and Natasha were here to celebrate.

How can my baby be that old already?

Happy Thorsday, everyone!
Posted by Marjie at 3:47 PM 8 comments:

Yes, I know it's Wednesday.  Tuesday escaped from me while I was making other plans.

Natasha was here this weekend, and went outside to find the fall colors. 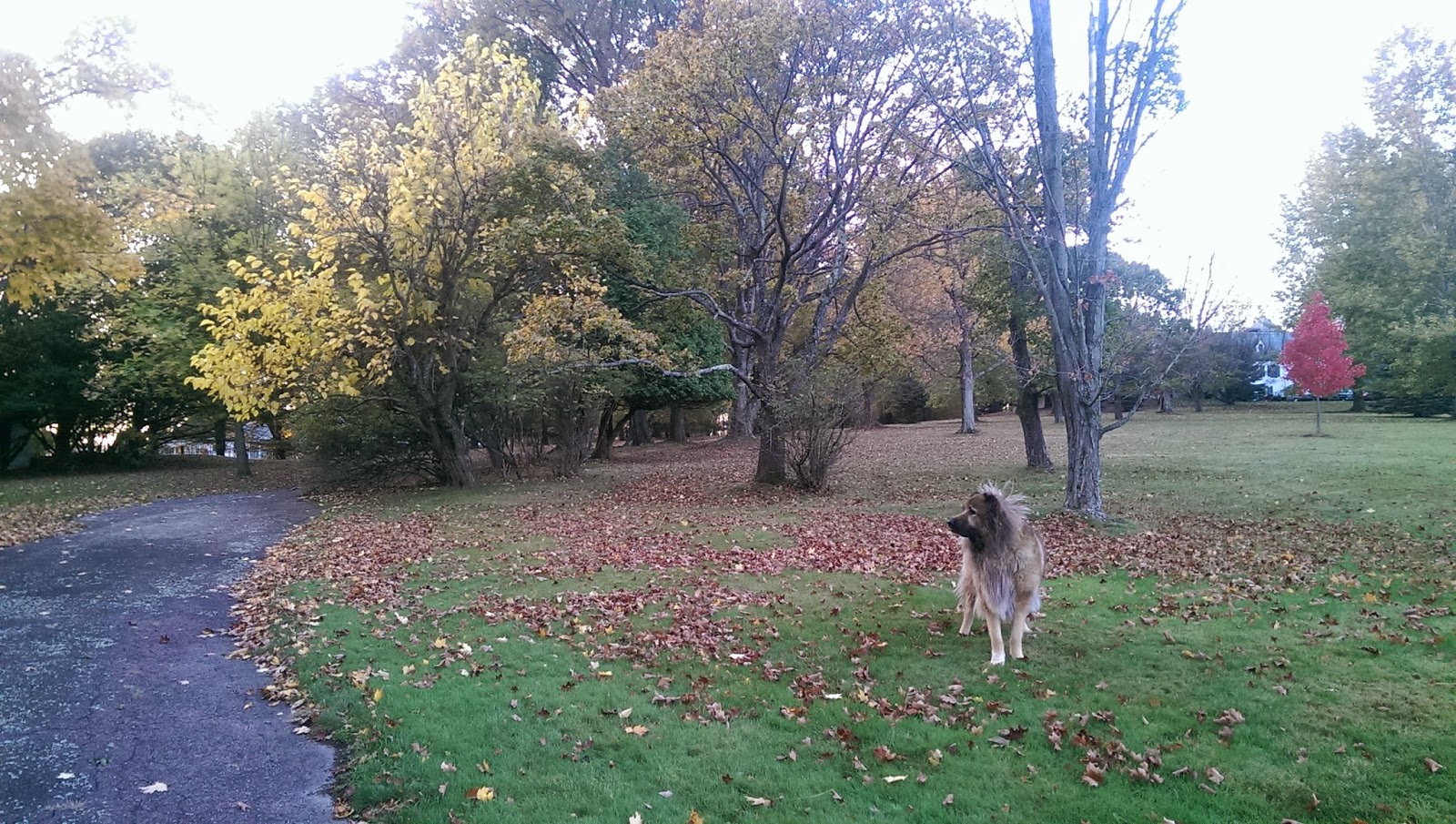 OK, so maybe she was in search of a nice soft spot in the grass, so she could roll around.  Or she could have been chasing her tennis ball.  You never can tell with dogs.

How are your fall colors?
Posted by Marjie at 3:01 PM 9 comments:

Early birthday flowers and some of the loot from the pumpkin patch: 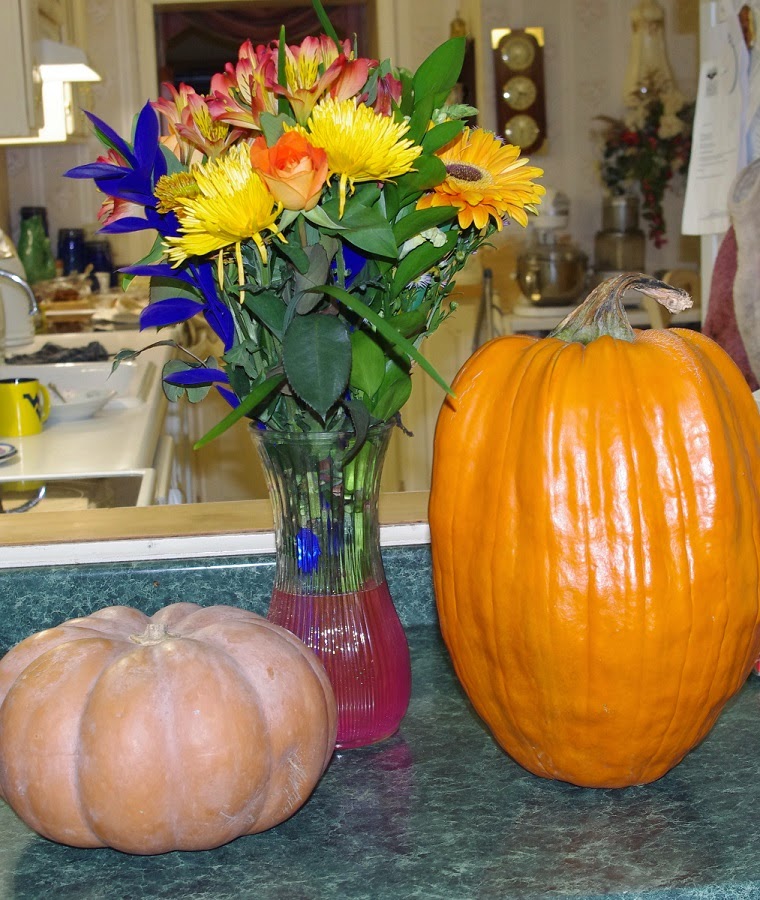 Happy Wednesday, everyone!
Posted by Marjie at 3:49 PM 9 comments:

Email ThisBlogThis!Share to TwitterShare to FacebookShare to Pinterest
Labels: Wordless

While we were at the book sale, Shannon's boyfriend, Natasha and Mark were gathering firewood so we could have a Saturday night bonfire.  I'm pretty sure Natasha was no help whatsoever, but Boyfriend surely had fun.  He found part of a tree down in our woods, and hauled it to be axed. 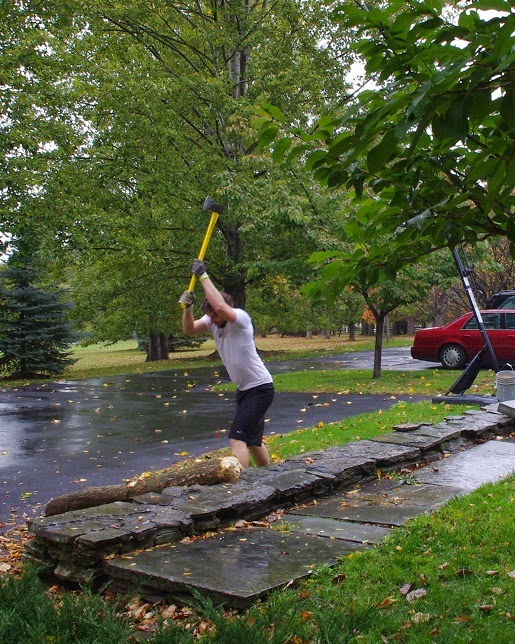 And then he gave Mark axing lessons. 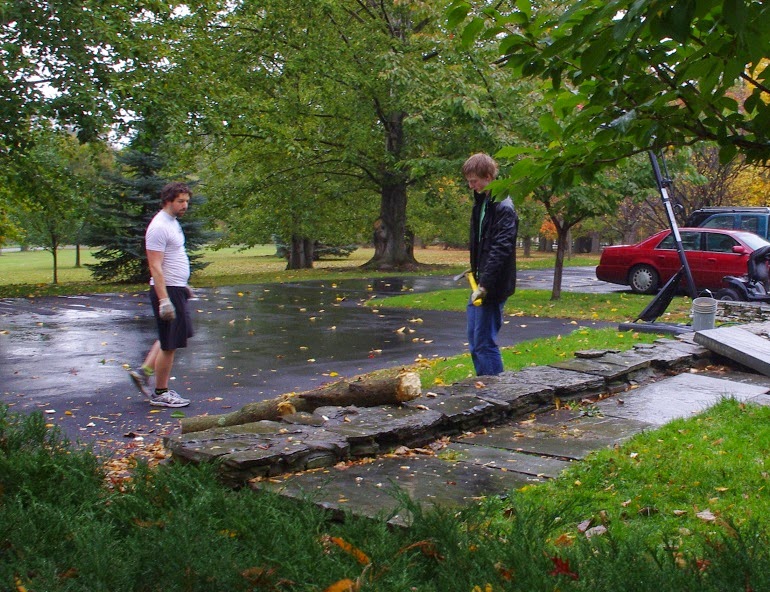 Mark even began to look competent. 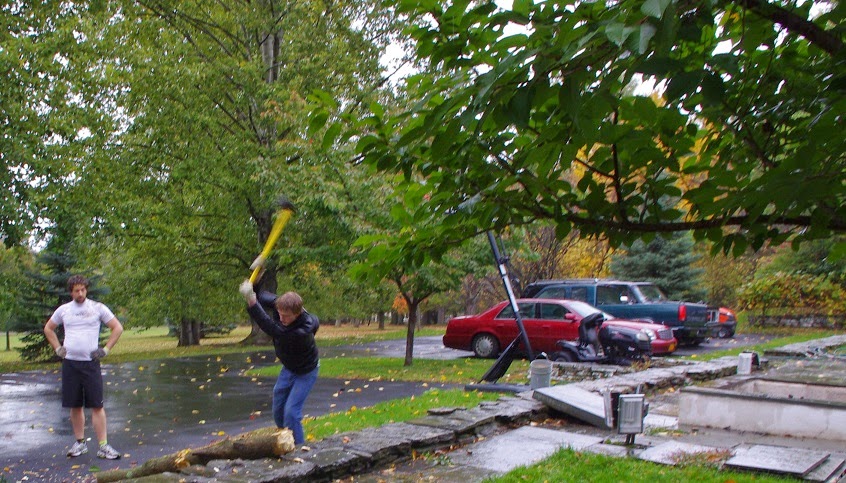 I believe they left sufficient wood to hold a Thanksgiving bonfire, too.  Hopefully it will be neither drizzling nor snowing then.

And in the background, you can see that we don't have much color showing.  Everything is still pretty green.  It got much colder Saturday, so that will be changing.

Happy Garden Tuesday, everyone!
Posted by Marjie at 1:43 PM 6 comments:

The book sale was this weekend!  Jeffrey and his girlfriend had come up Friday night; she was very excited about going to buy books. 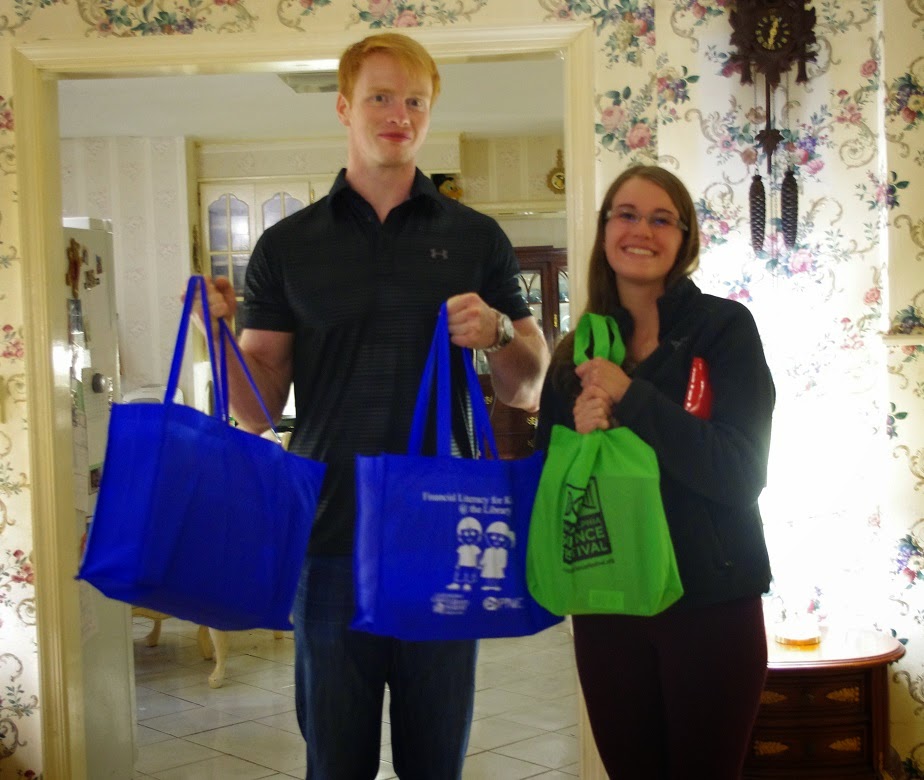 She's a sweet girl.  She was very happy when I told her I was paying for her books. 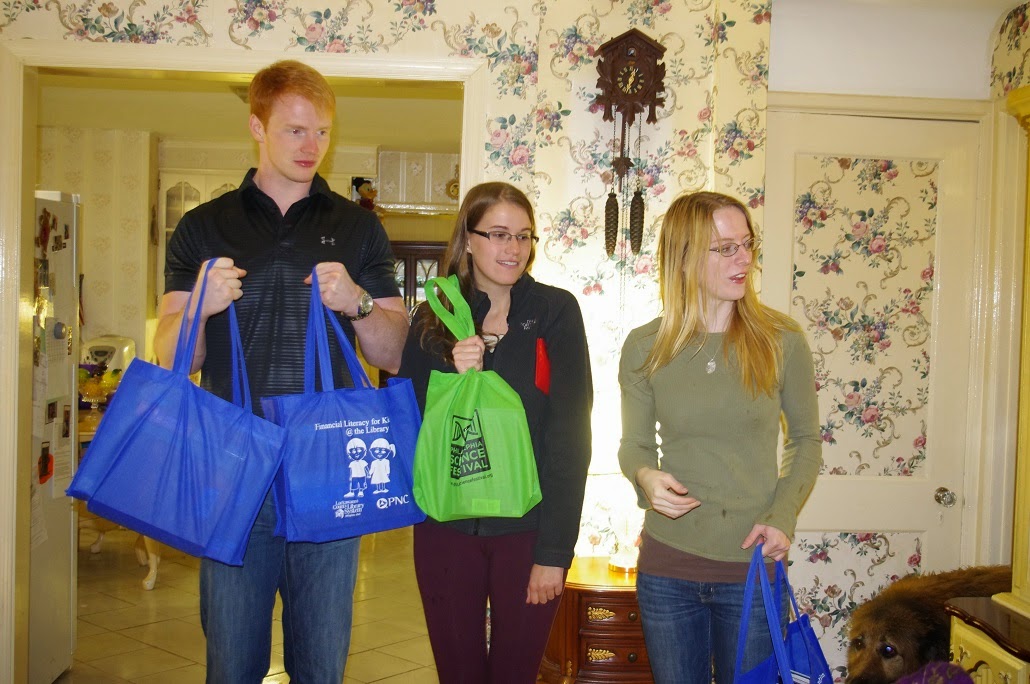 Natasha was very upset when Shannon got into my car without me, and was hopping up and down in glee when we returned.  It was very funny.

These are the books I bought for Jeff, his girlfriend, Cass, Kellie, the relative in Denver, and even 5 for myself.  I'm sure that you all remember that I have "too many" books, so I'm not buying any more.  And by "any more", I'm sure I mean "many more." 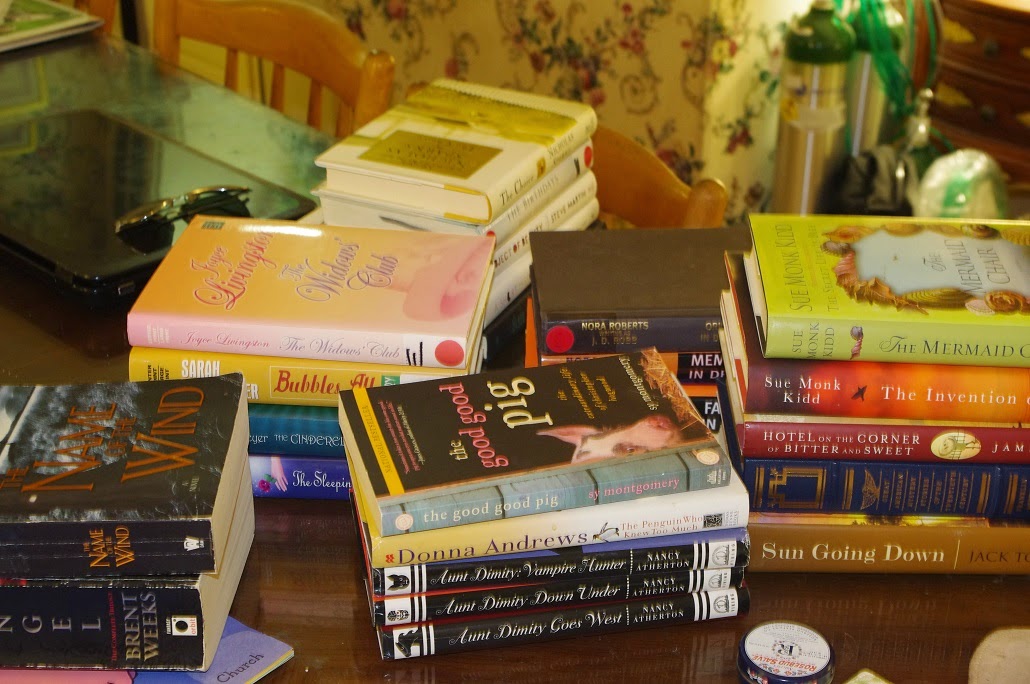 I hope you all had a wonderful weekend!

This was another library used book sale find.  I enjoyed the movie, and so I had to have the book. 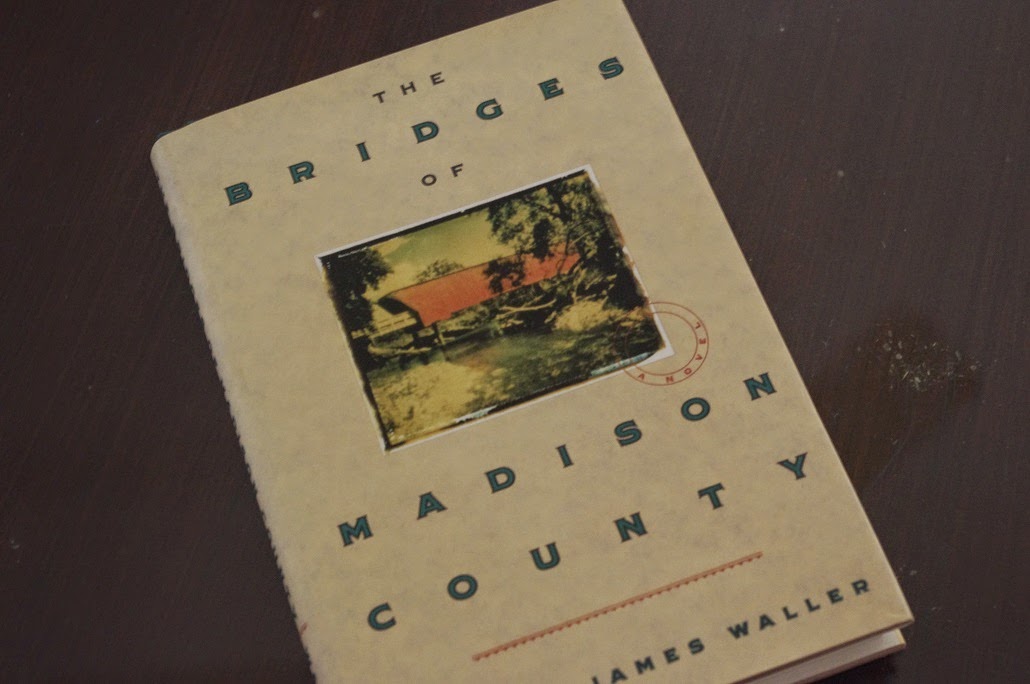 The opening of this book sets it up as if it's a real story; the children of a woman recently deceased presents letters and other personal items to a writer, and asks him to write their mother's story, and find the man in the story.

Set during a hot week in August, 1965, Robert Kincaid is a National Geographic photographer assigned to photograph the seven covered bridges in Madison County, Iowa.  During the road trip from his home in Washington, he finds several other sites he'd like to photograph at some point.  Upon his arrival in Iowa, he seeks directions to the bridges, but one is elusive - until he sees a farm wife outside her house, and pulls into the driveway to ask directions.

Francesca Johnson is the Iowa farm wife.  She was a war bride from Italy who took the best of the options remaining for her after World War II.  Her husband and children were showing steer at the state fair during the week, leaving her relatively free.  The photographer who pulls into her driveway is unlike anyone she knows - a "hippie", as he's called by the townsfolk.  She takes him to find the last bridge, just down the road, and invites him to dinner.  The relationship blossoms from there.

You know from the beginning of the book where this is going, and that makes it all the more poignant.  There are chapters at the end which show what happened after that week, and how bittersweet life can be.  "The old dream were good dreams; they didn't work out, but I'm glad I had them."

This book haunted me for a couple of days.  It made me more mindful of just how fortunate my life has been, and how fragile and fleeting happiness can be.  The movie was good, and the book far better.  5/5

Happy Thorsday, everyone!
Posted by Marjie at 4:36 PM 6 comments:

Well, it's been a pretty warm October, and surprisingly few of our trees have turned colors.  I was helping Mark identify trees for a leaf-gathering project he had to do for Biology, and took some pictures of our trees while he was at it.  Hey, someone had to point out 10 species of tree, and that boy is pretty oblivious!

Anyway, enjoy many species of tree, located right here in my little corner of the world. 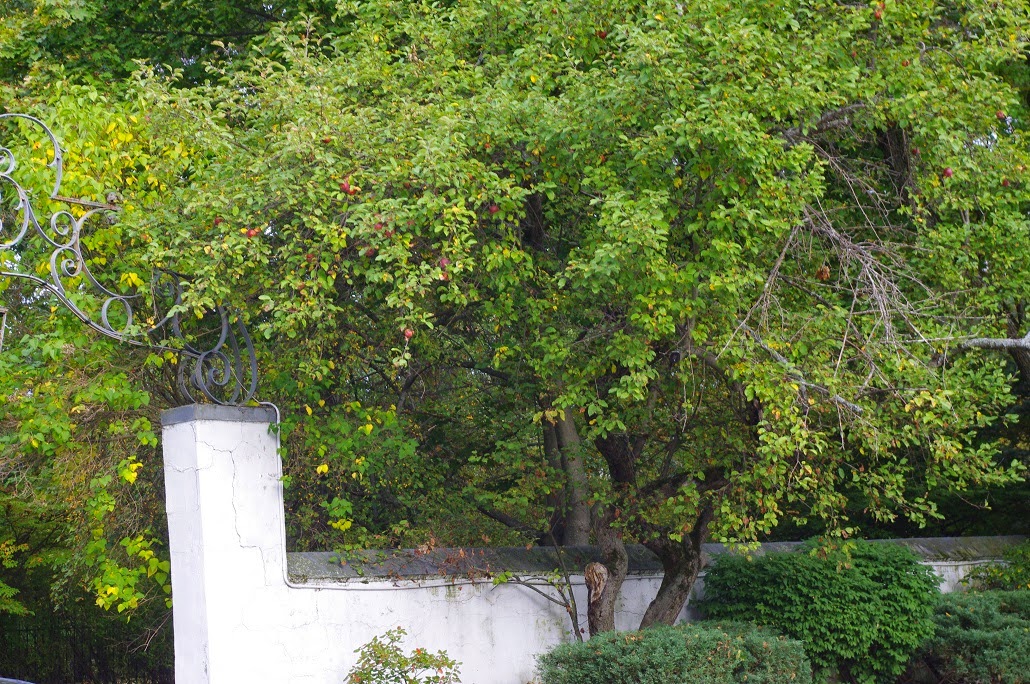 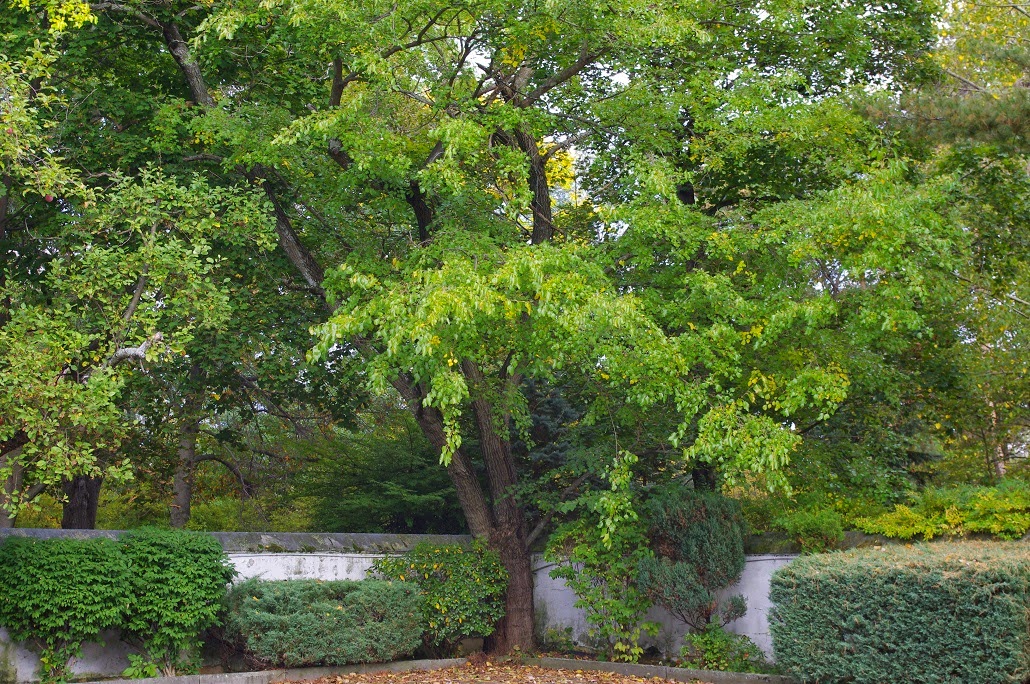 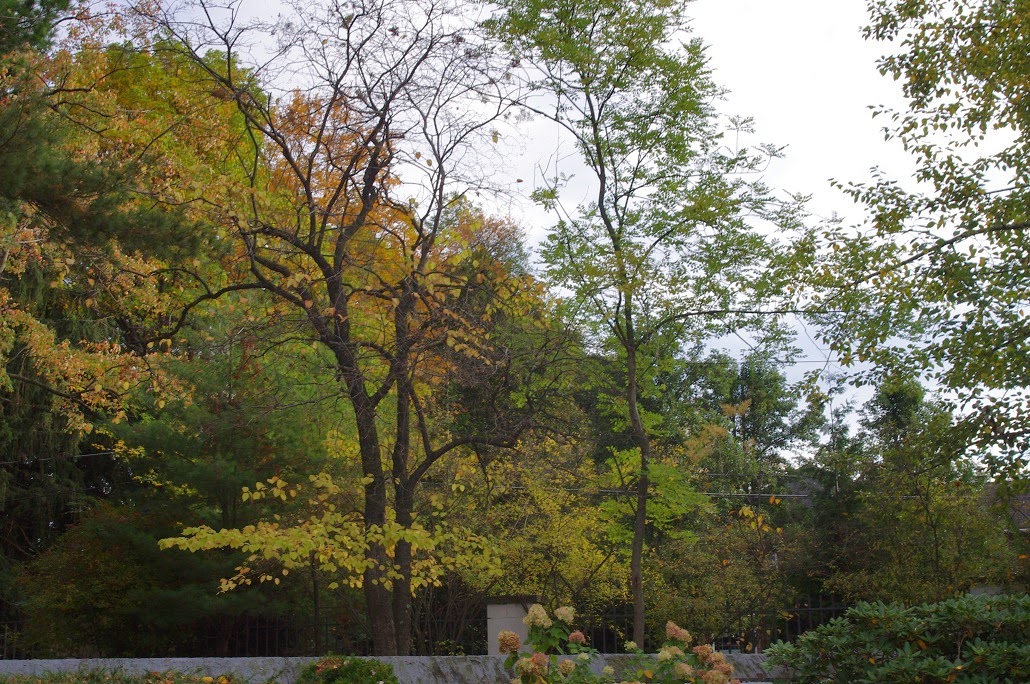 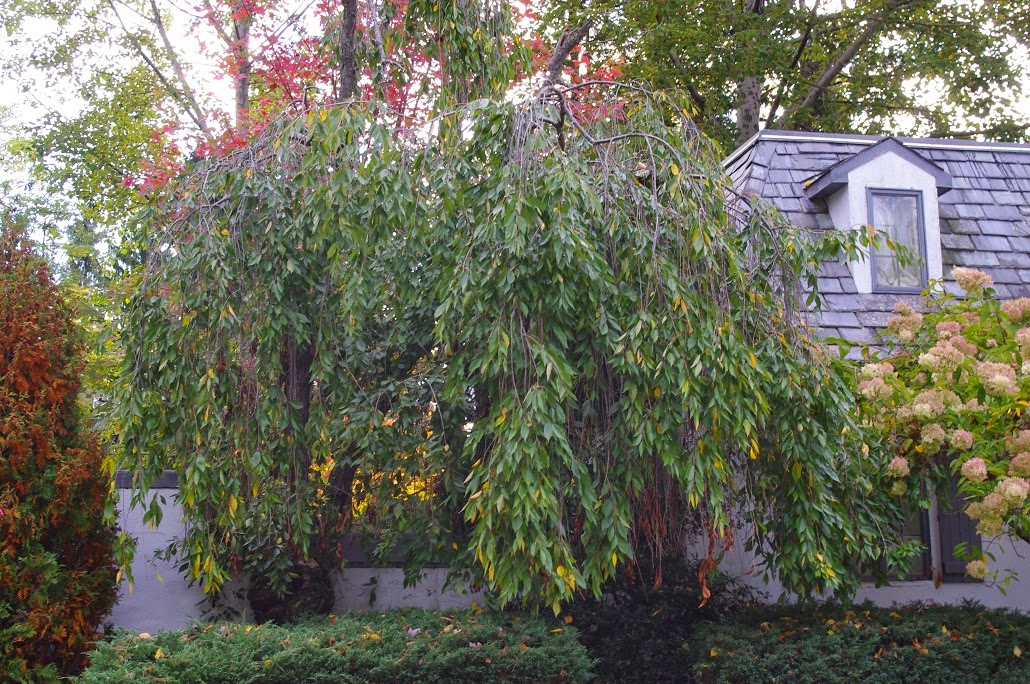 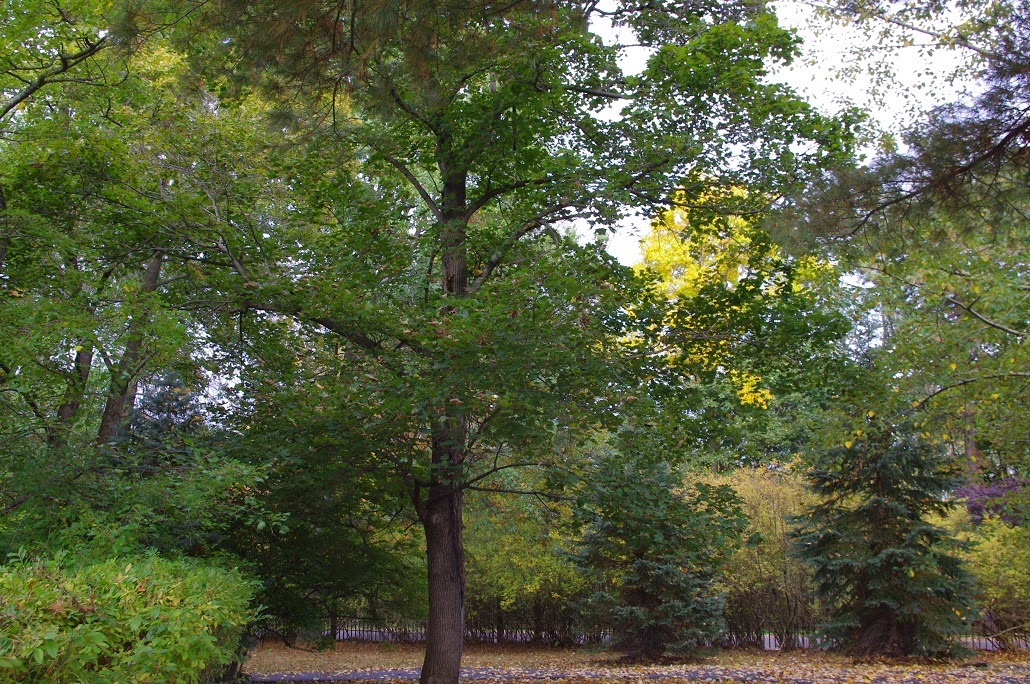 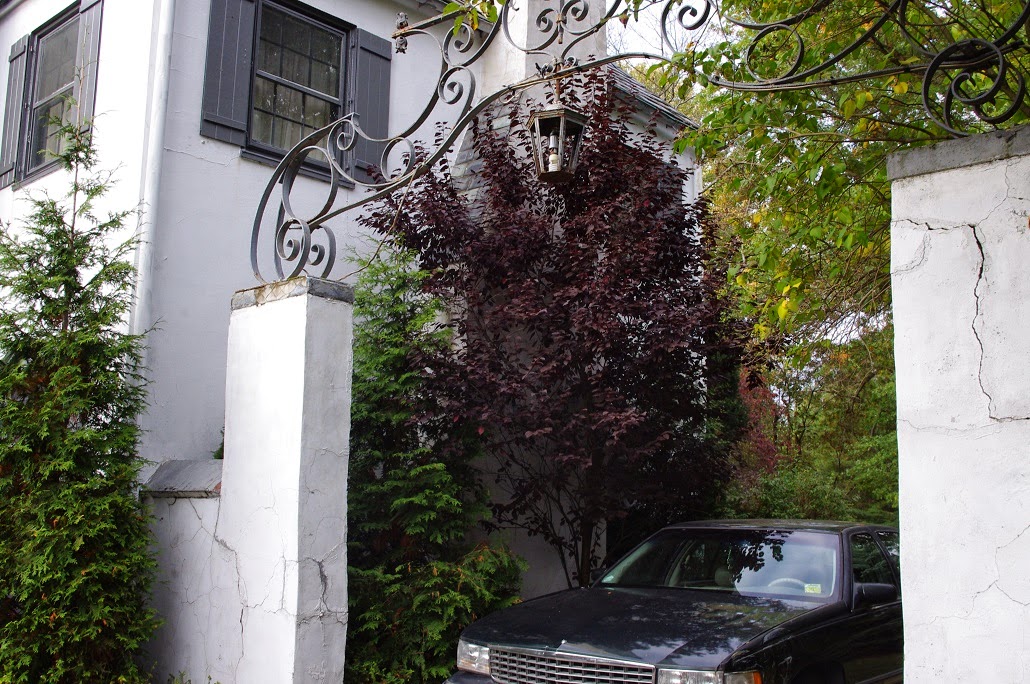 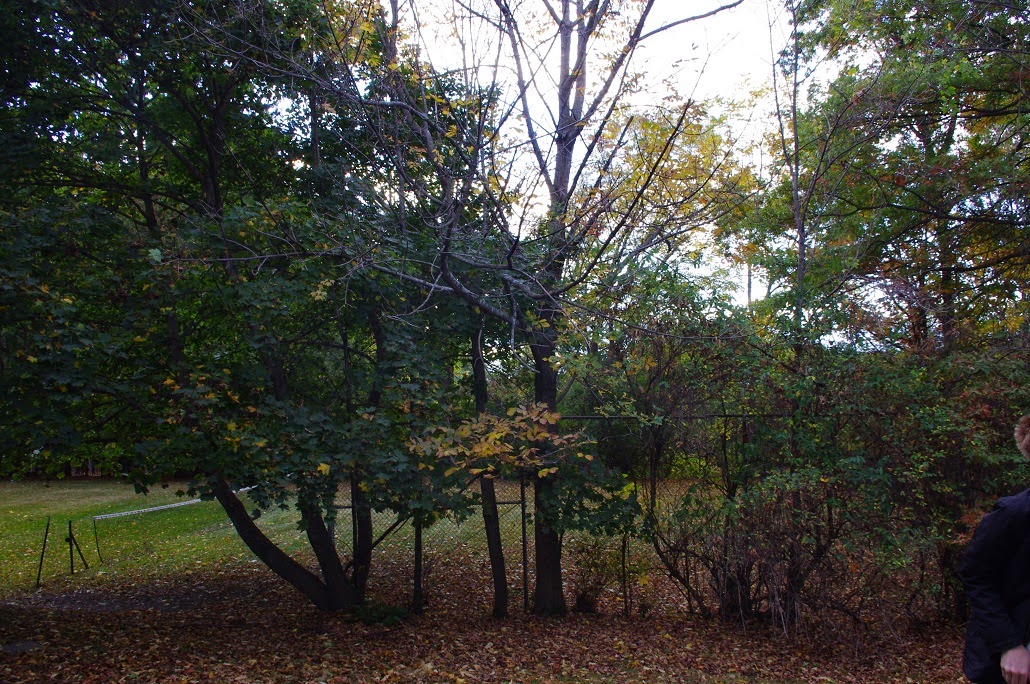 Black Walnut, way up there: 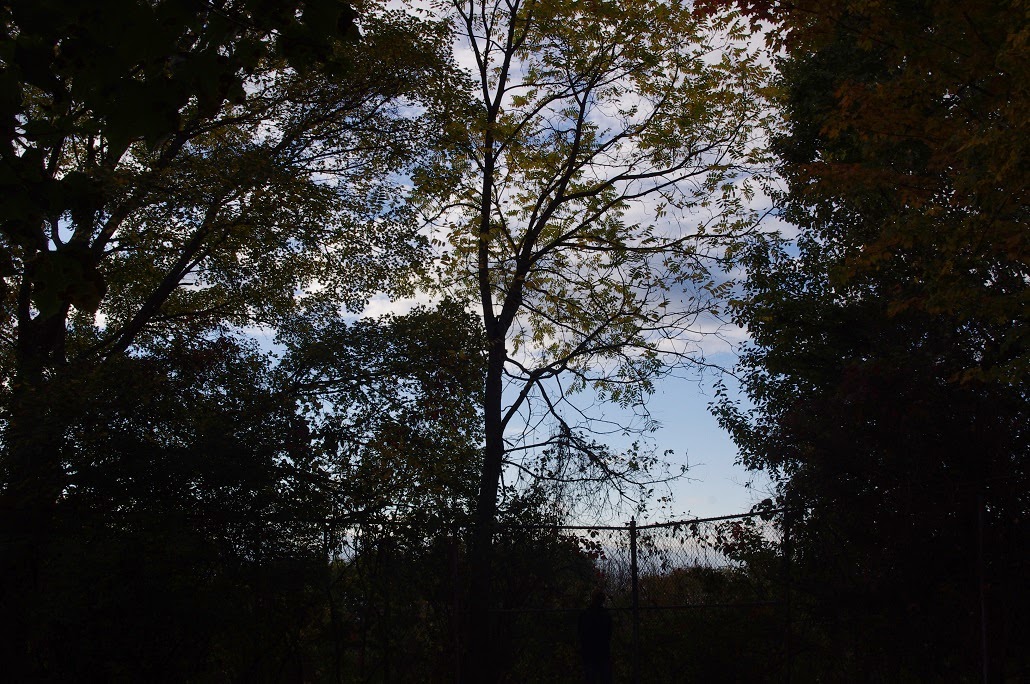 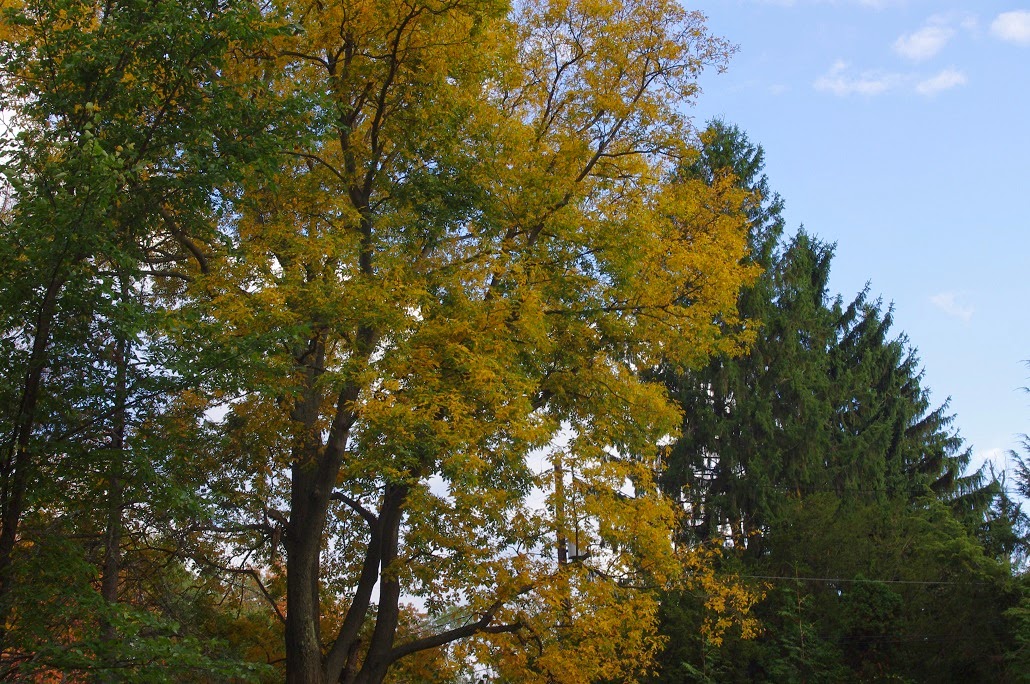 That's it!  Happy Garden Tuesday, everyone!
Posted by Marjie at 4:10 PM 12 comments:

Or, as Mark's History teacher so eloquently said, "Let's celebrate Columbus REdiscovering America!"  Because, of course, the Vikings had arrived about 500 years earlier. 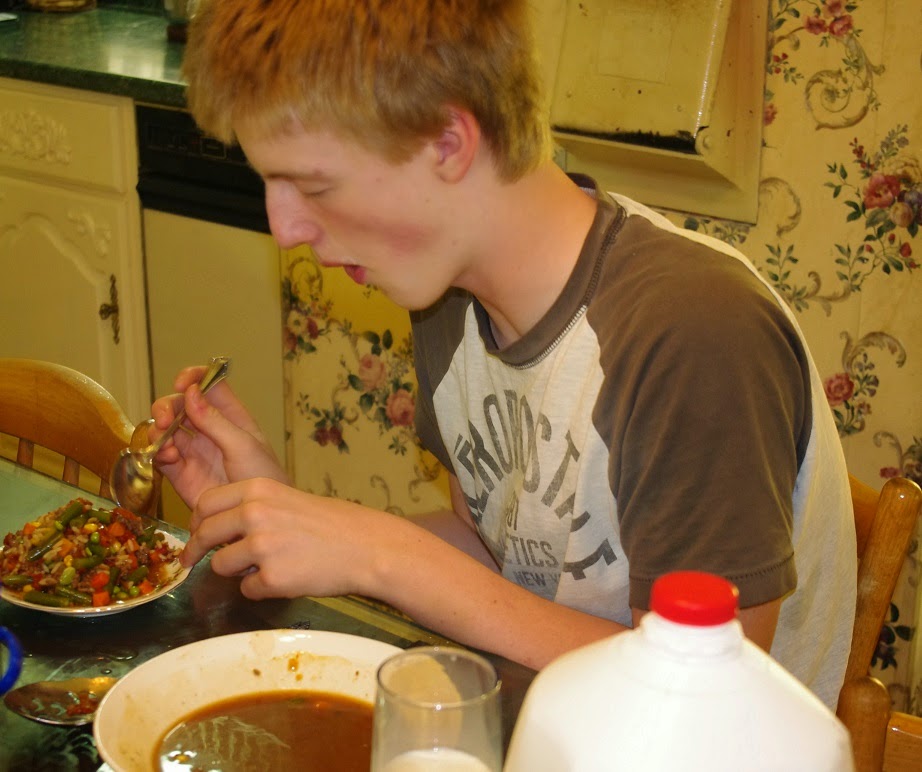 Mark announced that soup would be better if you had your veggies and meat on a plate, and the broth separately.  So I let him try it.  He does not recommend it; said the broth tasted like gravy.

Happy Monday, everyone!
Posted by Marjie at 12:47 PM 8 comments:

I know this is way out of character for me.  Wednesday our water heater sprung a leak (and didn't get replaced until Friday), and Thursday I had to take Mark for a flu shot (we parents got ours at the pharmacy last week).  So here I am, finally getting to my Thorsday Book Review.

Our oldest son, the finance professor, has had a long running dispute with his parents as to whether globalization and moving all of our manufacturing overseas is a good thing.  He says it's better for everyone to get cheaper stuff, and we say that those people who worked in manufacturing can't buy the cheaper stuff without those good jobs.  Service jobs can never pay as much, and not everyone is college material.  Sorry that's not politically correct, but it's the truth.  It's also the truth that not everyone can get an education in the "STEM" fields - science, technology, engineering, math.  Some people's brains just aren't wired that way.  Anyway, this book was reviewed in the Wall Street Journal a couple of months back, I bought it, my dearly beloved read it and sent it on to our son, so I had to buy a second copy for myself.  And now I can review it for you. 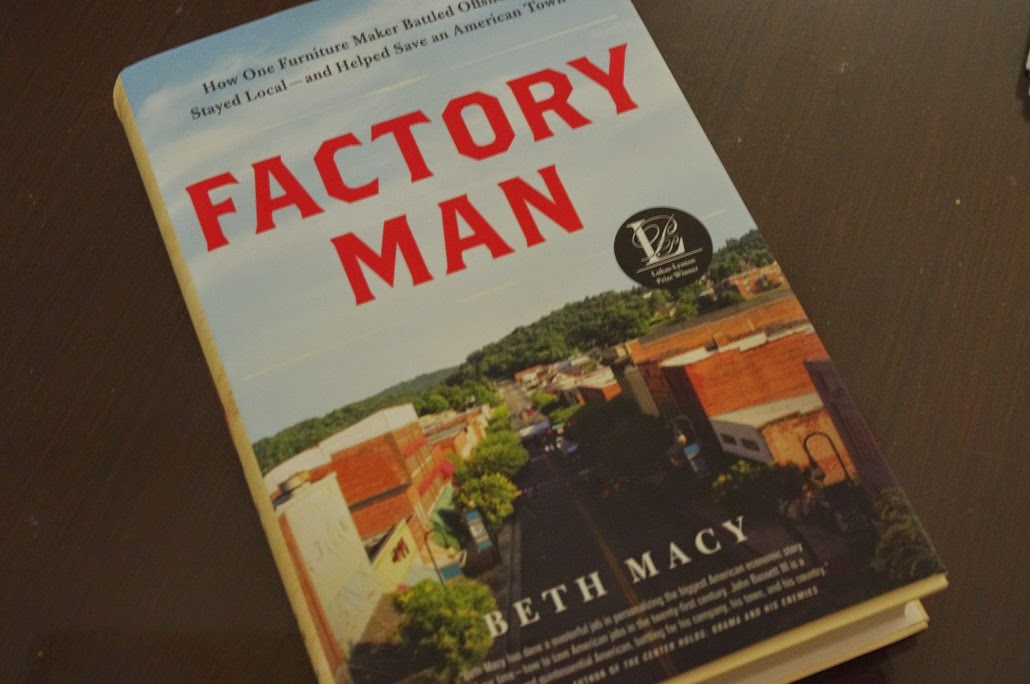 
This book takes a look at globalization from the point of view of the affected: the factory owners and workers.

Beth Macy states that this book started as the story of how the recession affected ordinary people and displaced workers; when she started it, of the articles published about the recession, 98% told the story from the point of view of big business and the Obama administration, and only 2% about the people affected. This book certainly addresses that imbalance. The opening paragraph in chapter 1:

"Once in a reporter's career, if one is very lucky, a person like John D. Bassett III comes along. JBIII is inspirational. He's brash. He's a sawdust-covered, good old boy from rural Virginia, a larger-than-life rule breaker who for more than a decade has stood almost single-handedly against the outflow of furniture jobs from America.
"'He's an as****e!' more than one of his competitors barked...."

Early on, Beth Macy quotes Thomas Friedman from his book The World is Flat: "Globalization saved American consumers roughly $600 billion, extended more capital to businesses to invest in new innovations and helped the Federal Reserve hold interest rates down, which in turn gave American a chance to buy or refinance homes." This is my son's argument also; however, my point has been that those former furniture workers in Bassett, Virginia can't buy those terrific cheap goods without the furniture jobs to pay for said goods.

"To most economists, factory work was a throwback. It was still okay to work in health care, retail, recreation, insurance, hotels and haircuts. But it wasn't cool anymore to actually make stuff." As a result, 5 million factory jobs have been eliminated since 2000. There are an awful lot of people out there who don't want to go on to college for whatever their reasons: financial, inability or simple lack of interest - maybe they like making or fixing things. But increasingly, there's no place for them to make a good middle class living. This book looks at some of those people.

But it does take a while to get to that point. Beth Macy starts out looking at the history of the Bassett family, from their settlement in Henry County in 1791, through the Civil War, when the extended family had over 21,000 acres of land; then through the period of trying to figure out how to make a living, initially by sawing lumber for the railroads, then through a sawmill, and finally to making furniture. It details the history of the founding of and expansion of the Bassett Furniture Company, and the family's assistance to other relatives in starting furniture companies of their own in southern Virginia. The book covers the feud between John Bassett ("JBIII") and his brother-in-law, ultimately leading to JBIII's founding of the Vaughn Bassett furniture company, and his strike against the Chinese furniture companies copying his designs and dumping them inexpensively - below cost to manufacture - in America.

I don't know that this book alone would change the minds of people who believe that we ought not to manufacture things here. And I certainly don't think that we could continue to employ the vast numbers of people in manufacturing that once held such jobs - automation will always preclude that. I also question whether Western companies should move their production to wherever the labor costs are cheapest, at the expense of their own countrymen's financial well being. But this book does give a rarely-expressed look into the subject, and is well worth the read.  5/5

(There was one more thing that made me want to read this book.  Back in 1986, we made an offer on one of the Bassett family houses in Bassett, Virginia, which is mentioned in this book.  It was initially accepted, and the acceptance was rescinded, because our offer was 1/3 of what the Bassett heirs had claimed the house was worth when  they donated it to a college in Virginia.  Reading what has happened to Bassett, I'm not sorry we don't live there.)

AND, the final item: My giveaway of The Yellow Room.  I had two people who wanted it: Audrey and Pam in Oregon.  Audrey, you can have it; just leave me your address (which I will delete as soon as I read it) so I can contact you.  And Pam, I have another book I think you will enjoy, and I'll send that to you, if you give me your address!

Happy Weekending, everyone!
Posted by Marjie at 5:04 PM 7 comments: