For 10 days, through last week, I had the ever charming Maddie and her little brother, affectionately called "5" by his uncles, while my son went to Nova Scotia for a symposium or meeting or something-or-other (I try not to remember; he's always busy) and then a couple of days down-time.  "Of course I'll keep the little ones!" You all can just hear me saying that, right?  Yeah, and they're planning another visit to Camp Grandparents in January.  Fun, fun.


Talking to her brother.  It looks like he's sharing the Cheerios, but, trust me, nothing could be farther from the truth.  He's just barely allowed to look at her. 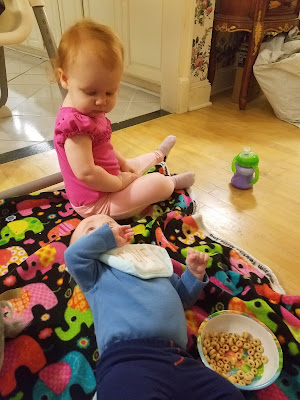 Brushing her hair with her great-great-great grandmother's brush.  This is actually a sterling clothing brush from around 1900, but the bristles are so soft that with a little shampoo, it was perfect for baby hair brushing. 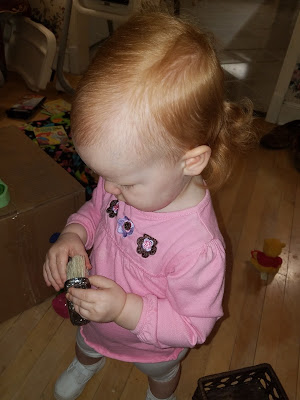 And while Little Miss brought her own toys, and had some of ours, she ultimately found Grandma's toys in the cupboard.  They make a great tower, don't you think?  Grandma was really unreasonable and wouldn't let Maddie play with the glass jar of marinated artichoke hearts; she mumbled stupid things like "Oh, that can break."  Stupid Grandma. 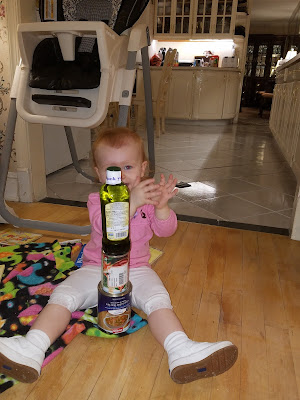 And, last weekend the girls and I threw a baby shower for Erin, the bride from about 7 years back.  Her baby is actually due on my birthday, but since it's supposed to be a boy, they won't be naming it after me if he arrives on his due date.  I can live with that.  To be fair, when I say we threw a baby shower, I mean that I paid, and made the favors, and the girls did about everything else.  The theme was dinosaurs, and look at this wonderful dinosaur nest, complete with eggs, that Shannon made! 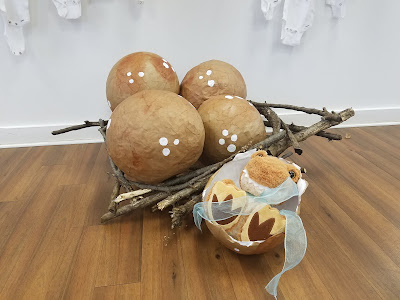 So, I'm going to try to get back here more often; I'm even trying to figure out how to cook for only 3 people, without too much in the way of leftovers.  The jury's still out on my success there.

When we got here, there was one large, beautiful hydrangea in a corner in front of the house.  It has gotten bigger despite our efforts to keep it trimmed and marginally under control...

A few years back, an early snowstorm took down two of our giant arbor vitae near the hydrangea.  We had our tree guy stand them back up; he installed guy wires to hold them in place, and fertilized the tarnation out of them.  They thrived, and so did the hydrangea.

2 weeks ago, this was the hydrangea, having taken on a little bit of a pink tinge.... 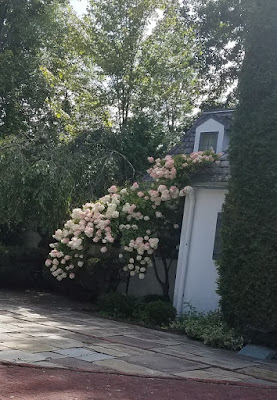 And this morning, the fertilizer which had migrated from the arbor vitae has done its job, and really added some vivid color to the hydrangea; it's even brighter in person.  I don't know why the camera washed it out. 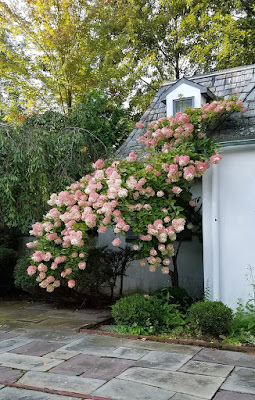 So, the early fall here is starting out pretty.  We'll have to see how the leaves go (and the colors should be great because it's been a very wet year), and see if we get the "promised" rough winter.

Happy Garden Tuesday, everyone!
Posted by Marjie at 1:19 PM 5 comments:

16 years ago was the third attack upon American soil since our great nation was founded (The War of 1812's invasion of Washington by the British, Pearl Harbor, and 9/11). Today, our hearts are with those who survived the collapse of the Twin Towers, and with the families of those who were lost in the Towers, the Pentagon, and especially on the 3 jet liners. Our gratitude to the families of the passengers on the fourth jet, who bravely took over and crashed that plane to save our nation's capital from further destruction. We will never forget.
Posted by Marjie at 10:36 AM 3 comments: