On the front of yesterday's Wall Street Journal was a banner which declared: "How to Make Your House Look Smarter (even if you aren't)".  The article, in the fourth section, said to have books.  Lots of books. 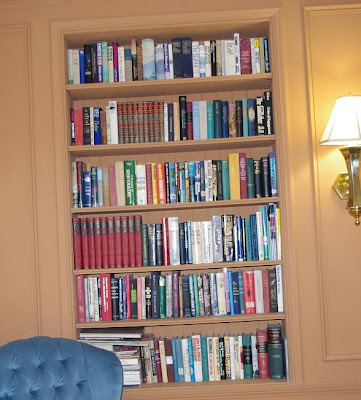 How am I doing?  Bear in mind that this probably isn't more than 15% of my books.

Anyway....
This is a double book review: an e-book, and a real book; a thriller and chick-lit.

TEARS IN TRIPOLI
by Paul A. Rice
copyright 2012

Jake Collins is a retired British Special Forces soldier, who works as a private security officer in dangerous places.  When this book opens, he's been hired to protect a newscaster named Andy who's going to Tripoli during the Libyan uprising.  Of course, there are no direct flights to Tripoli, so Jake flies into Tunisia, is taken by a driver named Mus to the border, from whence he rides with a driver named Raouf.  Entering Libya from a southern border crossing and driving north to Tripoli, Raouf proves helpful with his friends and relatives at every checkpoint, and ultimately in Tripoli.  Jake is one of a team of protection agents assigned to two news crews, including his journalist, who turns out to be "Andi", a blond bombshell he'd noticed in an airport before he arrived in Tunisia.  The book was very realistic, with actions having real consequences, and set during the couple of weeks during which Gadaffi's regime was toppled.  All in all, it was a good read.

I got this as a free e-book during a promotion; it's available in Kindle format and paperback.  I think that if copies of the paperback survive long enough, it will be considered good, accurate historical fiction.  And that's what I liked most about it.  4 stars out of 5. 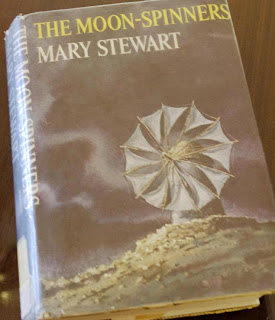 Mary Stewart's books are somewhat formulaic, and comforting to read.  They always involve a plucky British heroine, usually on vacation somewhere else, handsome men and danger.

Nicola Ferris is a 22 year old junior secretary at the British Embassy in Athens.  When her cousin Frances wants to come to Greece for vacation, Nicola eagerly meets her at the seaside village of Agios Georgios on Crete.  She had been given a ride to the footpath to that village by the Studebakers, who "...were both lavish with that warm, extroverted, and slightly overwhelming kindliness which seems a specifically American virtue."  Since Nicola's a day early in arriving at the village, she decides to walk up a path beside a stream for lunch, and, after a couple of hours hiking, she finds herself being taken hostage by Lambis, who is trying to protect Mark, who was shot after they stumbled upon some locals and a dead body.  Of course, the next day she went about her business, while trying to assist Lambis and Mark,  Of course, Frances helps out, and all is well.

The title "Moon Spinners" refers to a legend that three spinners pull the moon out of the sky, spinning it down to earth, until it's gone, so there will be a night of darkness when everyone can sleep.  Mary Stewart included a description which made me think of Chan, of a woman spinning:  "The soft, furry mass of white wool on the distaff, the brown fingers pulling it out like candy-floss to loop across the front of the black dress, the whirling ball of woolen thread on the spindle...."  Being able to relocate melodious passages like these is why I still love real books so dearly. This was a nice book, one that my friend GMarie might call a "cozy".  Even though you know to some degree how it will end, you want to read because you love the good guys, root for the underdogs, and boo for the bad guys, all in good fun.  Again, 4 stars out of 5.

This is one of those things that couldn't be easier to make, and everyone loves it.  Well, everyone except my littlest fussbudget.  He has to do something to prove he's a fussbudget, right?

You can make a white or yellow cake from mix or scratch, or a pound cake, or just buy one unfrosted at the store - it is, after all, summer, and therefore too hot for normal people to bake, right?  If you bake it, let it cool.  Pour 1 cup boiling water into a 4 cup measuring cup, sprinkle the jello over it, then stir with a wire whisk to dissolve and blend thoroughly.  Add 2 cups of ice cubes, and stir with a slotted spoon until the jello starts to thicken and is partially set.  Using the handle of a wooden spoon, poke holes in your cake mercilessly - lots of holes, with about 1" of cake around each hole.  Pour the jello into the holes and over the top of the cake.  Frost with the whipped cream, refrigerate for at least 30 minutes and serve.

You can take this to a 4th of July picnic.  Use blue jello and red-colored whipped cream to be really festive looking, or be like me, and use whatever you have on hand.  Either way, it won't last long! 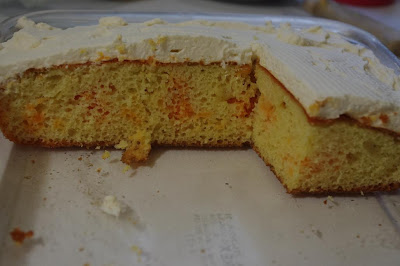 Since my daughter and I didn't coordinate our baking plans, I also made a pie for Father's Day dessert.  My dearly beloved loves pie above all other confections, so it was an easy thing to decide to do.  My biggest problem is always deciding to do these things hours ahead of time, as the cookbooks suggest, in order to let it cool.  So when you see my raggedy-looking cut pieces, you understand, right?

In a sauce pan, stir the sugar and cornstarch with a whisk to combine.  Add the water and corn syrup, and heat to a boil.  Add the cranberries, raisins and walnuts, return to a boil and cook until the cranberries pop open - about 4 minutes.  Remove the pan from the heat.  Stir in the butter until it's combined and melted.  Let the filling cool while you prepare the pie crust.  (See my recipe for the Best Ever Pie crust, or just use a frozen one - whatever makes you happy).  Pour the filling in the crust, and top with a second crust.  Bake at 425F for 40 to 50 minutes, cool and serve with whipped cream. 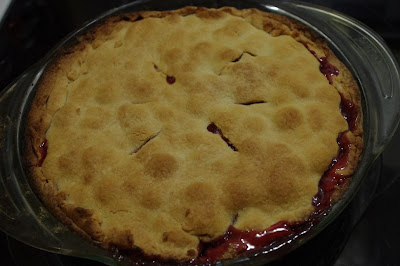 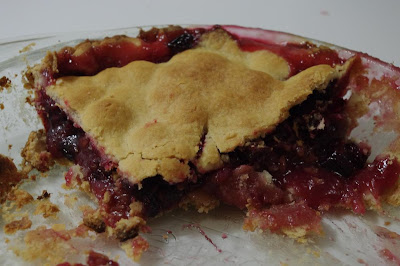 My dearly beloved loved this pie, although he opined that it needed whipped cream because it's pretty tart.  Dan said it made walnuts edible, and the little boys and Cass loved it.  Cass had a guest over, who said it was wonderful, and tasted like Thanksgiving.  I think that's pretty unanimous votes in favor of this pie!
Posted by Marjie at 3:10 PM 14 comments: 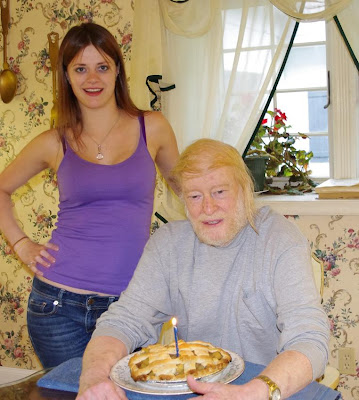 ...is your daughter baking you a pie.  And what makes an apple pie really great....

is when your daughter puts a candle in it, so it's more like a party!
Posted by Marjie at 1:36 PM 17 comments:

Oh, I've been cooking, because everyone else wants to eat regardless of my dental woes!  (Seriously, is anyone surprised by that?)  Meatloaf is pretty easy to break into little bits, so even we dentally challenged individuals can manage it, and it has the added benefit of being Ryan's absolute favorite meal.  So when it was 47 degrees the other night, after a rainy and chilly day, meatloaf was the centerpiece of the menu!

Chop the onions and carrot into a very fine mess, almost the consistency of mush.  Add the milk, salt and paprika, and blend briefly to combine.  Put the ground beef in a bowl, form a hollow in the middle of it, pour in the blended mix, and add the Worcestershire sauce.  Fold over until combined, then form the mixture into a loaf in a pan.  Sprinkle a little more Worcestershire sauce over the meatloaf, then cook at 375F for 40 to 50 minutes.  For gravy, combine 1 cup of water, 2 beef bouillon cubes and about 1 tsp Worcestershire sauce, bring to a boil, then whisk 1-1/2 tbsp cornstarch into 1/4 cup cold water and whisk that into the boiling liquid.  Cook until it thickens, adding a touch more liquid if necessary. 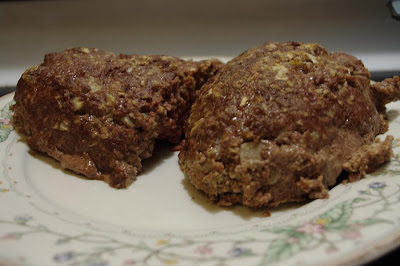 If you like to use a starch filler in your meatloaf, use 1 cup oats - quick or original.  I avoid that due to sugar/starch considerations, but the oats can be added with the onion mush, and 1/4 cup more milk.  I usually serve my meatloaf with a wild rice side dish and some green veggies, and never have any leftovers.  Sad, really, because it would make a great lunch the next day!

Hope you all have a great weekend planned!
Posted by Marjie at 4:23 PM 10 comments:

Email ThisBlogThis!Share to TwitterShare to FacebookShare to Pinterest
Labels: beef

Yes, we have a lot of those around here.  This weekend, it was my middle daughter's birthday.

We even dressed alike for the occasion.  OK, so the prints weren't identical.  But it was close! 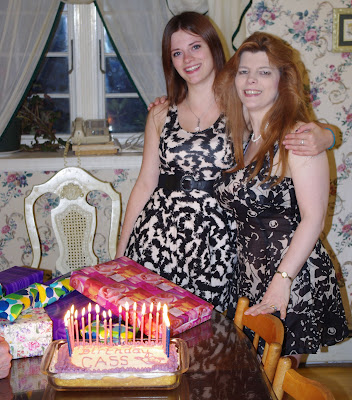 In honor of Ray Bradbury, who passed away yesterday at the great age of 91, I bring you one of his books.  I read this about 2 years ago, with Ryan, when it was assigned summer reading before he started his freshman year of high school. 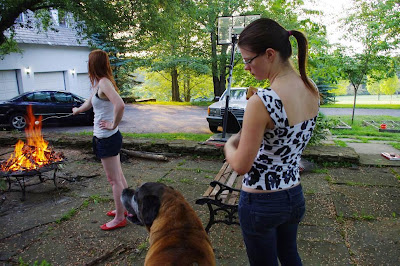 
Some time in the future, books are banned.  Televisions are everywhere, telling people exactly what "officials" want them to know.  No one needs to deal with messy things like religion, psychology, sociology, or anything that might make them unhappy.

In this world lives Guy Montag, married with no children.  He is a fireman; like all firemen, his job is to burn books.  They are not permitted to keep any of the books which are confiscated; that's an imprisonable offense.  But one day, Guy did just that.  His wife had been bothering him to work harder and make more money, so she could have a fourth TV wall in their house, because she spends all of her time with her TV family.  Then Clarisse  moves in next door, and she's a scholar, reading books and holding lively discussions with Guy.  This is what inspired him to secrete the first book, and to do it over and again.  One day, Clarisse simply disappeared.  Then Guy's wife discovered his cache of books and turned him in, forcing Guy to flee.

451 degrees Fahreheit is the temperature at which paper burns, thus the title of the book.  I truly enjoyed this book; it made me happy that we live in a time and place where we are free to read and do as we please, think what we like, and disagree with anyone, including the government.  It should not have taken Ray Bradbury's passing to make me write a review of this book, and everyone should read it and think carefully about the implications of a society where the government dictates more and more of what people can do and think.

Thor read this book with me and Ryan, smart guy that he was, and he would also implore you to read it! 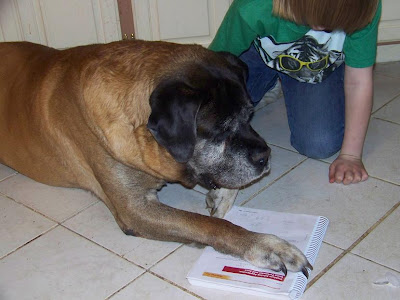 Edited to add:  Janet at Mystery Fanfare wrote about Ray Bradbury yesterday, and I learned this from her:
"He (Ray Bradbury) wrote “Fahrenheit 451” at the UCLA library, on typewriters that rented for 10 cents a half hour. He said he carried a sack full of dimes to the library and completed the book in nine days, at a cost of $9.80."
Posted by Marjie at 2:20 PM 13 comments: