Earlier this week, Louise posted a chiffon cake she'd made, and it inspired me.  So off to Fannie Farmer I went to peruse chiffon cakes, and found a recipe for Daffodil Cake, so called for its appearance, with an orange frosting!

Beat the egg yolks until thick; add the 1/4 cup sugar and beat until very light colored.  Add the orange extract and orange rind and set aside. (I added 3 drops of yellow food coloring because it didn't look yellow enough, and I didn't want my menfolk to complain about a lack of color).

Beat the egg whites with the cream of tartar, salt and vanilla until fluffy.  Add the 1 cup sugar a bit at a time and beat until stiff.  Sift together the flour, cornstarch and baking powder, and stir into the egg whites.  (OK, so I gently beat it in with my wire whisk attachment, and it worked fine.  But maybe you want to be a perfectionist about it.)  Take 1/3 of the egg white mixture and fold it into the egg yolk mixture.  Put alternating spoonsful of the white and yellow mixtures into a greased 10" tube pan (the recipe says ungreased, but I greased mine anyway), then bake at 350F for 28 to 35 minutes, until the cake tests done.  Turn upside down on a plate to cool before removing the pan from the cake.  Frost with Fannie's own Light Butter Frosting: 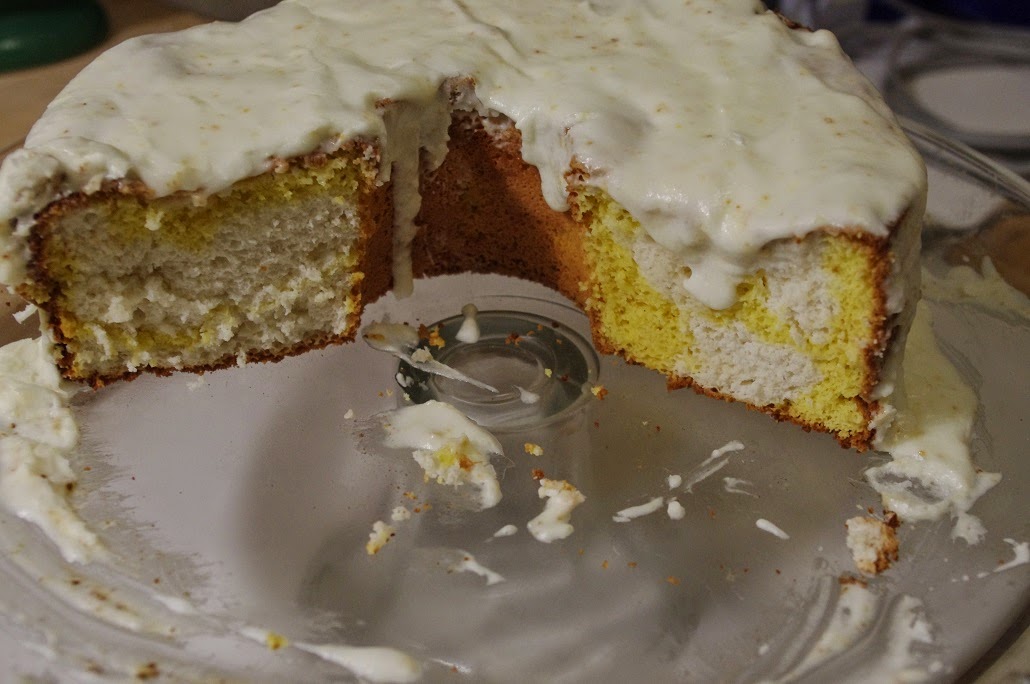 The frosting was a little runny, even after I refrigerated it, and my dearly beloved and Ryan both opined that the orange rind in the frosting was a little bitter the first night (it mellowed the second day), so take that into consideration when making this.  But overall, they loved this cake.  And while not as "fat free" as Angel Food Cake, it's still not bad for you.

So, Louise, I'm linking this recipe up with you!

Happy Wednesday, everyone!
Posted by Marjie at 1:03 PM

I like the sound of orange frosting, it's too bad the zest was too strong flavored. The cake itself looks moist and delicious!

I'm so Happy to see your Daffodil Cake!!! I remember you making one a while back and I was wishing and hoping you would bake it again and look at you, you did!!!

It looks delicious Marjie but I won't show it to Marion because she has been "bugging" me to bake another Chiffon Cake. I'm hoping the Chiffon Cake Trifle I have planned will tame her craving. If not, I may just "have" to bake her a Daffodil Cake!

I see the recipe calls for cornstarch rather than flour, very interesting:)

Thank you so much for sharing, Marjie and thanks for joining the Bake Along!

Nice to have you baking along with us :D

I love daffodil and happy that the Aussie daffodil season is arriving... Yippee!

I love the yellow and orange of your cake too. Totally agree that although chiffon cake is not fat free like angel cake, it still not bad for us too :D

I have the ingredients to make that. Too bad I didn't see it sooner. Maybe Friday night...

i tend to associate daffodil with yellow so that bits of yello coloring is definately not a problem. Glad that you found out about our bake along event via louise, we are baking twice a month , you are welcomed to join us anytime. The marble effects of the cake looks attractive too!

Hi Marjie,
Glad to see you in Bake-Along!
Daffodil Cake is such a pretty name and your cake looks very pretty with the yellow and white colours. And looks very good with the frosting!
Thank you for joining our Bake-Along. Please do join us anytime! Our next bake will be this moist delicious Chocolate Zucchini Bundt Cake, you may get the full details from either Zoe, Lena or my blog! Hope you have a lovely weekend ahead!

i'm unfamiliar with this but it's lovely! i like cakes that are better after some time in the fridge.

Hi Marjie, very beautiful daffodil cake and the frosting looks so irresistible. Thanks for sharing and regards :)