Well, last weekend we took Ryan off to Penn State.  Here are Mark and his father, preparing to unload the trunk while Ryan trotted off to collect his room key (and a free t-shirt). 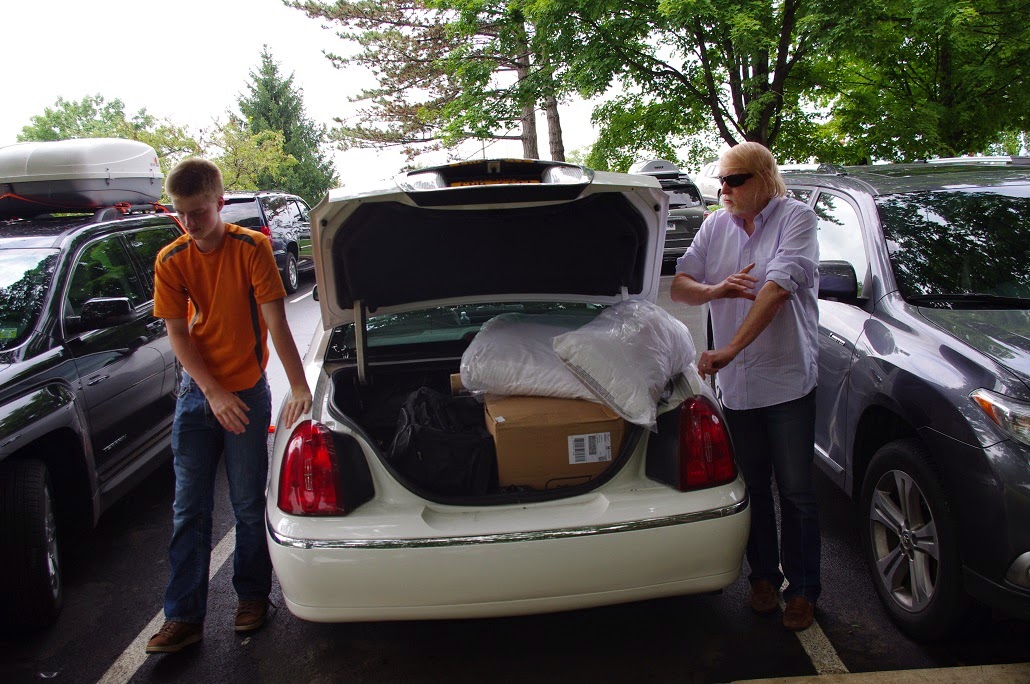 His room is a perfectly normal college room, complete with concrete block walls (they have to keep rowdy young men from kicking holes in walls somehow, plus block is pretty fireproof).  I was impressed by the amount of shelving in the room.  Here they all are, making sure the bed is adequate in size, and rumpling the bed I'd just made for him.  Gotta get to feel at home somehow! 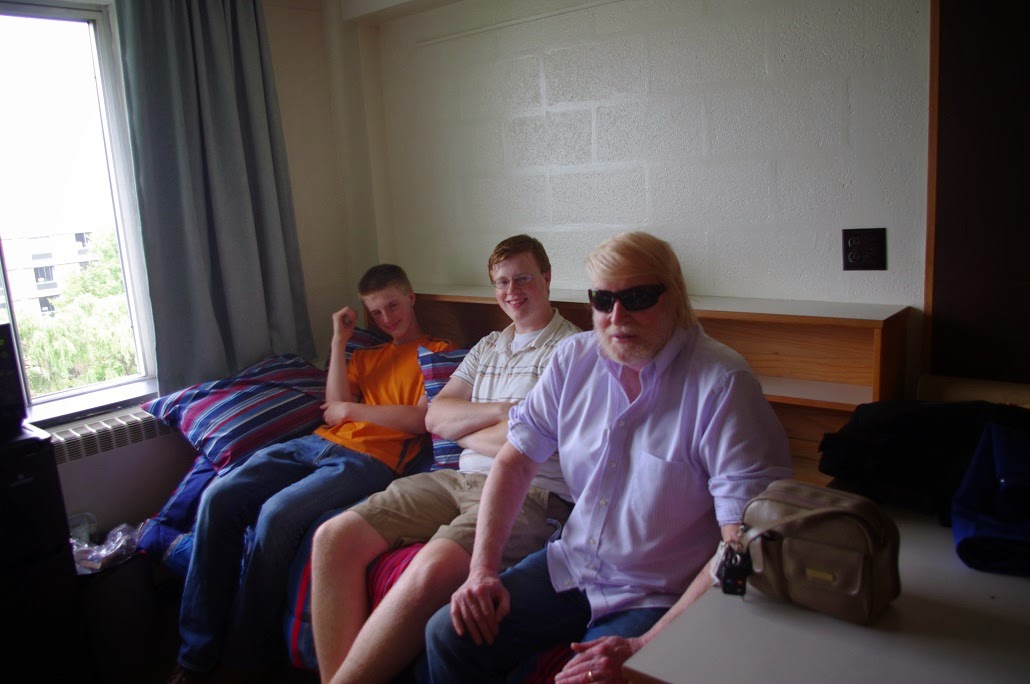 Ryan's room was not carpeted, so I ordered him an area rug from the website for the big-box store with the blue sign that's in every city.  Hey, shipping was free, and I sent him some granola bars as well, so he's a pretty happy boy.  Me, I'm adjusting to a too-empty house.

Hope you all have a wonderful weekend!
Posted by Marjie at 8:20 PM 9 comments:

For the past few weeks, I've been on a home decorating kick.  Nothing major, mind you: lampshades (they get really ugly after 25 years), blankets, new sofas for the room Dan redid last fall.  Well, when driving home from the furniture store, my dearly beloved spotted a sign for concrete statues.  So we called them.  Turns out that right here in little old Scranton, PA, there's a fourth generation caster of concrete garden statues.  Of course, we had to buy some.  His prices are insanely good: $700 for all of this:

2 lions for the front porch, with 6" high bases: 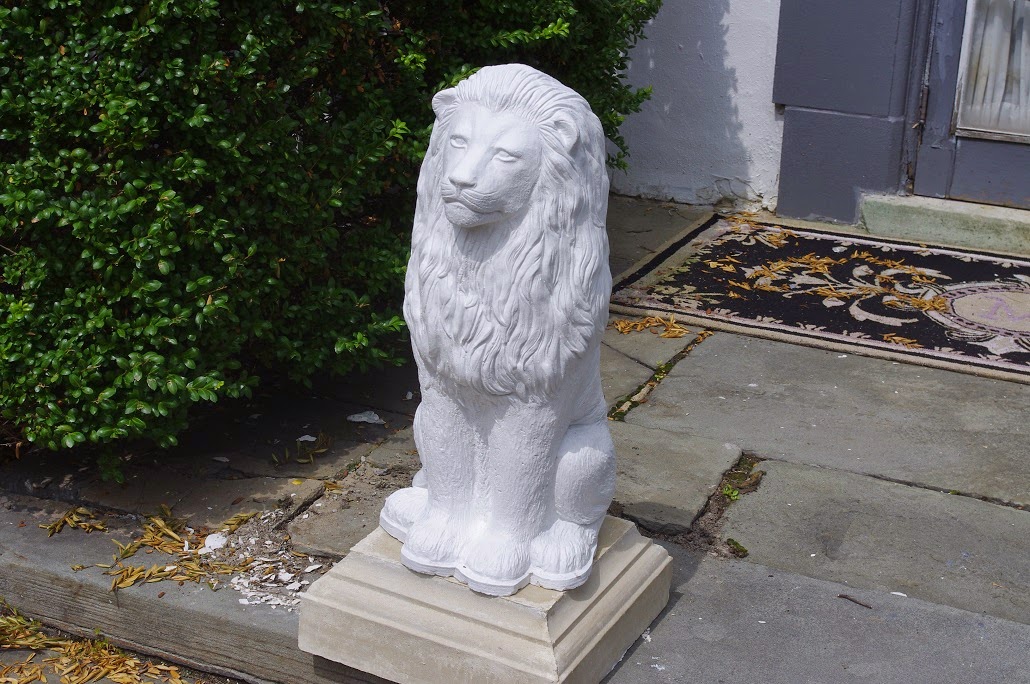 This base, pedestal and urn: 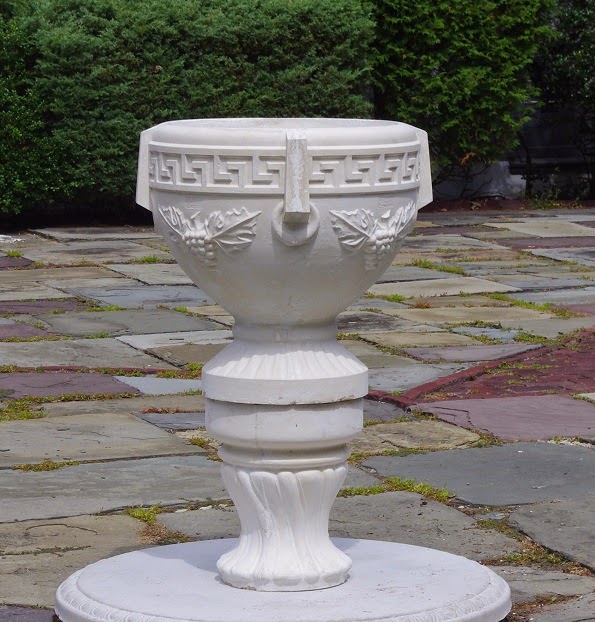 My artsy daughter was here last weekend, after we dropped off Ryan, to keep us company, and she planted Catmint, "Jeepers Creepers" and something else, the name of which escapes me. 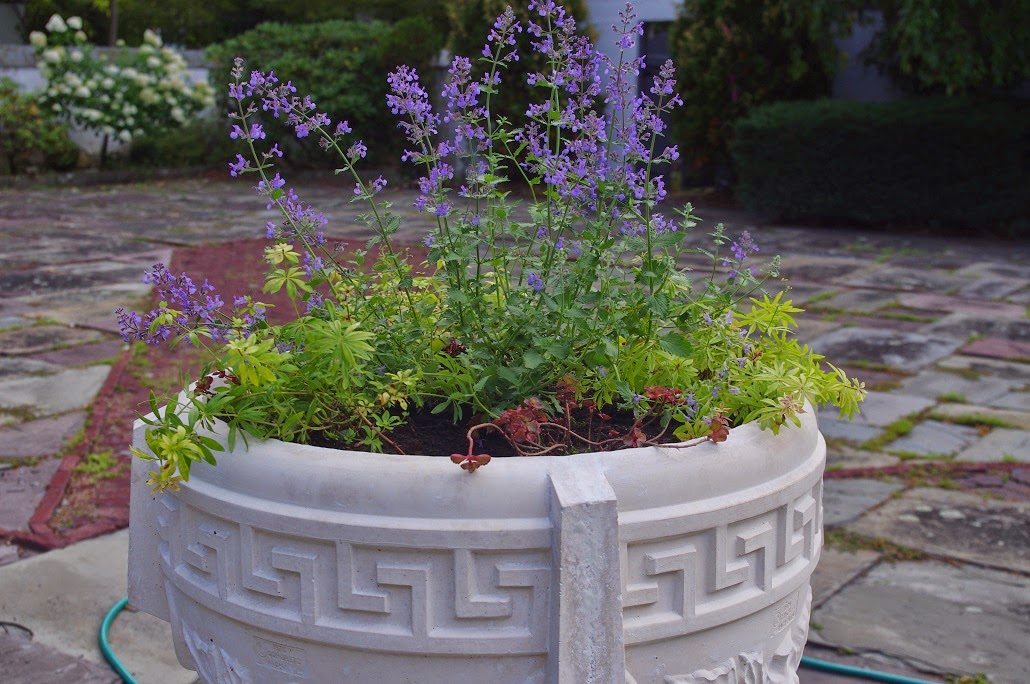 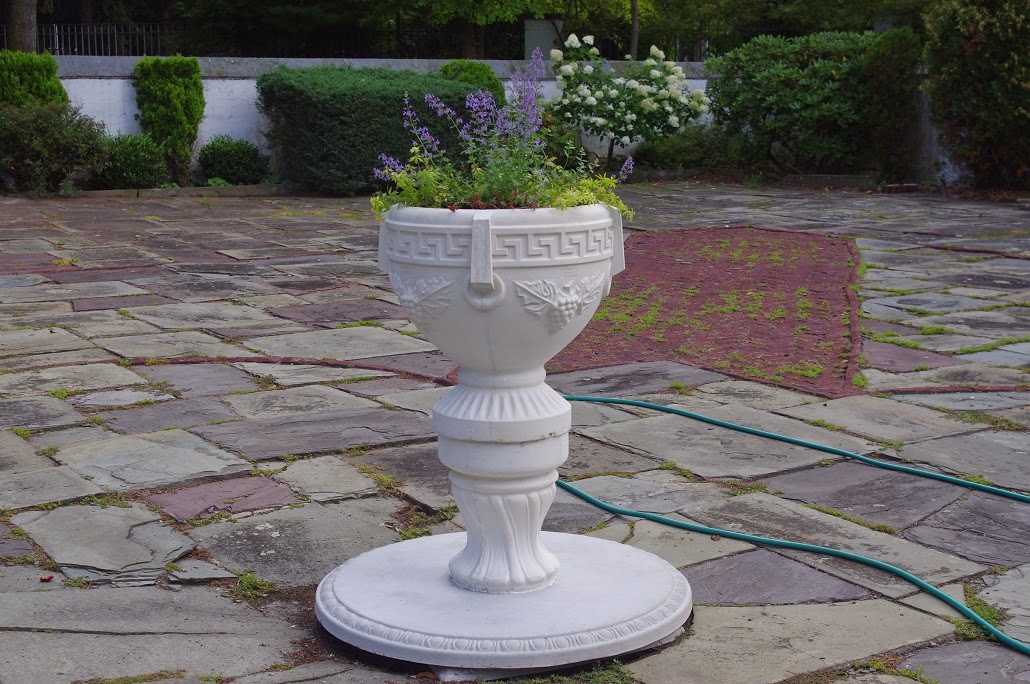 We'll check in again in a month or so to see if the plants grow or not.

Happy Garden Tuesday, everyone!
Posted by Marjie at 3:03 PM 10 comments:

Last week was very busy.  Next week will be even busier.  Ryan goes to college on Friday.  I'm rather depressed about it, truth be told; I'm going to miss the "little" weasel.  So I don't know how much I'll be posting for the next week or 2.

Last Wednesday, when I was taking Mark somewhere, we found a box that Fedex had delivered to in front of my gate.  Shoot, it's not like they don't know how to open the gate and walk through it.  It's not even like they can't see the house and know they can walk 150 feet from the gate to the front door.  It's just that the damn fool driver is lazy.  Anyway, I had Mark grab the box, tossed it into the back seat of the car, and promptly forgot about it until yesterday.  (Good thing I went out and found it; it poured much of Tuesday and Wednesday, and into Thursday morning.)  So, when I opened the box, I found this: 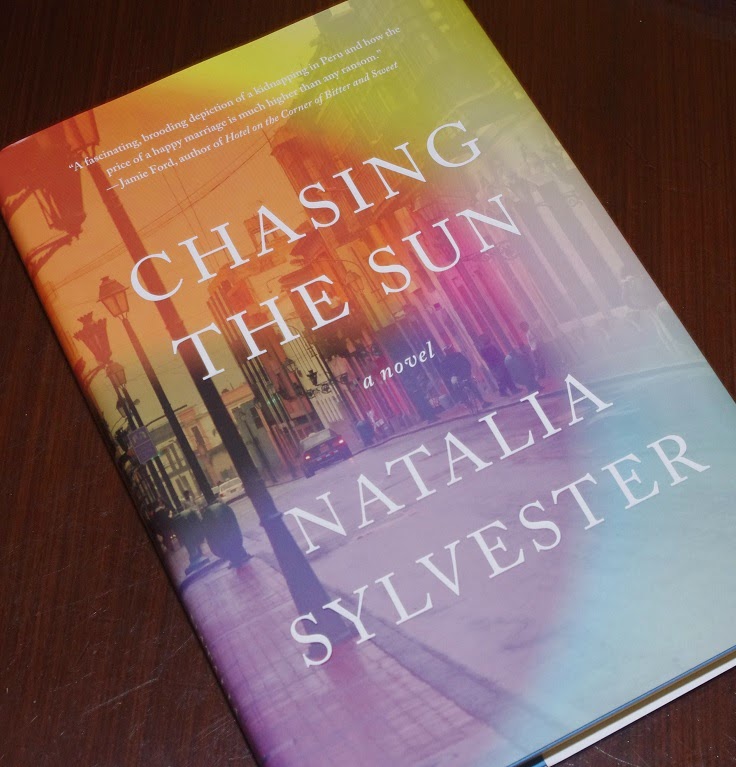 I didn't order it; there was no packing slip, no note and no return address.  So the book is of mysterious origin, but I'm looking forward to reading it.  There's nothing like a nice, new book to catch one's interest, is there?

Hope you've all had a wonderful weekend.  See you at some time!
Posted by Marjie at 9:00 PM 9 comments:

I'm pretty sure my lawn is a Chem-Green man's dream: Oh, to have to turn this into pretty grass, and charge these people out the wazoo for 10 acres of perfect grass! 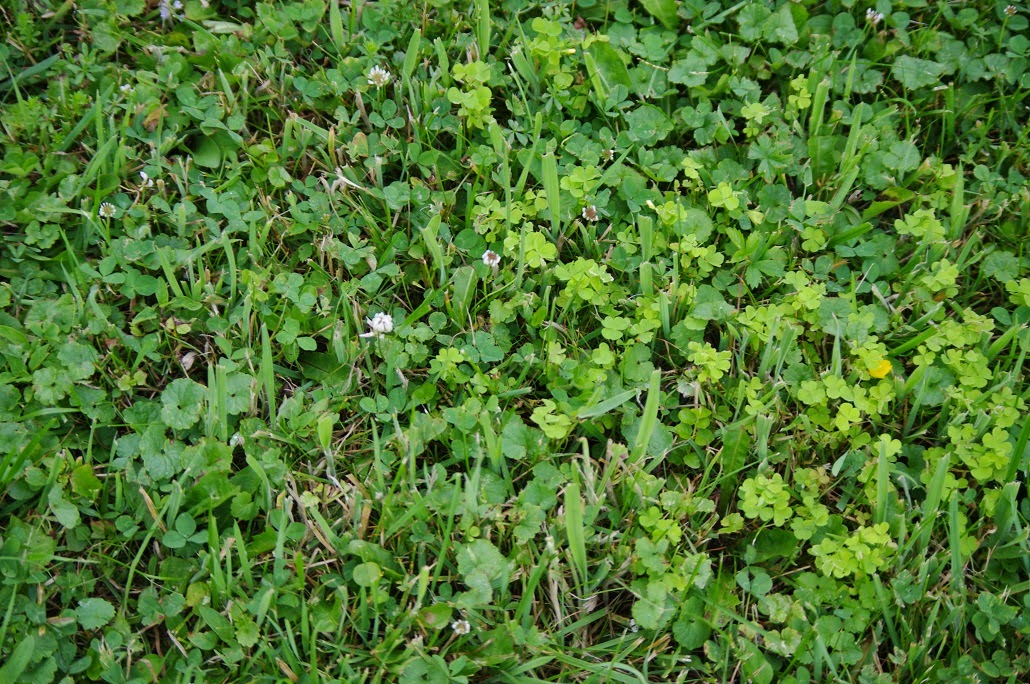 Or, we could just accept the clover and move on.  It's green, it uses different nutrients than the grass does (so never needs fertilizing), and it's actually good for some trees, again, for the nutrients.

How's your lawn looking?  It's pouring here today, so the grass is growing!

In June, we were invited to the wedding of our "junior" financial advisor (it's a father and son team).  So I've known for nearly 2 months that the wedding was to be last weekend, and thought, "Well, I've got a few dresses in my closet which will work...."  The ladies out there know what I'm talking about.

So, on Thursday night, around 11PM, I decided that since I don't know New Jersey customs, and this was to be in a Catholic church, with a country club reception, I needed something new.  Long dress or short?  I decided on one of those fancy high-low hems, cut a rough idea out of an old sheer curtain I had lying around, basted it together, pinned it to a dress that had a suitable bodice, and decided that this was what I'd wear - of course, made out of a lightweight royal blue brocade.

I spent Friday afternoon sewing, and in only about 4 hours had this: 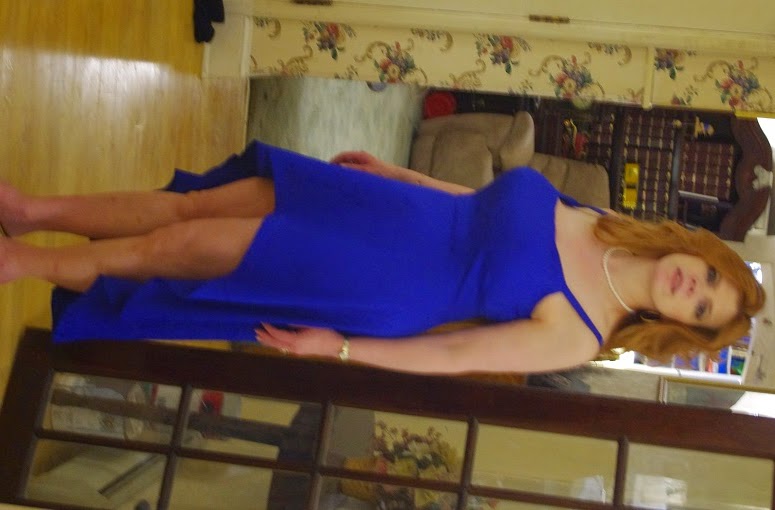 I was pretty pleased.  (Blogger won't post it vertical.  Sorry for the crik in your neck which is developing right now from looking at it.)

The wedding was the most over-the-top affair I've ever seen.  12 bridesmaids and 12 groomsmen.  Seriously, where do you find 24 people you love so dearly that they absolutely must be in your bridal party?  That doesn't count the four nieces and nephews (ages 2 to 8) of the couple, who were just adorable in their little tuxes and dresses.  The groom told us there were 270 people at the reception.  Holy cow.  I was pretty sure I saw 4 celebrities there: Dr. Melfi from the Sopranos, Gene Hackman, Kenny Rogers and Ralph Acampora. Almost all were lookalikes: Dr. Melfi lacked the annoying voice, Gene Hackman was really a financial advisor to big-time athletes, Kenny Rogers was really a CPA or lawyer or something, but we really did meet and converse with the real Ralph Acampora.  OK, that's only exciting if you're a longtime CNBC and financial news junkie, which we are.  There were several big-wigs, active and retired, from huge corporations, too, although I can't recall all the names.

The food was astonishing, too.  They had rented a room at a boat club for the 2 hours between wedding and reception; libations and snacks were liberally available.  The reception was at a country club overlooking a huge river in New Jersey - about a mile wide at that point.  For the first hour, there were hors d'oeuvres on the patio - mini quiches, mini pigs in blankets, bacon wrapped scallops, coconut shrimp, beef crostini, beef something else, crab claws, shrimp, fruits....a full meal right there.  And then this was the dinner menu:

Anyone who left hungry had only himself to blame.

The big downside to the day was the freakin' eastern New Jersey traffic.  The d**n Garden State Parkway sometimes moved as fast as 30 MPH; the net effect was that it took me an hour to drive 17 miles at 1PM.  Delightful.  I swear I'll never drive in eastern New Jersey again unless it's between midnight and 5AM!

So, I hope you all had a more relaxing weekend than mine.  Happy Monday, everyone!
Posted by Marjie at 5:15 PM 9 comments:

I know it's Thorsday, and I'm supposed to do a Thorsday Book Review.  But the book I've been reading is nonfiction, complex, and making me think.  That hurts my pea sized brain, and I can't remember some other book to review, although I've read plenty.  So let's go with the chicken I made the other night - easy peasy.  It was inspired by the always-dependable red plaid cookbook.

In the bottom of your broiler pan, whisk together the vinegar, wine, onion powder, Italian seasoning and, if desired, salt.  Add the vegetable oil and whisk until combined, then dunk the chicken, turning so both sides are coated.  Cover with plastic wrap and refrigerate for as long as you'd like before dinner (I think I had about 45 minutes), turning every so often so both sides marinate.  Preheat the broiler, then broil, skin side down, for 15 to 20 minutes.  Turn over and broil skin side up for an additional 10 to 15 minutes.  Test to be sure the chicken is cooked; if it isn't, cook a little longer. 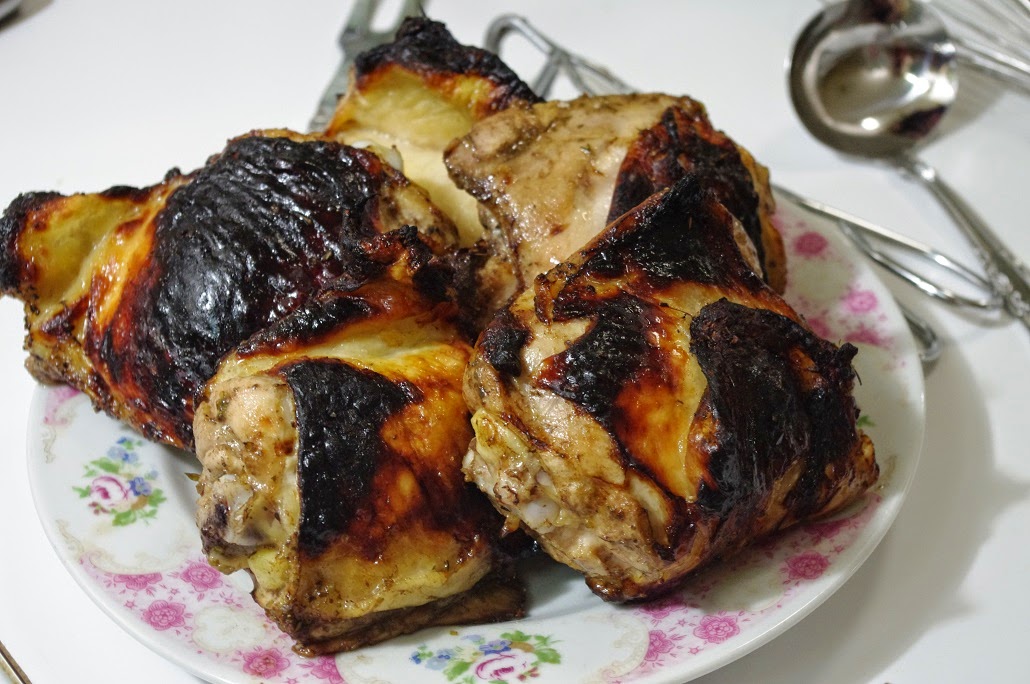 If you are or reside with a gravy-a-holic, remove the chicken to a plate and cover to keep warm.  Pour the fat off the broiler pan, add the cup of water and chicken base and heat to a simmer.  Whisk the 1/4 cup cold water with cornstarch, whisk into the pan drippings, and cook until thickened.  Return the chicken to the pan and return it to the oven for a few minutes to be sure it's hot.  Serve with rice and whatever green veggies you have handy (I used broccoli and spinach). 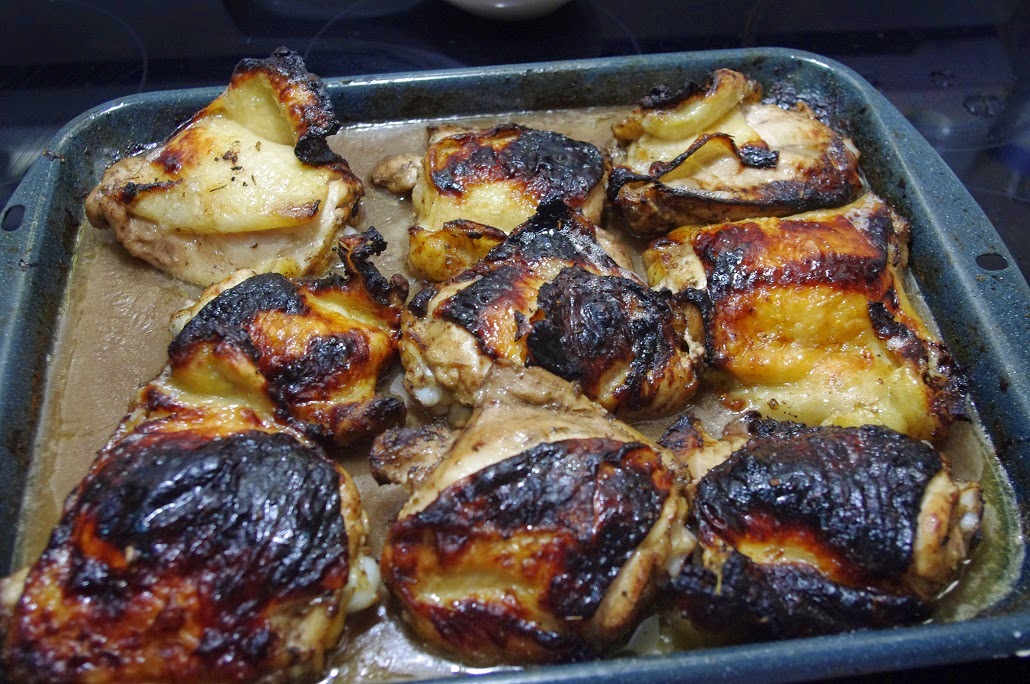 This turned out well, and it was pretty fast and easy.  It was a cool evening, so I didn't mind heating up the oven, but otherwise, you might want to wait until fall to make this.

Some of you will remember my daughter planting a hydrangea in my courtyard a couple of years back.  And by "planting", I'm sure you remember her directing her brothers to dig a hole and move the plant from her car to said hole.  That's a good way to plant, in my book.  It's occurred more than once around here. 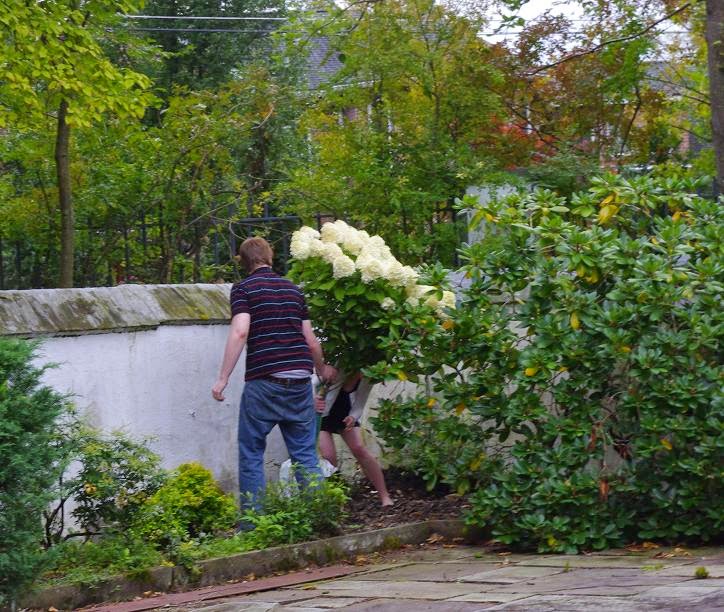 Well, said hydrangea is growing nicely, and has bloomed in the past week! 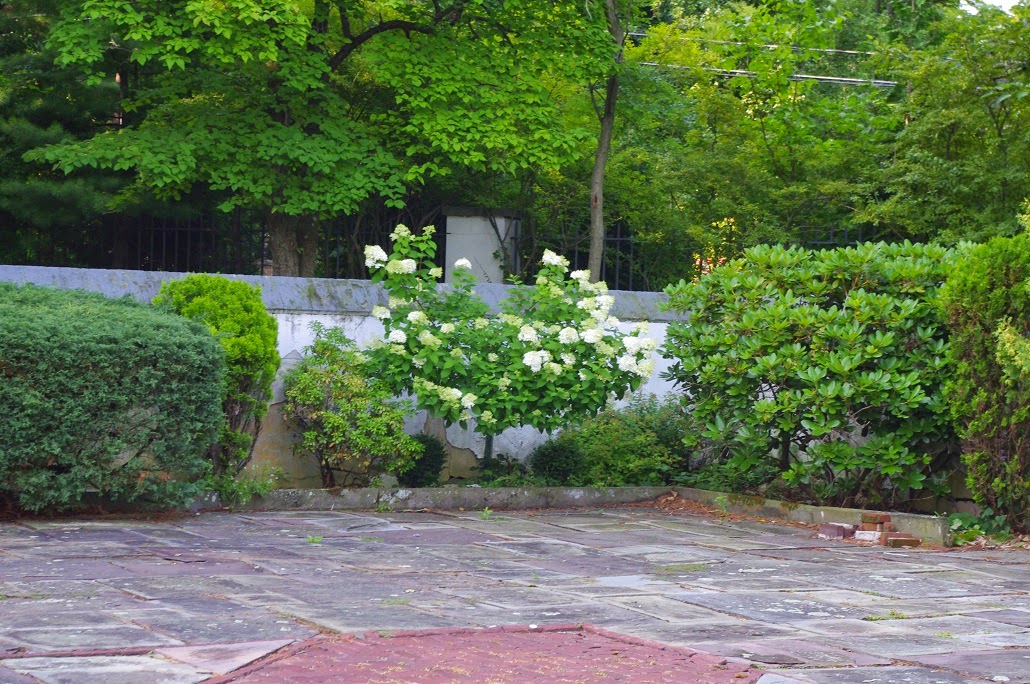 The old hydrangea which was large when we got here, and so must be at least 30 years old, is a little slower.  No matter; it will catch up soon. 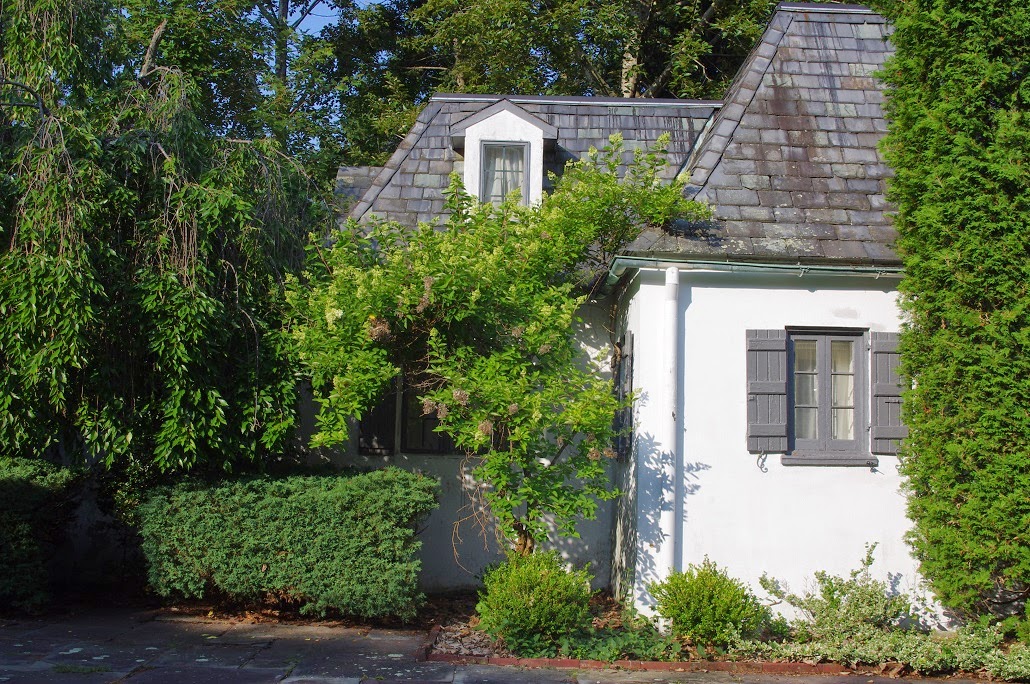 Happy Garden Tuesday, everyone!
Posted by Marjie at 3:31 PM 9 comments:

Fish is an easy dinner.  I typically serve it on Monday (sometimes other days as well), so I don't start the week feeling weighed down by cooking.  I stumbled upon this idea a couple of weeks ago, and it has been a big hit.

Have you ever seen this product?  I ordered it online, and can assure you that much more will be coming to my house.  It's great in this recipe. 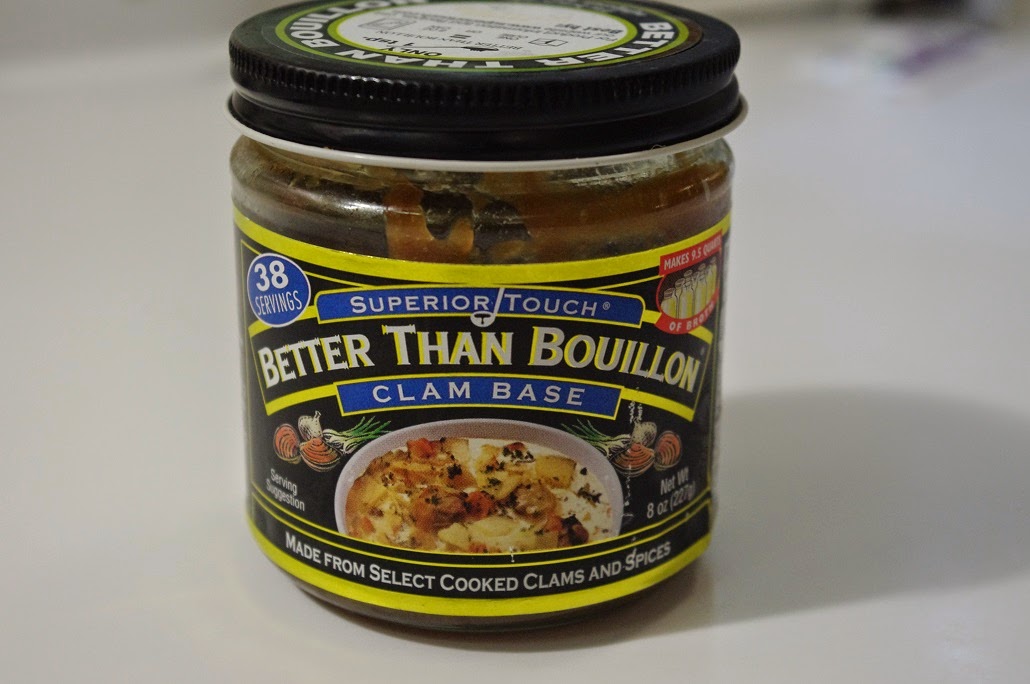 Spray a skillet, melt the butter over medium high heat and place the tilapia in the melted butter.  Sprinkle generous amounts of lemon pepper over the fish (no salt, because lemon pepper contains salt), and cover to cook for a couple of minutes, until the edges of the fish are white.  Flip the fish, sprinkle with lemon pepper again, cover and cook until done.  Remove to a plate and place the pan lid over the fish to keep it warm.

Add 1 cup water to the skillet and stir to loosen any fish stuck to the bottom of the pan.  Stir in the clam base, and heat to a simmer.  Whisk the cornstarch into the cold water, then whisk it into the pan; cook, stirring constantly, until it thickens.  Return the fish to the pan, heat through, and serve over rice. 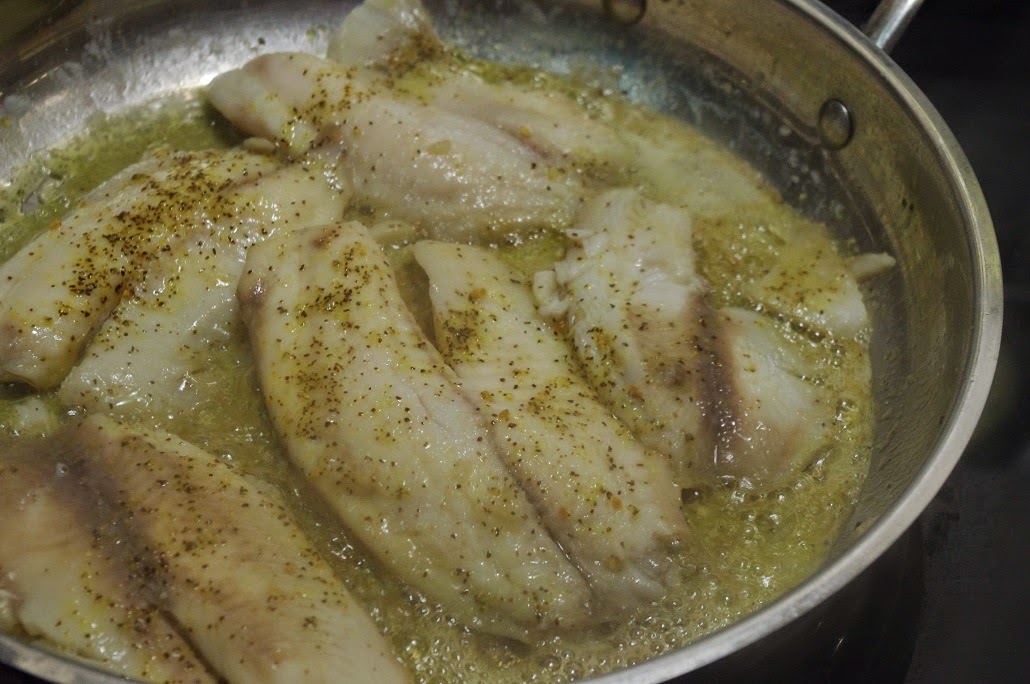 Have a great weekend, everyone!
Posted by Marjie at 1:32 PM 11 comments: