This was a Christmas story, written by my friend Miranda, and sent to me for Christmas.  I've read basically nothing since the week before Thanksgiving - really, I started a book on November 20, and finished it after Christmas.  So it was nice to get a new book, and have something fun to read! 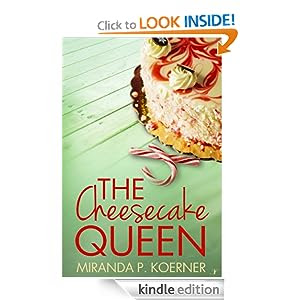 THE CHEESECAKE QUEEN
by Miranda Koerner

Caeleah is a journalist, a food writer, who was recently let go from her job, and has been flying about interviewing for other jobs.  So just before Christmas, sitting in an airport waiting for a flight back to Chicago after another fruitless interview, she encounters a nice old lady who strikes up a conversation with her.  Distressed about Caeleah's sadness, the old lady, whose name neither Caeleah nor we learn, offers to swap air travel plans with Caeleah, and puts her on a private plane to Chestnut, Colorado.  There, Caeleah is told, she will find the best cheesecake anywhere, and write a story about it, which will land her a fabulous job.  Sure enough, when Caeleah arrives in Colorado, a cabbie named John takes her to the bakery of Cinnamon Sugar, who is a person, not a spice combination.  Cinnamon, and her sisters Ginger and Nutmeg, run cheesecake, pie and cupcake bakeries in this town.  Not just any bakeries, mind you, but magical bakeries, where everyone has their goods every day, and no one gets fat; indeed, people lose weight eating Cinnamon Sugar's cheesecake.  (as an aside, why can't I find such a bakery? I digress.)  The mayor of this town, Watson, is a health food nut even more overbearing than Mayor Bloomberg - he wants to ban all flour, sugar and baked goods from the town!  Caeleah takes it upon herself to (a) discover the secret of the cheesecake, thus winning a great job, and (b) stop Mayor Watson from ruining the town's bakeries.  It's an easy, fun read.  Chick-lit at its finest, this is supposed to be a Christmas story, but it's really just a nice winter tale.  5/5

Happy New Year, everyone!
Posted by Marjie at 10:27 PM

I definitely want to read this!

Oh this looks fun! I want to read it. g