Larry asked which people in this crowd belong to me. Here's the ID for everyone; click on the picture to biggify, after you've memorized the people. 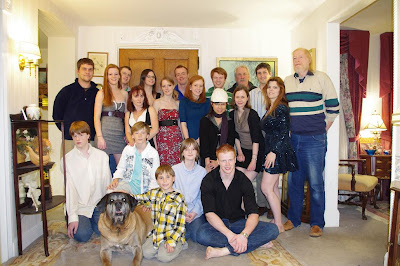 Standing: Younger son of our friend Greg, my 3rd daughter, my 3rd son, (forward) the Colorado mom, my second daughter (brunette), my oldest daughter (blond, child #4), my second son, oldest son's girlfriend (also a redhead), oldest son behind visitor from China, Greg behind his daughter in law, Greg's oldest son, me and my dearly beloved.

On the floor: Ryan, my 5th son (and 8th child), the two little boys from Colorado, Thor (everyone really comes to visit Thor, let's be honest here), Mark, my youngest, and my 4th son, Jeff.

Don't worry, there won't be a pop quiz later.

Now, on to Mango's favorite topic, the food: 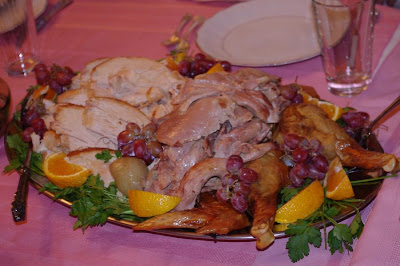 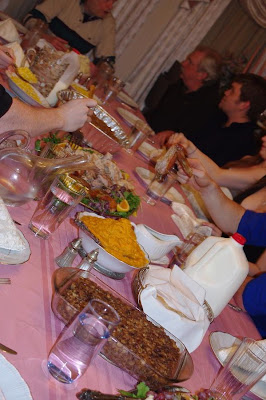 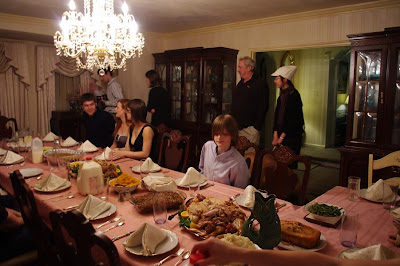 We have here the orange and green cake, lemon meringue pie, chocolate cream pie, pumpkin pie, crumb topped apple pie and blueberry angel torte. There were duplicates of some of these pies. However, the second apple pie didn't survive. Some dumb*** had it sitting on the stove to cool, when she turned on the wrong burner and the pie plate exploded. I won't say who the dumb*** was, but her initials are mine. 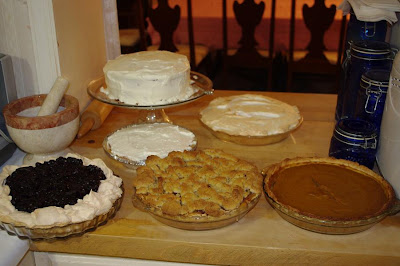 Look at my daughters! You can tell that dessert is their favorite thing, too! 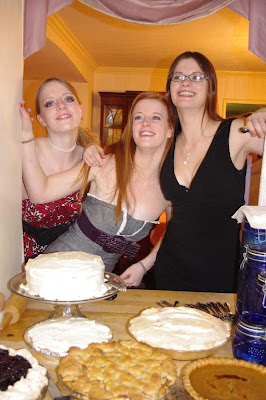 LOL... My ex exploded a Spode Christmas plate on a burner once... I hope your pie plate didn't turn to sharp shards of nearly poweder as that did!

Love that last photo. Beautiful girls - and the one in the center must give us a good idea of what you looked like when you were in college - a couple of years ago! ;)

That was most helpful. Goodness, the Mr. looks kind of big compared to, well, everybody else! He is a mastiff sized human! The foodables appear fantastic. Yes, much more nommy than what I had for sure.

Thor, you are one lucky dude. Hey, just wonderin' what's up with all the bare nekked feet. Must be pretty warm at your place, huh.

Thanks much for the ID's and it's a great looking crowd. Great that you can all get together and even better if you always can. Our kids have often been spread around the world.

What fun it must be when you all get together and what a lot of dishes must need to be washed.

I really want to come spend the holidays at your house. I'll bring a pie.

I once made chicken and as soon as I took it out of the Pyrex, the dish exploded all over the counter. Scared me for life!

It's a good thing that there's not going to be a pop-quiz! I was lost even "with" the names...lol!

Your meal... your table... your family and friends... It all looks fantastic, and I'm glad that you had a Happy Thanksgiving! Well... except for the pie plate, that is!!

Now, I've only got one question. Is there any dessert left? ;)

I love that you had all of the kids home for Thanksgiving - what a beautiful family you have Marjie. The food and table look amazing.

Hey, if I came for a visit, do you think I could get lost in the crowd and just eat the food and no one would even notice!

What a splendid gathering. It looks like it was a terrific Thanksgiving at your house. Glad to see I'm not the only one who makes mistakes in the kitchen!

Looks like an absolutely wonderful time was had by all!

Your daughters look just like you - and none of you look like you ever have a single bit of dessert!

I exploded a glass pyrex once making gravy in it. Dinner was cold when we finally stopped cleaning to eat - pretty sure it was Easter. g

The turkey looks delicious, by the way, so juicy. And I didn't realize that Thor (or your DB) were so big! What a lot of cooking. I'm sure you had lots of help.

Of all the labels, I think there's only one that stumped me -- gave me paws, as it were.

Looks like everyone had a good time-and was fed very well!

your daughters may look like they like dessert, but they don't look like they actually eat it!! those slim line figures! :o) y'all look absolutely great, and so does the food...

I love your annual photo! How cool that one of your guests just happens to be an accomplished pianist. Scary about the exploding dish; hope you didn't get hurt. Bummer about losing that pie. Glad you had a houseful. Oh, and I love how you told us who was who in the photo! :)

Looks like you had a lovely family gathering. Our Christmases are like that with our brother & sisters, their children and their children too. We've gone full circle to having nearly all grown ups then back to lots of littlies which is really nice.