So, I mentioned that Patrick came home for an extended time; he and Thatcher drove from Arizona (and hopefully won't ever go back).  So, this is Thatcher.  He's a cute little guy. 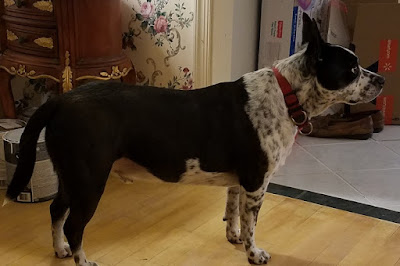 He likes children and larger humans, too. 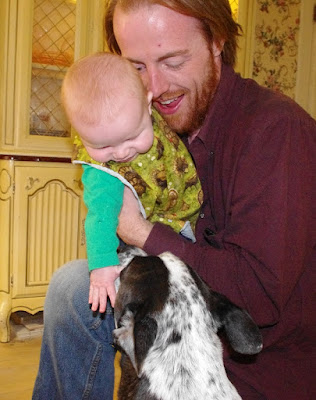 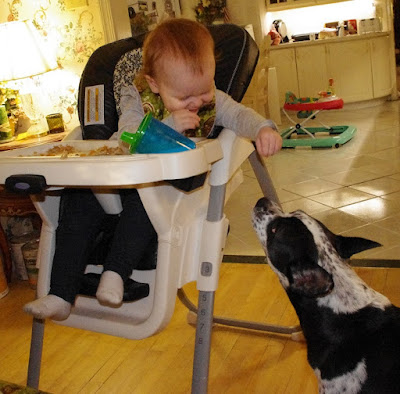 He would not jump up to take the specks of food Maddie was trying to share; she had to drop them on the floor for him.  I thought that was really polite of him.

The only problem with Thatcher is that he doesn't like other dogs.  Hence, we had him muzzled for Thanksgiving weekend.  It made me sad. 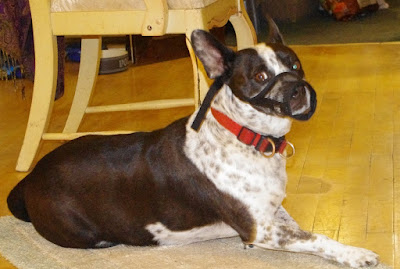 Anyone have any suggestions as to how we can get Thatcher to be nicer to dogs?  He was growling at Tank, which hurt poor Tank's feelings.  By and large he ignored Bebop, maybe because Bebop had a hurt leg and was just laying around or hobbling when he was up.  It's a shame, because he could have lots of friends.  And since I expect people with dogs to start arriving on Thursday the 21st (only 10 days, folks; time to get that Christmas organization into high gear), it's going to be a problem.

Anyway, I just wanted everyone to meet Thatcher!  Happy Monday!
Posted by Marjie at 1:02 PM

Thatcher is very handsome. Otto doesn't like other dogs until he meets them, then he becomes besties. Often it's fear, not aggression....

Oh Thatcher! What a sweet and polite boy with the babies and so handsome too. I am so sad he gets aggressive around other dogs. I wish I had some tips for you to help.

Welcome Thatcher. Some dogs just can't get along and have to be handled differently for everyone's welfare. Syd gets too stressed around other dogs and sometimes has to be muzzled. I don't like it but it's safer for Syd and the others.