Jeff went off to Joann's and bought a few pieces of fabric that he could ostensibly fold for festive bandanas for Tank, but then suckered me into sewing them.

First up: I made all the dogs bow ties from a piece of flannel Jeff bought that was just 1/3 yard.  I attached plastic snaps to hold them on their collars, and everyone was instantly festive. 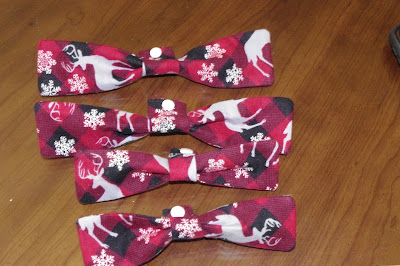 Just look how festive Tank is with his bow tie and jingle bells! 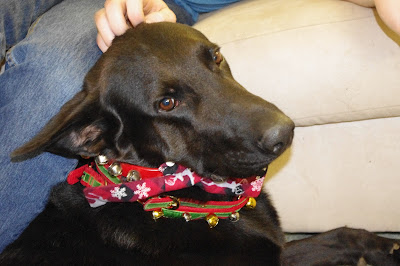 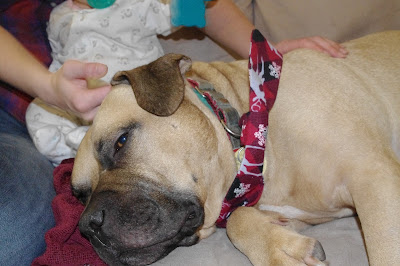 At a later point (like last weekend), I made bibs for Nora and Little V.  I will wrap them for Tank to give to his human cousins. 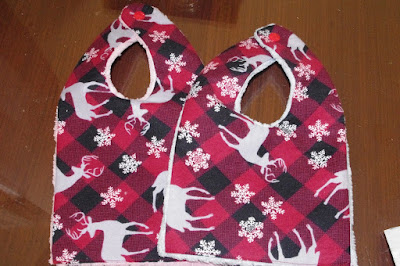 Jeff bought this stripe for his girlfriend's dog, but he didn't like it, so no stripe for Tank.  Quincy didn't care - something about dogs being colorblind - and he was happy being elevated above the crowd. 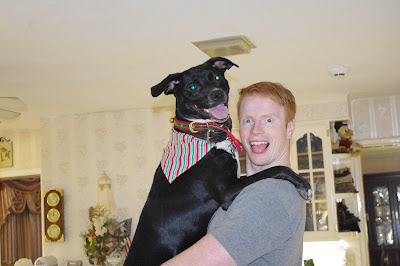 Bebop models the turkey bandana.  Only he and Tank got these. 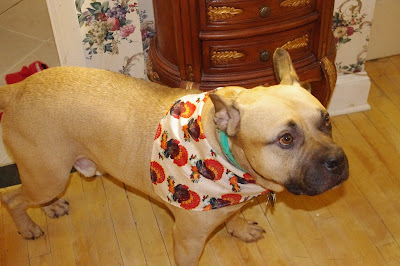 Just finished, and ready to send to Jeff: Merry Christmas and Santa Dog bandanas.  These are relatively small, because I put snaps on the turkey bandanas since that was all the fabric there was, and Jeff liked that a lot better than tying them and giving his dog tails to drool water all over. 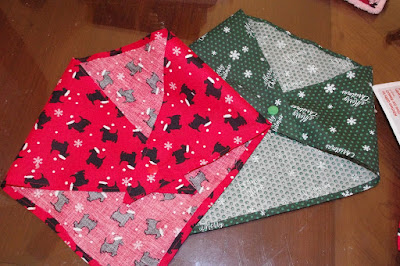 I made 5 of each of these, so Jeff can share them with all of the family dogs.  Lily got a Merry Christmas rosette, with jingle bell hidden inside.  I don't think it came out very well, but for my first attempt to make a fabric flower, it isn't awful.  I might take it apart and remake it, though. 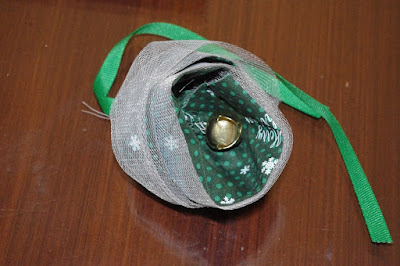 So....dog sewing.  Silly, but easy and kind of amusing.

Happy Tuesday, everyone!
Posted by Marjie at 12:03 PM

Very nice - I believe the dogs should look festive as well as us.

Now, I'm going to have to do some dog sewing for my granddogs!

Best mom, grandma, and dog grandma ever. So cute!

Wow, we like the bandanas and ties. How festive everyone will look.