Thanksgiving Week Food, and the Meaning of Home

Because I'm just too lazy to type it, here's what's on the menu for Thanksgiving. 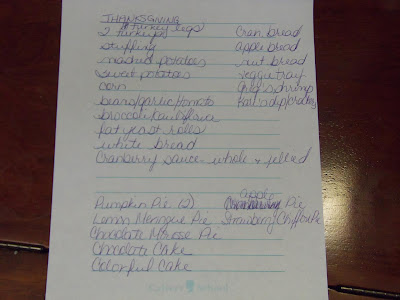 (click to biggify the lists, if you really want to read them).

As you can see, the planned Cranberry Pie became an Apple Pie (or, probably 2).  The recipe I tried this weekend didn't work out.  I'll try it again in a week or 3, adjust the sugar by a huge proportion, and then report it to you.  No sense wasting everyone's time during holiday preparations.

And here's what we're eating the rest of the week.  I don't go off the schedule here, because I'd then have to crawl under the table and hide, being unable to regain my bearings. 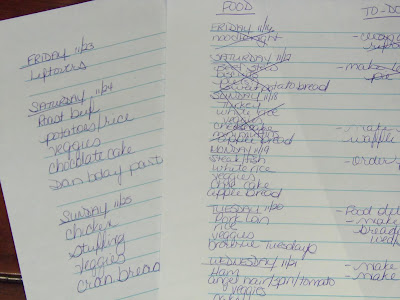 And, in case you wonder, here's the list of what the restaurant supply house will be bringing.  No frozen veggies this time; I just can't deal with them. 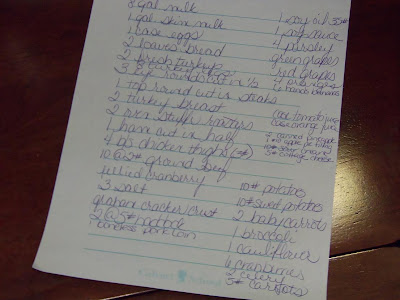 The Wall Street Journal reviewed a new book called The Meaning of Home this weekend.  In her opening paragraph, reviewer Elizabeth Lowry said, in part, "The idea of a house probably began with the roof...The medieval invention of the chimney, which replaced the simple oculus, or hole in the roof, that previously served to vent smoke from the domestic hearth, was arguably the next most important architectural innovation, followed closely  by the precursor of the modern floor...."

My parents moved a lot.  An absurdly large number of times, truth be told, for no reason.  So the only place I can consider "home" is this house.  And I want my children to forever think of this big white house when they speak of "home".  That's part of what Thanksgiving is all about: home, family, friends and food.

And, to answer Karin's question, I'm probably feeding 16 for Thanksgiving, although that could go as high as 19.  That's not too bad, by my standards.

And the Apple Sack Pie was from The United States of Pie Book, an omission pointed out by Karin.

So, tell me, what do you think of when you say "Home"?  And what does Thanksgiving mean to you?  My very best Thanksgiving wishes to all of you, even if I don't get back here for a week. 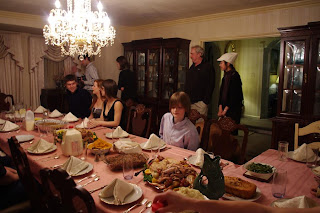 Home is a generalized area... here. I spent the first 11 years of my life roughly 10 miles from here, but the Knight grew up right around the corner from our house.

Happy Thanksgiving to you and yours!

I lived in the same house my whole life until I went to college. Since I met Ben at college, I still think of Baylor as home. I loved it. I'd move back in a heartbeat.

We think you have the best Thanksgiving ever
Benny & Lily

I found the lists interesting and I love your hand writing. Your table spread looks fantastic - what a great Momma and cook you are to feed your big family such beautiful food.

Home is when my girls come home for weekends, I feel complete then. The University year is over for my youngest daughter (first year of Nursing out of the way) and my eldest daughter gets 2 weeks off over Christmas and New Year so that will be nice to have her home.

Happy Thanksgiving to you all,

I swear - I love it and wish I could live there this week!

Home is where my family is. I think the structure makes you feel comfortable, but the people make you feel secure, warm and loved. If that makes any sense at all.

Our thanksgiving will be very low key this year - just 3 of us. JB is going to smoke a turkey breast, and I'll do the rest. I'm going to try a cranberry upside down cake - but we know how my baking ends up, so maybe I'll just spend the baking time making a new dress. g

I lived in the same house til I moved to Montreal and then went back to it every visit til Mom & Dad sold it almost 6 years ago. The house is gone now but the word 'home' brings up that picture in my head.

I have my own home now and really it's wherever my loved ones are, family and friends!

Like you, I grew up with home-envy. What a nice gift you've given your kids. And yourself. Happy Thanksgiving.

Have a wonderful Thanksgiving!!!

Hi Marjie, home for me as a child was wherever my mum and dad were. Always felt loved and secure wherever we were living. These days, home is when all the kids are here together whether we're celebrating something or just catching up. I just love the family being together and enjoying each other's company. I certainly miss having my mum and dad now and Christmas won't be the same again. I miss them terribly.
No worries, and love, Carol

Home for me is my home right now. We have spent the past 5 holidays though visiting my husband's family, so home for holidays doesn't really feel the same to me right now.

Our house in France is what I call home. I moved too many times as a child, and far too many as a younger adult for anything to be home. My heart is here in France so this is definitely my home.
Wish I could join you for thanksgiving, I am the last member of my direct family so it would so nice to celebrate something like thanksgiving or Christmas with a large family. I can dream....
Take care and enjoy your celebrations. Diane

You have beautiful handwriting Marjie! I can only imagine how wonderful your house smells on Thanksgiving day.

Home is being with my family and close friends (who are like family).

Hi from Oregon. :) I was looking for a pumpkin pie recipe and came by your blog. We have 10 kids and homeschool too. And we used to have a mastiff, but she has gone on, dear soul.

I hope you had a good Thanksgiving! Next year, we'll just come to your house, if you'll have us.

I hope you had a wonderful Thanksgiving!