I haven't been out of the house in about 8 weeks, so sometimes it's hard to remember to eat an actual meal instead of just picking at something, or even having a cup of hot tea to get through to "later".  Whenever "later" might be.  Because, you know, what day is it?  "Day."

Meanwhile, Patrick is finishing his last semester of his senior year of his accounting degree online, and cursing roundly about it.  But at least his having to do zoom classes a couple of times per week defines Wednesdays and...which other day was it again?

So, a couple of days back, I decided to make myself a better than average salad.  I took some spring mix, chopped up an apple, cucumber, mozzarella, a touch of leftover steak, and walnuts, and added balsamic vinaigrette.  It was inspired by a salad I had at Panera (which had chicken involved, so the connection is shaky, at best). 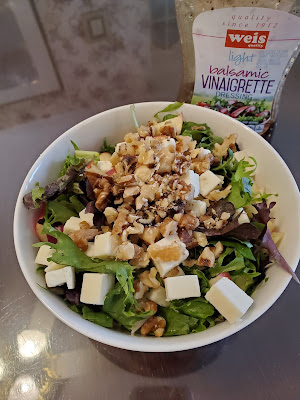 One of these days I'll be inspired to post and actual recipe.  Meanwhile, on my sewing blog, I just posted pictures of the dresses I made for myself and my beautiful granddaughters for Christmas.  Nothing like getting pictures out there on time, right?

Happy Wednesday (I'm pretty sure), everyone!
Posted by Marjie at 6:48 PM

Email ThisBlogThis!Share to TwitterShare to FacebookShare to Pinterest
Labels: salad

Hard to beat a good salad especially when it contains nuts.

Yum! I love every ingredient on that salad. I was just asking Chad what day it is... crazy times we are living in.

That sounds like our kind of salad, delicious. Stay safe and have a good weekend, Diane

It looks good. Meals have been strange here lately. Sometimes I cook and sometimes it's every man for himself.

it's so hard to keep track of the days! i like your idea of a salad, for sure!