Dan came home for 10 days during vacation, and Jeff came up to visit.  He had a foster dog in tow.  I took one look at this face, and said, "That's not a dog; he's a puppy."

So, this is Quincy, the foster.  He was rescued from North Philly, and declared "dangerous" because he guarded his food.  (More on that later.) 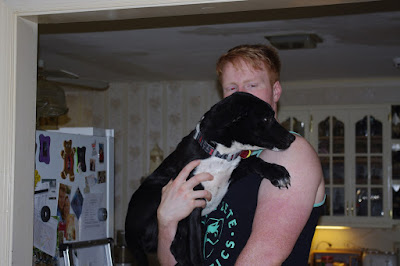 It looks like this is the first time Quincy has seen acres of grass where he can romp and play.  He gave Tank a run for his money, but Tank was very gentle with the little guy. 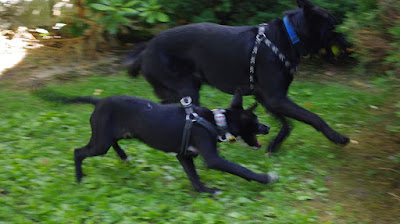 Of course, Quincy immediately determined that the Great Red Protector is the guy to sit near, because he is a sucker and shares his food. 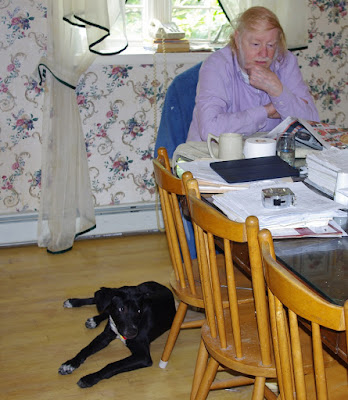 Jeff went off on an adventure at one point, and left Quincy and Tank to wait with Ryan, who was working in the porch. Quincy stayed within 10 feet of Ryan, making a nest out of a couple of tarps on the porch. Jeff's dogs don't stray when they know that their person is missing. 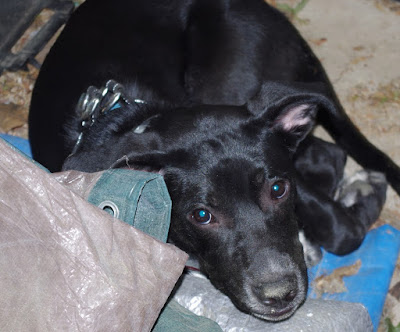 This is where Jeff went: He and Dan determined that we should have a picnic table.  So, we now have one.  It was a good place to play a board game while surrounded by romping and playing dogs. 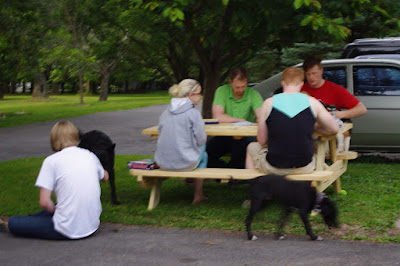 As for Quincy guarding his food?  Well, Jeff had been fostering him 2 days by the time they arrived, and he already had Quincy trained to sit in a line and wait for treats.  Jeff has a similar act for when he's preparing doggy dinners; they all sit and wait.  What you can't see in the pictures is that Lilly (a.k.a. Adventure Beagle) dances with her front legs every time there's any food to be had.  It's a funny act. 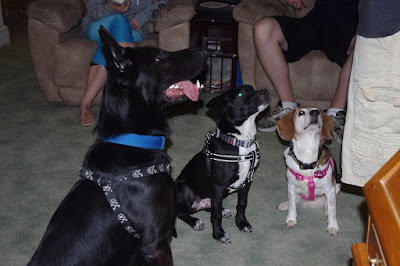 And, by the end of the weekend, Jeff had decided that Quincy is a great little brother for Tank, so after 4 days with Jeff and Mara as fosters, Quincy found his forever home with them.

Hope you all had a great holiday weekend, too!  Happy Monday!

Someone sure has the dogs attention in the last shot.

BOL, as soon as I saw that first pic I thought to myself "this one's gonna be a failed foster" and I guess I was right! Yay and congrats to all!

What a sweet puppy! We're so very happy that he found a great forever home. That makes our day.

Oh, I'm so glad they are keeping him!!

I was hoping he would decide to keep him! Yay!!

We were in Vegas for the 4th and flew back home on the 5th. We had a great months holiday which I will eventually catch up with!! Today is Bastille Day here in France so we have more celebrations here tonight. Happy dogs by the look of it :-)) Diane