You probably know that I don't buy many new cookbooks; the vast majority of mine were purchased from used book sales, although I have bought maybe 8 new ones over the past 35+ years.

You might also remember that a couple of years back I bought two low cholesterol cookbooks at a used book sale; one of them was put out by the American Heart Association.  But since it was written in 1989, it was before the invention of "trans fats".  So I decided to spring for another.

I didn't want the Kindle version for $9, nor the paperback for $13.  I went all out and bought the hard covered book for $26.  If I'm going to use it much, the paperback will have a hard time surviving 5 years, and I find it hard to just flip through e-books and read them, especially cookbooks, where I want to flip back and forth.  Just give me a real book and a pad of post-its, thank you. 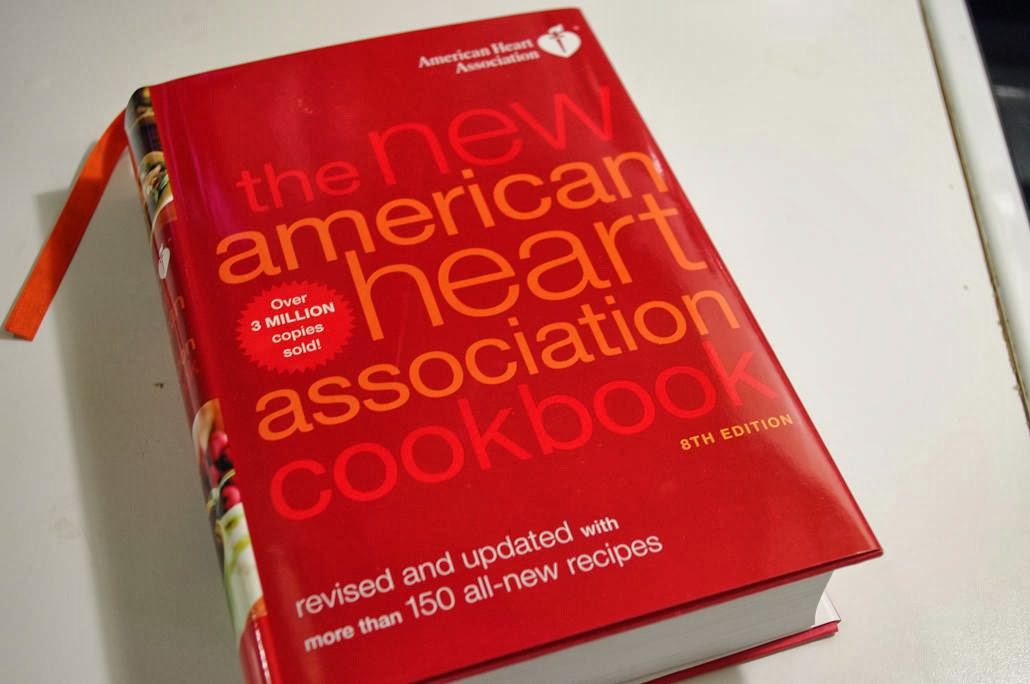 So I got this last Wednesday, and spent about 6 hours reading it.  Don't worry; I remembered to feed the family.  They would have gotten very noisy and reminded me that they were hungry if I had forgotten.  You've seen them; do they look quiet and timid to you?  Anyway...

This is a huge cookbook, at around 700 pages.  Maybe 450 to 500 pages are recipes, and the rest is verbiage about healthy eating and so forth.  It's nearly twice the size of the earlier version which I have, with many more recipes, but it does lack some very vital information which was in the earlier version, such as how saturated fats translate into cholesterol in the body, and recipes for things like lowfat mayonnaise, and how to replace staples of life with healthier alternatives.  This book, instead of telling you that you can beat nonfat evaporated milk for a good whipped cream substitute, tells you to use the nonfat whipped topping from the freezer case at the supermarket (which tastes like vaseline to me).  These are some serious fatal flaws. 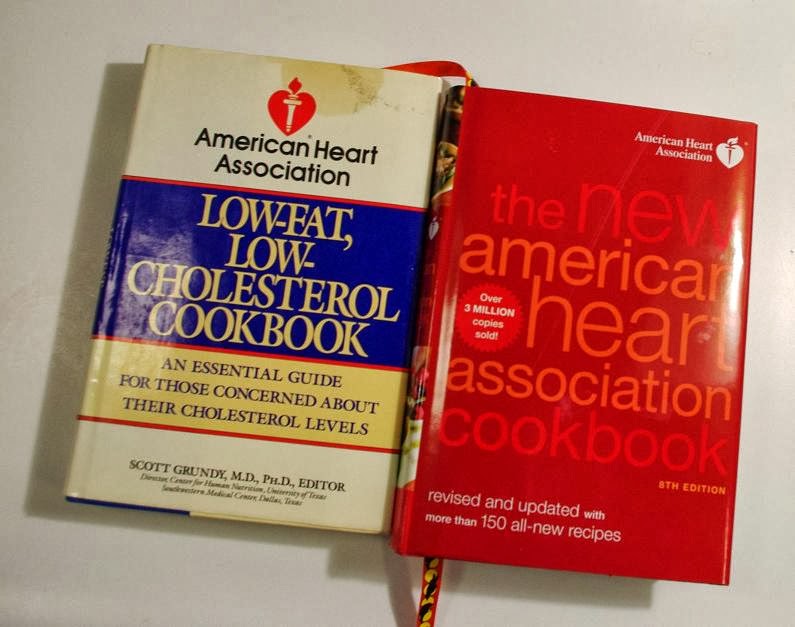 The recipes seem to rely upon really amping up the spices to make up for the missing salt; also, many, many, many of their recipes call for bell peppers, to which I am allergic.  If lots of peppers are vital for flavor, I'm kind of sunk.  However, I have tried a couple of their recipes, and those were pretty good.  Sadly, I just plain have not gotten back into the picture taking mode; there is too much else around here occupying my pea sized brain.

Long and short of this cookbook: Lots of good recipes, which mostly are not even recognizable as "heart healthy".  Good information, although not as thorough as a previous edition.  I think I'll live through this "learn to cook for a triple bypass survivor" thing, after all.
Posted by Marjie at 6:00 PM

You might want to also try the Moosewood Restaurant Low-Fat Favorites. Some interesting stews and whatnot. Back when I actually made dinner (setting a good example for the kids and all that), I used a lot of Moosewood recipes.

A new cookbook is an occasion for me, also. Good review.

I think the problem is with the original one folks actually cooked, and now everyone wants to just buy healthy food and not cook it!

I think, as you work through this, you should write your own. I'd buy it.

I love getting a new cookbook and curling up by the fire and reading it. My kind of fun!

It's too bad the new book is missing some important info - good thing you have the earlier addition for that! Your beloved it is good hands.

I should take a picture of my Heart Assoc cookbook. It's held together with rubber bands. It's been we;; used over the years.

I second the Moosewood recommendation. And of course, I too need "real" cookbooks and read them. I use the Post-it flags to mark things though.

Congratulations on your new cookbook Marjie!

I don't have much to add here. I agree with the Moosewood suggestion but I haven't seen the low-fat version. Keeping track of favorites and your own twists sounds like the making a of a Marjie cookbook to me. I know you CAN do it! I'd buy! And Channon thinks like me the post it flags work really well, I even manage to put notes on them sometimes:)

It's a brand new life at your house Marjie. You will master the bringing of goodies to us all one day soon:)