First things first.  For my book giveaway last week, Karin said, "I think you should give it to me because the only contest I've ever won is a cake-walk in Seattle when I was five years old. The cake was squished and tasted like lard and sawdust."  How could she not win with a comment like that?

And then there was the book sale last week.  You know, the one where I said I wasn't buying any books. 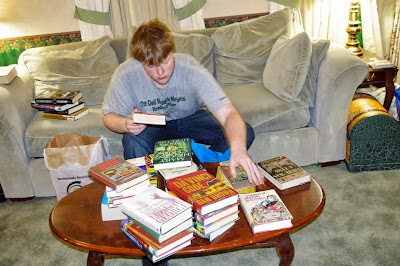 The boys carried them, and Ryan sorted them.  I only paid.  Does that count for not buying any books? 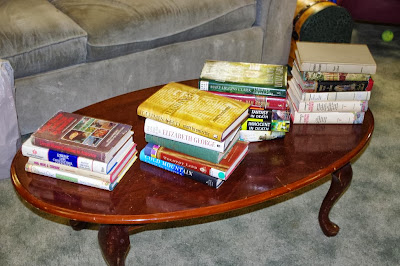 I bought 3 new cookbooks, one of which I really don't love, and two of which I think I might like.  I also bought a book for a friend, which I sent on Monday, and a stack of books for the relative in Denver, who doesn't drive and loves it when I send her some new books.  There were also plenty for the boys.  So I didn't buy that many, right?

I was intrigued by the cover of one of the books I sent to Denver, so I read it Saturday. 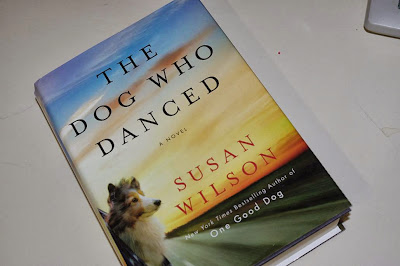 THE DOG WHO DANCED
by Susan Wilson

I opened this book and discovered that it was written in present tense.  You know, the way children write: "I am riding in the truck.  I eat a peanut butter sandwich.  It is gooey."  I decided then and there that I would give the book 50 pages (large type, so that's like maybe 30 pages in real life), and quit.

Justine had left home more than 20 years earlier, at 17, and had never returned to visit.  She has lived hand to mouth for all of those years, so she was understandably miffed when her stepmother phoned her to demand that she come back to Boston (from Seattle).  With no car and unable to afford airfare, a ride across country with an independent trucker doing a contract run is arranged; she is to pay Artie $200, and she can take her dog, Mack, with her.  As the book opens, Justine and Artie are in a truck stop restaurant in Ohio, arguing over the fact that she wants to shower before hitting the road again.  He agrees to wait 7 minutes, after which he will leave without her.  And he does just that.  A one legged biker riding a Harley (who turns out to be a long haired lead violinist for a symphony orchestra) offers her a ride to Erie County, PA, from whence Justine catches a bus back to Boston.  But Artie left with Justine's dog, and Justine is frantic over the loss.

The book is the story of Justine trying to find Artie, and retrieve Mack, while dealing with her father, who is dying, her stepmother, who is as selfish and uncaring as ever, and her stepbrother, who has turned into a rather decent fellow.  Interspersed are sections told (also in present tense) from Mack's point of view, and from the viewpoint of a couple who live around Springfield, Mass.  I can't tell you more than that, lest I spoil the story.

I was stunned by this book.  I read it in a few hours.  It was wonderful, despite the present-tense storytelling.  5/5

I probably won't be so lucky with my finds at the next book sale in 3 days.

Happy Thorsday, everyone!
Posted by Marjie at 4:26 PM

You had some great finds! Thanks for sharing them with us. I might need to read that book too; your reviews are wonderful!

Wait! I'll be right back. I just saw you did a post for Dictionary Day!

Looks like you managed to get some pretty decent books Marjie. Congratulations on refraining yourself. Our library had a book sale last Friday. I came home with 8 boxes of cookbooks for a shamefully inexpensive price. I actually felt so bad I made another donation, lol...

I think it's wonderful how you spread the wealth. I haven't gone through mine yet.

Congrats to Karin. I'm sure she is delighted.

Thanks for sharing, Marjie...

I must read this! Perhaps she wrote it in present tense because that's how dogs think?

One can NEVER have too many books.

I love it when a book surprises me! It sounds like a great read. I love the cover - it would have made me pick it too.

I AM delighted. As for this book, animal stories leave me a soggy mess -- still, I'm tempted. I don't mind present tense if done for a reason rather than just a trick.

I agree you can never have too many books. I'll have to look that one up. Sometimes I need a quick read that is well written even if it is a bit quirky.