Do you know Honey the Great Dane?  Well, she, or to be more specific, her person, Hsin-Yi, just wrote a book.  I was really excited for her when she got the Kindle version published, knowing that it was a dream of hers.  And now it's out in the US in paperback format.  I may have the first copy in captivity!

CURSE OF THE SCARAB
by H. Y. Hanna

Honey the Great Dane is miffed at her person, Olivia, for going away and leaving her with a Pet Sitter, who comes with a pesky puppy in tow. Olivia coos that Bean, the Great Dane puppy, looks just like Honey did; this is disloyal in so many ways! So, when it's finally time to take the Pet Sitter and Bean for an afternoon walk, Honey is greatly relieved. She takes Bean and the Pet Sitter to the Dog Park, where she can romp off-leash with her friends. On this particular day, in addition to Bean, there are two other new dogs in the park: Newbie, a rather ugly dog of uncertain breed, and Max, a retired Pit-Bull. Then, when it's time to leave, Bean has disappeared, leaving nothing but a scarab in her place; Honey's friends, Tyson, the Jack Russell Terrier, Biscuit the fat Beagle, Suka the Husky and Ruffster, a medium sized dog of mixed heritage, help with the search. And, worse yet, they meet an imperfect 16 week old puppy in a pet store who confirms that there are a large number of other puppies missing, and scarabs have been found at the sites of all of the disappearances.  Noney's friends suspect Max, the Pit Bull, because Pit Bulls are supposed to be mean, but Honey doubts that Max is involved.  Honey also has a very distinct fear of cats, which she must overcome. There are plenty of mysterious occurrences, heiroglyphics to be deciphered, and run-ins with the colony of Feral Cats. Ms. Hanna writes entirely from the dog's point of view, using references one can imagine a dog might make, such as the myth of the moon being made of liver, or exclamations such as "Howling Hyenas!"

This is a very well written book. It would be appropriate for middle school kids, and for older kids who love dogs. There is a fight at the end of the book, which would make this book somewhat inappropriate for children under age 10, unless read with a parent who could explain how the fight was good in the context of the larger events surrounding it.  I didn't know who was taking the puppies, or why, until it was revealed in the book, and had no idea where they were being held or how Honey and friends would retrieve them, which is the hallmark of a very good writer.  4/5 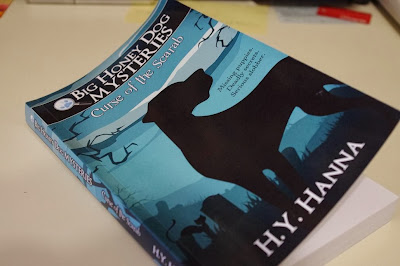 I don't know how you find time to read.

Congrats to your friend! I know a couple of dog-loving neighbor kids who might really like this.

Oh neat! I'm glad it's available here in the US. I'll have to score a copy...

I've started reading it and I love it so far!

Waiting for my copy... just can't do that kindle stuff.

Oh - I can't believe I've only gotten around to seeing this now! Thank you so much for featuring my book on your blog - I really appreciate it! :-) And I'm so happy you enjoyed it (and the hubby too! ;-) ) - thank you also for posting the reviews - I can't tell you how much they'll help to spread the word! :-)