Who here is surprised to learn that I've bought two copies of the same book during the course of the last 20+ years?  Silly me.  No one who knows me should be surprised.

I found this amongst my treasures from the book sales last fall, and decided to read it yesterday.  Yes, yesterday.  It was just that fast. 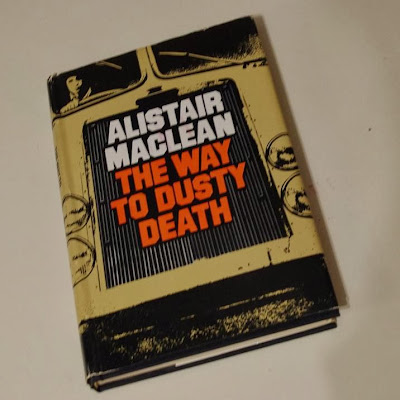 THE WAY TO DUSTY DEATH
by Alistair Maclean

Johnny Harlow is the best Grand Prix racer on the circuit.  In the opening paragraph, he's sitting in his crashed car, watching stunned as another driver is burned in his own car.  Ouch!  Why am I reading a book about car racing?  But I was drawn in, swiftly.  It looks like Johnny has lost it, and is becoming a good-looking has-been, falling into the depths of alcoholism from absolute sobriety.  He's also suddenly losing all of his races, in one case leading the first four laps and then quitting, citing a problem with 4th gear.

But this isn't a book about racing at all.  It's a mystery:  Why is his car suddenly failing?  Why has his team owner's wife been missing for 4 months, and the guy isn't finding her?  What's with the sudden turnover of mechanics?  Typical of Alistair Maclean, this is a well written, engrossing book.  And while I saw an inkling of the end coming, I didn't even come close to guessing the whole thing.  5/5

And since I have two copies, and have never needed a separate copy of any given book for each hand,  I'd like to give this to one of you.  Tell me why you'd like it.  I'll decide on Tuesday, and send it to someone next Wednesday, based upon who gives me the best reason why they should have it - "As a doggy teething toy" won't work for me - or maybe just do a random drawing.

Happy Thorsday, everyone!
Posted by Marjie at 4:51 PM

Sounds like a good read and it's nice of you to do a giveaway of your extra book. Hope you enjoy your weekend Marjie.

Aren't you kind and generous?!

Sissy says she should have the book just because she's the Queen. Gg isn't sure about a book about cars... she doesn't like vehicles. Me? I guess I'd like it just because you've never steered me wrong on a book.

I think you should give it to me because the only contest I've ever won is a cake-walk in Seattle when I was five years old. The cake was squished and tasted like lard and sawdust.