I first made these in August, and have made them once since.  This recipe was found in my old bread cookbook by farmers' wives.  I was not certain that there was a point to beating egg whites stiff only to be added to bread dough, but it was a cholesterol free recipe, which I wanted that particular day.  The cookbook said these were "hard, chewy and delicious," and they didn't disappoint.

Put the water in your mixing bowl or bread machine bucket, sprinkle the yeast over it, and add the flour, sugar, salt and margarine.  Start mixing, and add the beaten egg whites a scoop at a time.  Let the bread machine continue through its first knead cycle, or beat together with the mixer until the egg whites are thoroughly combined, then let the dough rest, covered with a clean towel, for 10 minutes.  Remove from the bowl, punch the dough down, and form into 16 balls.  Arrange the balls on baking sheets, flatten, and brush with an egg white wash.  Let the rolls rise until about doubled in size, 20 to 30 minutes, while the oven preheats to 425F (400F for a convection oven).  Bake 18 to 20 minutes.  Terrific for Sloppy Joes or other sandwiches! 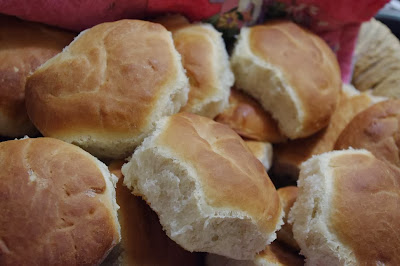 The beaten egg whites must have been the reason that these rolls had a very fine texture to them.  There were no large or uneven pockets in the rolls, and they had a nice flavor which didn't overpower the rest of the meal. I put mine too close together on the baking sheets, so they rose into each other, thus the sides are not smooth.  No matter; they were cut open anyway.

Brutus was still with us when I first made these, and, of course, he loved his.  I had already taught him that he could not beg at the table, nor could he try to stick his nose on the table, and that he would get a treat at the end of dinner if he was a good boy.  Well, he ate his roll, and looked longingly for another, which we happily gave him.

Happy Monday, everyone!
Posted by Marjie at 1:15 PM

Email ThisBlogThis!Share to TwitterShare to FacebookShare to Pinterest
Labels: bread

We finally got some rain today! How 'bout you up there, lol?

As always, your rolls look crusty delicious. I LOVE the notion that they are cholesterol free! I really need to start watching my intake:)

I bet Brutus gobbled these up and for good reason, they look heavenly (even with the edges:)

Thanks for sharing Marjie. I do hope you will make the Pasta Party:)

Those are gorgeous rolls though!

Oh, the story at the end was my treat.

Looks like a fine holder for some good BBQ.

i LOVE a bread with a truly crusty exterior and fluffy innards. fantastic.