Thorsday Book Review: A Shot in the Bark

OK, I chose to read this book because of the cover.  I'm allowed, right? 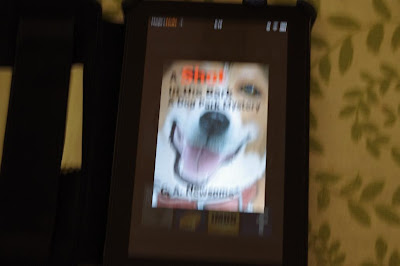 I got this book nearly a year ago, and just found it on my Kindle.  Such is the peril of loading up on good books: you miss some of them.  OK, you probably miss a lot of them.

Lia Anderson is an artist who takes her two little dogs to the Mount Airy Dog Park every morning to play; she's made plenty of friends there, along with acquiring the boyfriend she's dumping at the beginning of the book.  Of course, he's upset, and takes up calling her relentlessly until she unplugs her phone around 1AM.  The next morning, Lia arrives at the dog park around 5AM, so she won't have to see anyone, and finds said boyfriend dead in his own car, an apparent suicide.  We, the readers, know he was murdered, because every few chapters, the murderer pops up and tells us in a chapter written in italics, what she has done.  And the handsome detective, Peter Dourson, confirms this for us.

Thanks I will have a look for this. All the books you like I seem to enjoy as well. You have good taste :-) Keep well Diane

Sounds like a good one. Thanks for the review
Snuggles,
Benny & Lily

Bev and Pat are heading off to St. Maarten tomorrow and have loaded up their Kindle book readers. Think you will you ever get another little Thor.

Sounds good!! I've tried to clean up my Kindle - removing books that I've read, so I don't clutter it and have trouble finding the ones that I need to read!

I say it's the shrink with the mastiff.

I read this book on one of my trips, maybe to Chicago last fall? Anyway, I thoroughly enjoyed it and will be willing to pay for the next installment.

I'm trying to work my way thru some of the books waiting on my Kindle. So far I've found a few gems. The reading list sure does grow fast.

Hi Marjie, sounds like another good one to add to the list. No worries, and love, Carol (and Stella and Rory)

Of course you are! I'm all about choosing a book by it's cover when it involves a furry friend!

Sounds like a good & fun read. I love my kindle!