Thorsday Book Review: Out of Time

For all of you who wondered, Dan's cranberry bread turned out fine.  He didn't make a mess with the wooden spoon attachment for his driver drill.  And he swears that DeWalt makes excellent power tools as well as excellent kitchen tools.  (He even washed his bowl and spoon, after unchucking the spoon, of course).

On to today's book, from my trusty Kindle: 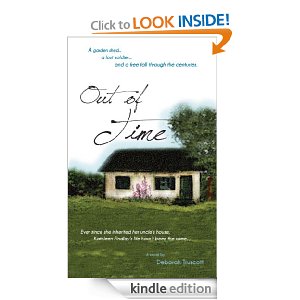 OUT OF TIME
By Deborah Truscott

On Valentine's Day, Kathy Lee Findlay is burying her beloved 17 year old cat, Earl, at her mother's house; her two small children are with her.  Earl is more loved than Kathy Lee's husband, a doctor, who has been sleeping his way through his hospital in Fairfax, Virginia.  The same day, Kathy Lee gets a phone call telling her that her father's brother has died, and she's inherited his Revolutionary War era house located on the Skippack Pike in Montgomery, PA.  After a few trips to the house over the course of perhaps 3 months, Kathy Lee has decided that she's going to sell the house; while looking in the garden shed for something one day, she found a man dressed in strange riding boots and oddly styled breeches.

I knew at that point that this book would be fun.  Lieutenant-Colonel Robert Christian Upton had ridden out of Germantown following the Battle of Germantown in October, 1777, dismounted, sat upon a wall, and ended up in Kathy Lee's tool shed.  He was perplexed by her strange gown and why it was so beastly hot for October.  She invited Colonel Upton inside for tea, and the story really began.  Once Kathy Lee began to believe that Colonel Upton had fallen into some sort of time warp, and once he fathomed the same, a plan needed to be formulated to get him back to 1777.

Instruction on modern technology, from the nifty opening wheel for canned soup and the magic of the toilet to the automobile (which Col. Upton surmised must come from "auto" for "self" and "mobile" for "propelled"), a crash course in 200 years of history, a road trip to the Outer Banks, and this was a great book.  Of course, my brain thinks deeper even when enjoying a book, and I was struck by the wonder, to Col. Upton, of even the simplest things.  One comment he made, for example, was that our populace looked well fed, healthy and clean.  It made me thankful for those things we take for granted.  So if you're looking for a fast paced, entertaining read, look for this.  5/5

Happy Thorsday, everyone!
Posted by Marjie at 7:11 PM

Oh!! I'm supposed to be downloading my book club's Lean In or whatever it is, but this sounds so good...

Off to look for this one to add to the collection. Thanks. Have a great weekend Diane

I think I will LOVE this book! I am off to check to see if it's on kindle.

I hope you enjoy your weekend my friend.

Wonder what he made of the internet.