Just before Easter, the newest James Bond movie came out on DVD; of course, the boys had to rent it for everyone to watch and enjoy.  Personally, I thought it was the worst James Bond movie, because there seemed to me to be no coherent story line until about halfway through the movie.  We can live with the improbable gadgets and action in the Bond films, because the good guy always prevails, and that makes us feel good, but without a story, the unbelievable action is pretty well intolerable.  Just my opinion.

So, anyway, while wandering through the house, Jeff discovered that we had a few James Bond books, and opined that he might read some of them the next time he was home.  I noted a few days later that we had a duplicates of one of them, so pulled it off the shelf to ship to Jeff, along with another I found at last week's book sale, and read one before it got into its box. 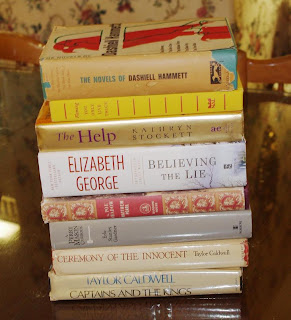 YOU ONLY LIVE TWICE
by Ian Fleming
copyright 1964

James Bond was depressed.  A bad guy had murdered his wife when he'd only been married one day (and who knew the eternal playboy was ever married?), so he'd been slacking off, drinking and not working.  M summoned James to his office and sent him to Japan on assignment to get the intelligence the Japanese were sending to the CIA and not to Britain.  Of course, this means time spent with a dude named Tiger, in a geisha house, learning Japanese ways, because James is to destroy a place known as the Castle of Death.  Once he learned that the proprietor of the Castle of Death was the same guy who'd killed his wife, Bond was really on to the program.  Pearl diving, a cute girl named Kissy Suzuki and a disguise as a tall Japanese man all were involved, as one might expect.

As I expected, having read Chitty Chitty Bang Bang as a child, Ian Fleming's descriptions of settings and events can become rather wordy, but the book is pretty much what one might expect.  Amusing distraction, nothing more, but well written.  3/5.

Happy Thorsday, everyone!
Posted by Marjie at 3:47 PM

Back in the 60s I was a Bond fan and read all the ones written by Ian Fleming. I'm no longer a Bond fan, but those were fun times.

Sooooo not a Bond fan. Wonder if I'd like the books any better?

Hah! It never occurred to me to actually read a JB book. Thanks for the review -- I'll pass.

I've never read a JB book either. I've seen most of the movies but I'm not a huge fan either.