I mentioned that both Natasha and Tank were here for Easter; of course, they brought their people.

Natasha isn't that fond of Tank.  Let's face it, she's almost 6, and for a big dog, that's pretty old.  Plus, Natasha is cranky.  Very cranky.  So while the two of them romped outside and (sort of) played together, or at least played near each other happily, she growled every time Tank tried to play with her indoors.  "Go away, kid!  You're way too bouncy for me."  In this picture, she had been enjoying one of her beef ribs, and saw Tank about 10 feet away. 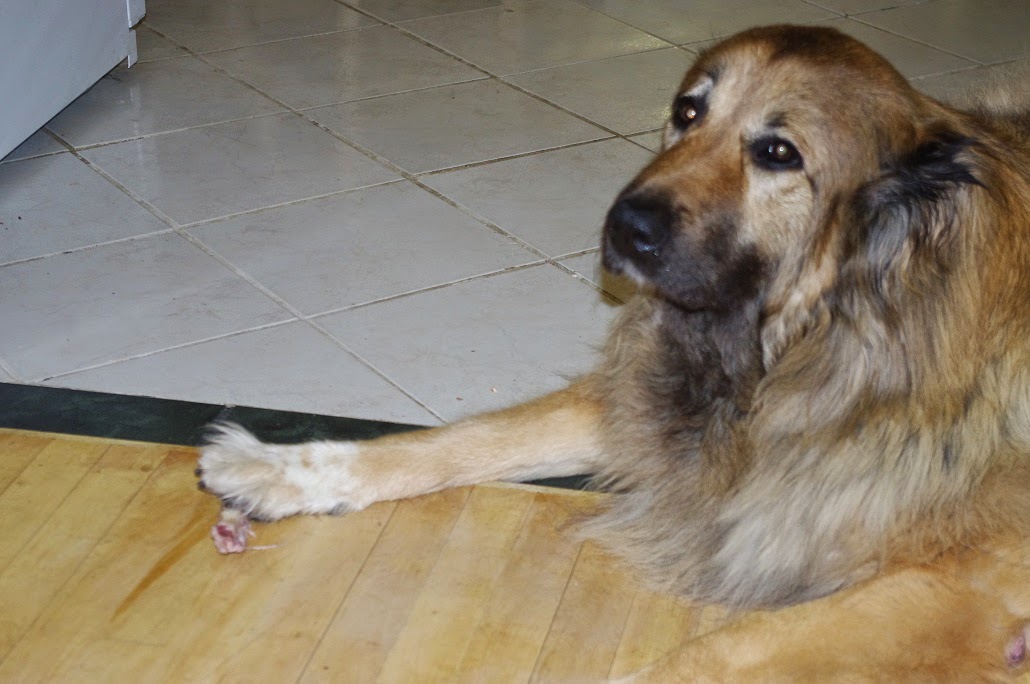 Note the bone under her right front paw.

Tank was his ever-jolly self.  Remember how he found the little pink rug in the corner when he was last here? (Here's a picture to help you remember.) 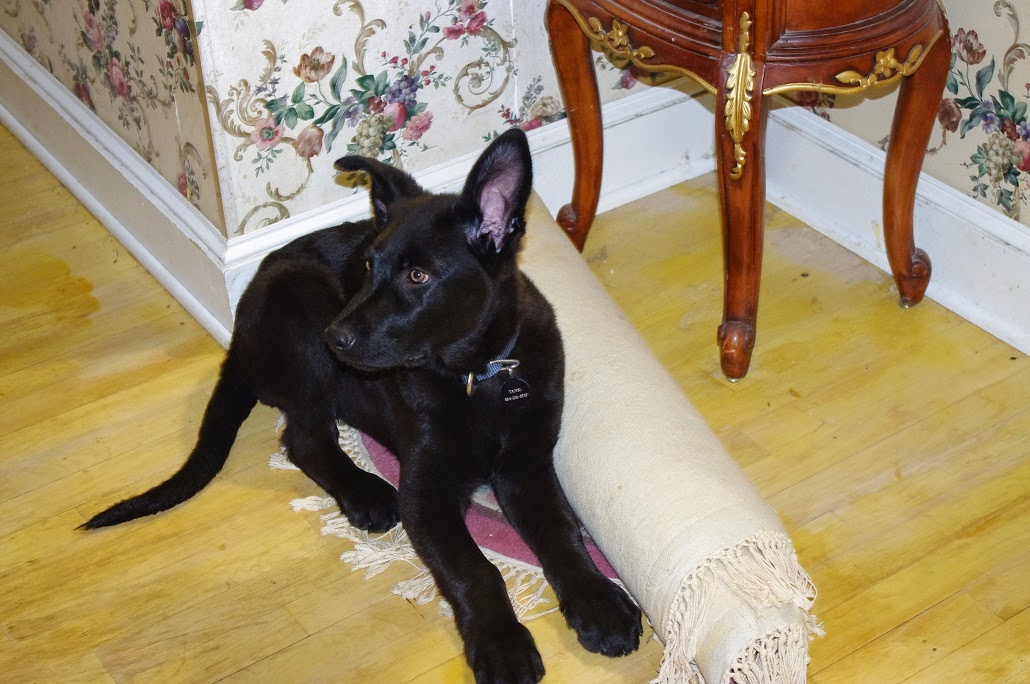 Well, I left it rolled up and under the table you see in the background, and he found it and tried to pull it out of its hole.  Of course, I helped him get his rug back, and he brought his toys to his perch. 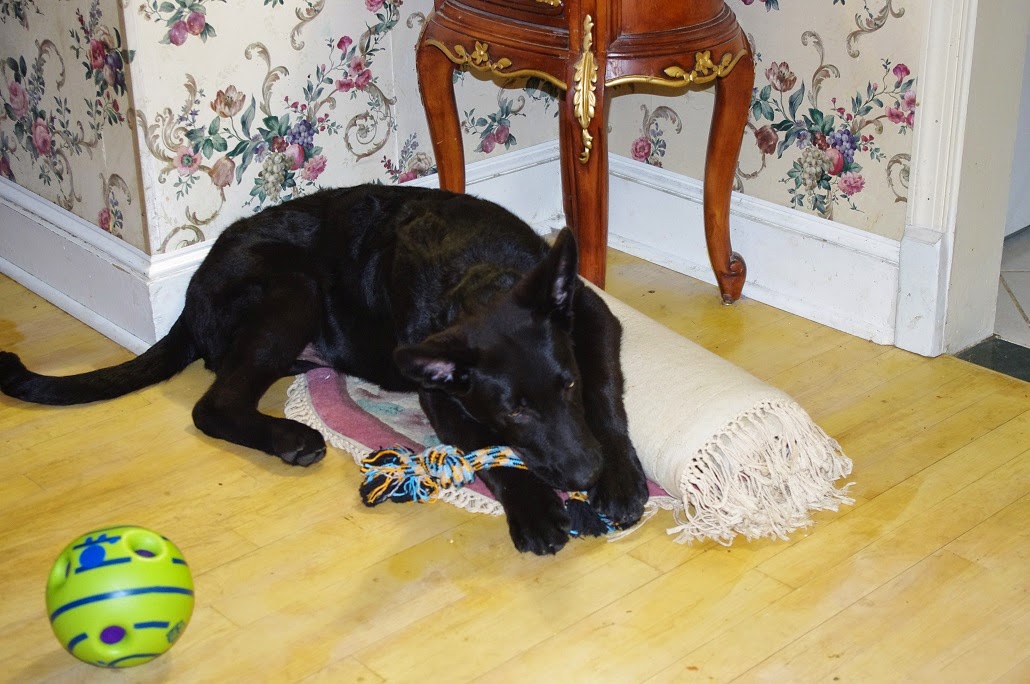 And what happens when a puppy romps in the mud?  His person washes his feet, of course.  He was not amused.  Thereafter, he let Jeffrey wipe his paws every time he came in. 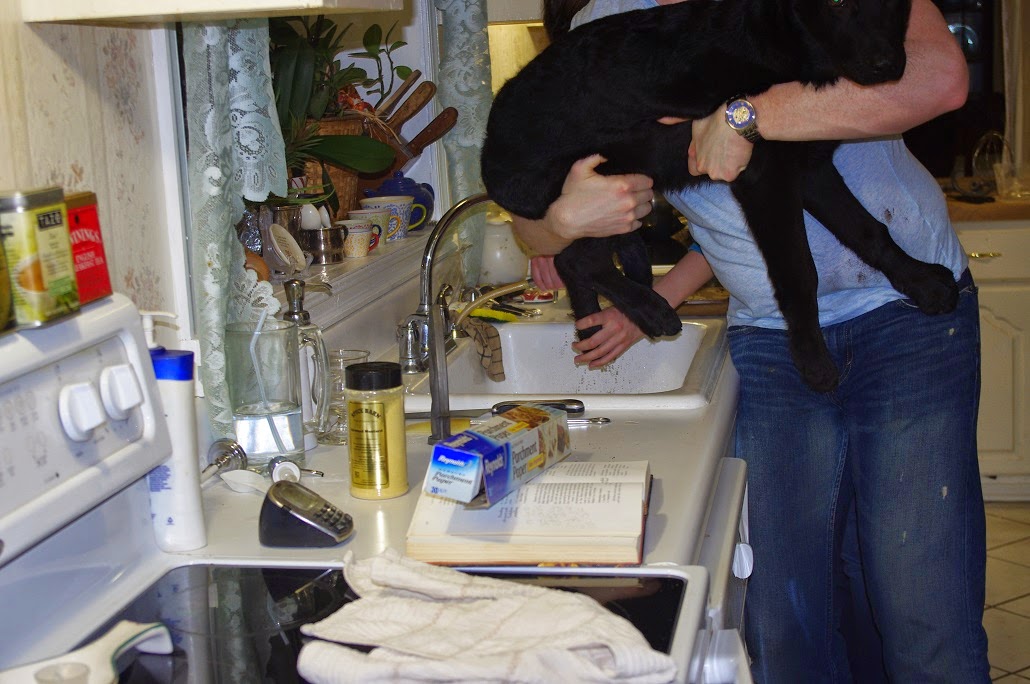 Happy Thorsday, everyone!
Posted by Marjie at 3:31 PM

Email ThisBlogThis!Share to TwitterShare to FacebookShare to Pinterest
Labels: Dogs on Thursday, holidays

Looks like he's claimed that rug as his own. Natasha is much too grown up to put up with silly puppy stuff.

Oh Marjie, aren't they gorgeous. What type of dog is Natasha? When our daughters' dogs are here Tyler (labrador) loves everyone but Jinx tolerates the others (she is a 15 year old kelpie and ex farm dog so takes no shxx from anyone hehe). Loved your photos. I feel the need for a flashback Thor and Brutus day from you :-) Have a great weekend. No worries, and love, Carol (and Stella and Rory)

It's nice that they bring their people when they visit.

Doesn't having Natasha and Tank visit make you want to get a dog??? They are both very cute.

Our older cat is quite grumpy with our highly energetic dog too.

Your shots do an excellent job of capturing their character. Natasha is protecting her Top Dog status.

Poor Natasha. Puppies can be ever so annoying. Hopefully the little scamp listens to her warnings.

They sure are some cutie-pies!