OK, some people call these "smoothies".  But, to me, that's not a word.  If you've been around here for a while, you know that I'm weird about words and things like that.  So, just roll with me, these are blueberry shakes, OK?
I found this recipe in French Women Don't Get Fat.  I've been making a batch a day for the last 10 days or so, and both my dearly beloved and I have lost 3 pounds.  No other changes, just this blueberry shake for breakfast instead of whatever else we might have had.

This is not exactly how the recipe was written, but this is how I make it.  Put the blueberries in the blender 20 to 30 minutes before you want your shake.  When you're ready, add the remaining ingredients in the order given.  Pulse to loosen the blueberries, then blend on low for 30 to 45 seconds.  Makes 2 very large shakes. 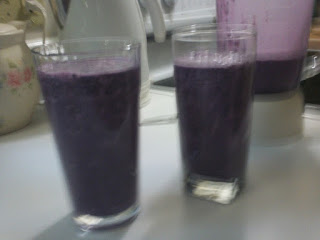 (When you look at this picture, remember: blurry is beautiful.)

Note that the book says this will serve 4.  But there are only about 400 calories in the entire blender, so I'll have half of that.  It's less caloric than almost any breakfast - cereal with milk, eggs and toast, waffles....you get the picture.  And it will carry me for 4 or 5 hours without a problem.  The original recipe called for lemon juice and cardamom; I deleted those and added almond extract, which I love.  I added the stevia because my dearly beloved didn't think it sweet enough with just the honey - remember, this is the man who says he doesn't like sweets!  Now, if his shake doesn't arrive within 20 minutes of his being up, he starts to complain: "I'm starving!"
Posted by Marjie at 6:08 PM

One of moms favorites
Lily & Edward

Oh excellent, because I bought blueberries on a whim today and wondered what to do with them.

We seldom see blueberries here which is sad as we both love them. Perhaps I should try growing a few bushes. Have a great week Diane

Looks delicious Marjie. When we were in Montana, they had Huckleberry shakes that went down real easy as well.

They sound - and look - delish!

Thank you, thank you. I hate those made up lazy words too, like smoothie and hoodie. Are you so busy that you can't take time to say the whole word? Give me a break!

I love blueberries, and they are good for Sissy and her eye. Hmmm...

Sounds yummy, and painless weight loss ? Bonus :-)
There are blueberries in the fridge, some earmarked for tonight's small batch of ice cream. Maybe a shake as well, now.

Mmmm. My kids would Love these.

Blurry or not, looks and sounds great! and blueberries are so good for your eyes!!

that little bit of almond extract is a great touch! these are some nutritious and delicious and BEAUTIFUL shakes!