The past couple of weeks have been a circus.  A dishwasher leak (for the third time in 6 months), a dead well pump (at 9PM on a Saturday, when they came out, diagnosed and went away, only to return at 5AM Sunday and actually fix it)(my well company is wonderful), Mark's last week of school, and I don't remember what else.  So, while I finished this book a couple of weeks ago, I've been remiss in my review. 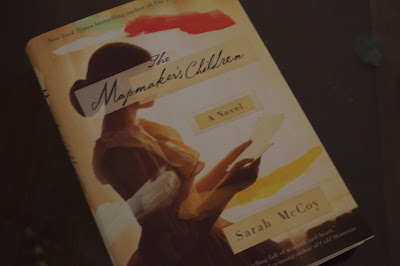 THE MAPMAKER'S CHILDREN
by Sarah McCoy

This book is two parallel stories.  One is the story of Eden, married for several years and a little unbalanced following a couple of years of failed fertility treatments.  She and her husband have just bought a historic house in West Virginia, and he brings her home a dog to keep her company.  Eden is less than amused, so her husband hires the 11 year old girl next door to walk, feed and care for the dog.  Eden becomes attached to the child and the dog, begins to acclimate herself to her new town (a far cry from her busy life as an executive in the city before the move), and starts to learn to cook by cooking for the dog from a holistic dog cookbook which the little girl has brought her.

The other is the story of Sarah Brown, daughter of the abolitionist John Brown.  Her story opens just before he leads the ill fated Harpers Ferry raid, and continues for several years, involving another family in West Virginia.  It isn't revealing too much of the story to say that Sarah is a gifted artist, whose talents are recognized by her father when, shortly before the raid, she happens upon her father trying to direct a slave family on the Underground Railroad to their next stop, and draws them a pictorial map, which looks like a picture, to guide them.  Her map proves so successful that soon she's drawing them for all of the escapees, and continues even after her father is hanged.

The two stories are told in alternating chapters, and there is a confluence at the end of the book - not only the confluence I expected, but another one as well.  Sarah's story is sad, but Eden's story ends differently than I might have thought.  This was excellent historical fiction, using real people and events woven into a possible story, and overlaid with today.  5/5

Note: I received this book free from Blogging for Books.  All opinions are my own.

Happy Monday, everyone!
Posted by Marjie at 4:41 PM

That sounds like something I'd enjoy. I'm off to Amazon to look for it.

Got me hooked. This sounds fascinating. Our local library is getting a little more cutting edge; I'll see if they can get it.

Excellent review - you have me totally wanting to read this one.

Cooking, history, and a dog? Sounds like a great read.