Pandora "Dory" Ryan is a grad student, working on research for her PhD.  She's not a typical student: she's a 40-ish, slightly overweight, divorced, former rock band staffer.  So, she really doesn't feel that she fits in with the other researchers at the provincial archives in Avignon, but she has become very friendly with a nun who's there.  Dory's research involves the lives of nuns about 100 years ago, and one day, a document mysteriously appears in the record book she's using, which appears to be the diary of a novice at the convent.  The diary mysteriously appears and disappears over the course of several days, and Dory can only get some of the pages copied before it's just gone.

Then, one day, the nun who's working in the archive is murdered in the bathroom.  About the same time, a Frenchman who claims to be a policeman has appeared at the archive, but he's not who he claims to be.  And another woman doing research in the archive is searching for clues to a reliquary that she says belonged to her family is distraught because she felt the nun held a key to that item.

It's all very intertwined, and all made harder to pierce because of the difficult attitude of the archivist.  But the descriptions of Dory's apartment, neighborhood and favored cafe, as well as her visits to the convent and to rural areas away from the city are wonderful.  At least a dozen times I knew who killed the nun, and at least a dozen times I changed my mind.  This was a very good book, available for Kindle and in paperback.  4/5 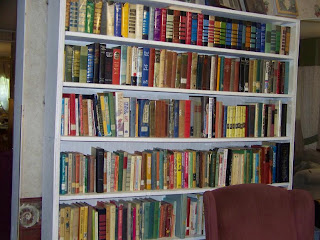 I like books where I can't guess the ending right away. That's why I like Jodi Picoult so much. Her endings usually surprise me.

Sounds good to me!

how do you find the time to read and sew and do everything else... you are amazing!

PS Had trouble with the blog... now there are 2 of the same post. Thanks for stopping by one of them!

Who would kill a nun? Must be a true villian!

Another great read to add to my list! I hope you enjoy your weekend Marjie.

You've talked me into this one. I'm going to check the library today.