I first found this author through Kindle, and his books have become favorites.  Paul Levine can weave a fine story, with believable and likable characters.  Here's the most recent of his books which I've read.

TO SPEAK FOR THE DEAD
by Paul Levine

Jake Lassiter is a lawyer in southern Florida.  (As a side note, Paul Levine must have some connection to southern Florida, since everything I've read by him has been set there, and he makes you really feel the atmosphere there.)  When the story opens, Jake is defending Dr. Roger Salisbury, an orthopedic surgeon, in a civil action, wherein the widow (the much younger second wife) asserts that Dr. Salisbury killed her husband during the course of back surgery.  Jake wins the case, and the dead guy's daughter shows up, infuriated, claiming that she has evidence that Dr. Salisbury did kill her father.

In the process of trying to prove or disprove the daughter's assertions, Jake and his friend, the retired Medical Examiner, Dr. Charlie Riggs, exhume (without permission) both the decedent and his first wife, and haul them to Granny Lassiter's house in the Florida Keys for an unauthorized autopsy.  Oh, and the widow sends her 'Roid Raged bodyguard to try to throw Jake to the gators in the Everglades.  The whole book is rather lighthearted and fun, while retaining an air of plausability.  This is the second Jake Lassiter book I've read, and I'll be on the lookout for more of Paul Levine's books at the next Library Book Sale.  5/5. 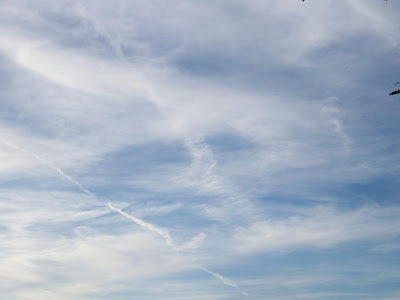 that sounds fun! I'll have to keep an eye out for it. g

Oh boy! Thanks for the tip.

Interesting. Never mind that Jake's pal's name is similar to that of my departed stepdad... who lived in FL.

My friend Alice just gave me some new books to read-- an Agatha Christie!

I'm book-full for the moment, but I love your sky.

If you give it a 5 then I am ready to read it, thanks. Have a good weekend. Diane

I don't think I've ever read anything by this author!! Must remedy that. I will simply explain to hubs that it is your fault that I have to buy some more books!