Today, our family's most faithful and loyal friend is 10 years old. I thought you'd like a look at being a mastiff in this corner of the world.

Is there anything cuter than a 7 week old mastiff puppy? I don't think so. 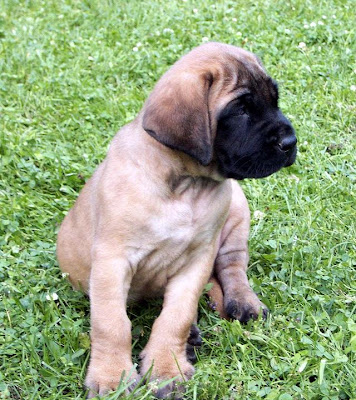 he's always wanted to join in whatever was going on. 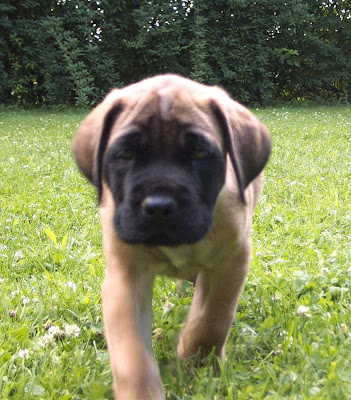 And, of course, to be right in the middle of his people, even on his first day home. 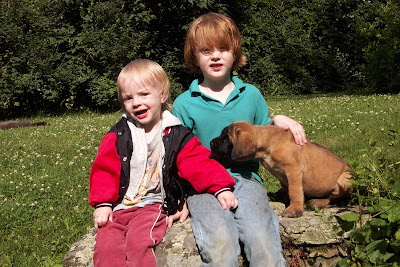 He went picnicing at a friend's lake cottage on his first Fourth of July. That's a chewed up paper plat beside him; he was destined to be spoiled. 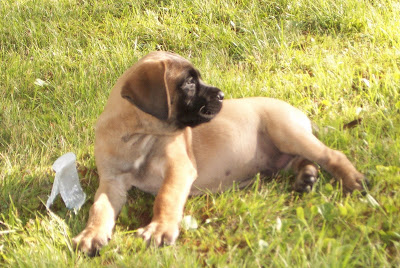 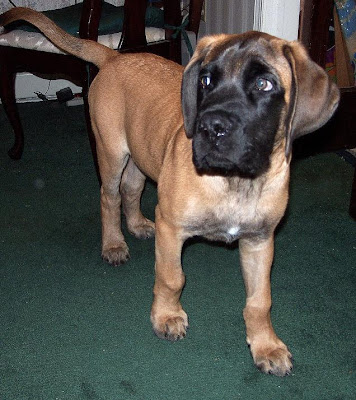 Back at the lake cottage 2 years later, for another 4th of July celebration! Of course, he was still right with the little boys. 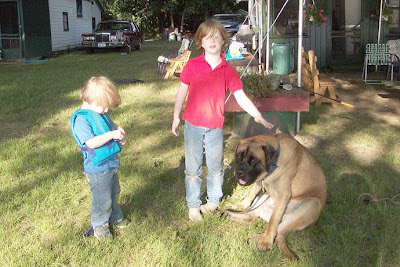 He's still right in the middle of his boys. 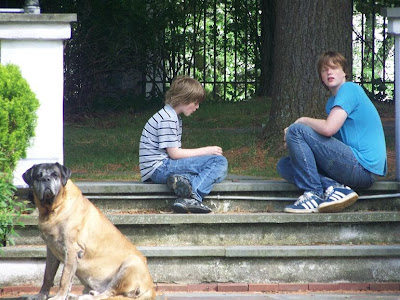 He was a handsome 2 year old. 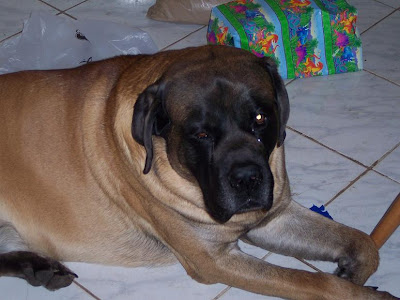 Plenty of people joined him in celebrating his 6th birthday, too, complete with hat. 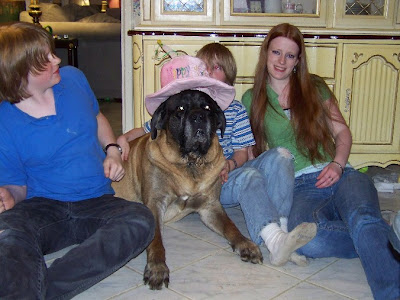 Today, he's a little grayer, but still right wherever his people are. 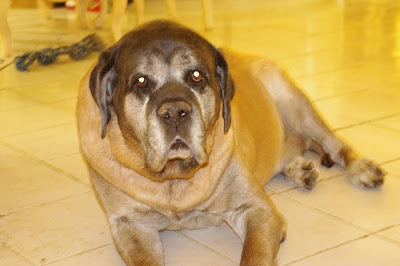 Tonight Thor will be having his birthday cake! More pictures tomorrow, I'm sure!
Posted by Marjie at 12:10 PM

Email ThisBlogThis!Share to TwitterShare to FacebookShare to Pinterest
Labels: Dogs on Thursday

From an adorable baby to a handsome adult. Happy Birthday Thor.
Morgan, Tsar and the Porties

Happy Birthday Thor! You sure were the cutest puppy ever. I hope you have a great birthday with your people!

Thor, you were an adorable baby and you're quite a handsome man. Have a wonderful day and cake.

Hi Thor - I am new to your blog, got here from Mango's blog. Happy birthday - you are amazing, I think you were the cutest pup ever :):) My chocolate lab Indy Bones wishes you the very best birthday and many many more :):):)

Since Mango can't get his DOH to make him a liver's cake we hopes you can get yers to make you one!!

Happy Birthday Thor! What a handsome fellow you are. I hope you have many more birthdays with your little boys.

Happy birthday to the sweetest and cutest dog in the world!

OMD, what an adorable puppy you were, Thor!!! We came by from Mango's blog to wish you a very happy birthday - you are one handsome dude.

Did yous hear me Momma screaming awwwwww all 'da ways from chi- towns?

Me must admits, you do look like me's as yous puppy selfs

Happy Birthday, Mr. Thor!! We came over from Mango's as well. OK, we have to admit, mastiff puppies are almost as cute as rottie puppies!! Congrats on turining the big one-oh! That's HUGE!! Best wishes and lots of Rottie Kisses,

The Mango told us to stop by to wish you a happy birthday... and we ALWAYS do what the Mango tells us to do!

Happy Birthday, Thor. You were a cute pup and there's nothing wrong with turning gray.

Oh, that little puppy tummy makes me all squeaky-voiced.

We are stopping over from Mango's blog to wish Handsome Thor a Very Happy 10th Barkday. You have grown into a very handsome mastiff. BOL.. Sniffs, The HoundDogs

The Life of Riley said...

Mango sent me over... Happy Birthday. I loved seeing your puppy photos - you were/are so cute.

Carol from Down Under said...

Hello Thor and Happy Birthday big fella. Looks like you have had a wonderful life with all those kids to spoil you. Enjoy your special day. No worries, love Carol.

Happee Birthday Thor. And you are still handsome
Benny & Lily

Happy Birthday Thor, we loved your puppy pictures. You went from being the cutest puppy to a very handsome grownup.

Oh my goodness, you WERE the cutest puppy! Although I have to say, Mastiff puppies look SO much like Dane puppies that we may be a little bit biased - ha! ha!

Can't wait to hear all about the delicious special treats for your birthday - lucky you to have a human who can cook!!! :-)

Happy Birthday Thor!!! I love the picture of when Thor and the boys were little!

Oh SQUEEEEE! You were like totally the second most handsomest puppy ever. And look at your wee little human pups. Happy Birthday big guy and thanks for the cake. I hope piggy piggy momma remembers it is for ME.

Happy Birthday, Thor!!! You were an adorable pup and an more handsome dog!

Happy Birthday, Thor! We're friends of Mango's and we wanted to wish you a happy birthday! We've had a family of Methuselahs (my miniature poodle sister TaiChi lived to be 20, and my cat brother Mr. Bufus lived to be 22), so we think you're just perfect! And while you were super cute as a puppy, we think you're even more handsome as a venerable doggie!

Oh Darn! I'm late to the party. You can see between 7 weeks and 13 where he went from a puppy face to a big dog. He's still so very, very handsome - isn't he? g

Happy Birthday, Thor! May you continue to enjoy a long life surrounded by people who love you! We're looking forward to seeing the pictures of you gobbling down your cake. Eat an extra piece for poor Mango, as he didn't get a cake.

Food, Fun and Life in the Charente said...

What a great history in photos he is just so adorable. We wish you a very happy birthday Thor.Diane & Nigel

10 years!! that is amazing !! have your other mastiffs also gotten that old?
SO cute as a puppy! You can never ever resist a mastiff, puppy nor noble elderly gentleman..

Happy Birthday, darling handsome Thor. I hope Momma lets you have a second piece of your birthday cake because your certainly deserve it. I send lots of loving big huggles and we both hope you got some sunshine today,

Michelle and a sleeping Zebby (he is practising sleep for you), xxxx and puRRRRumbles

HAPPY BIRTHDAY THOR!!! I'm sorry I'm late for the festivities. You sure were a cute puppy and have certainly evolved into one handsome dude!!!

wooooooow you were so cute as a pup ^^
hope you are having a super duper cake and party!

cant wait for the photo's :)
and we dont see grey thor only a super fantastic mastiff :)

Hey Thor, I congratulate you too can only later for his birthday. Just today I got home mom. She was a few days in hospital. Unfortunately I can not depend solely on their computer.
Dear Thor, subsequently, we congratulate you most warmly on your birthday.
Stay healthy and beautiful gladden us continue with your stories and adventures.

Hello, I'm here from Mango & Dexter's blog to with Thor a very happy birthday. He look quite handsome in his 10th year!

Hello Thor! I found your mom's blog title in Rottrover's side bar and I just couldn't help but become your newest follower! I love your mom's blog very much; it is so inviting and relaxing to be here!
Happy birthday, Thor! You looked adorable as a pup but now you look distinguished, mature, and handsome!
Come by to see me (Daisy the coon hound) and my 2 kitty brothers sometime, okay?