This is the first of probably 3 sets of pictures taken along 287 from Fort Collins, Colorado to Laramie, Wyoming. 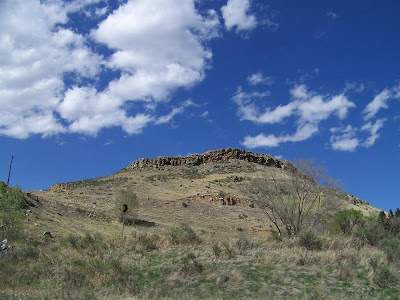 It's fairly early spring there; this is as bright green as the foliage will get. The sky was spectacular last Friday.

This rock formation was on top of a hill. I believe it to be natural, since there were many rock formations which looked like separate stones piled up, but upon closer examination were just larger rocks with cracks in them. Of course, I did not climb to the top of this hill to check it out myself. 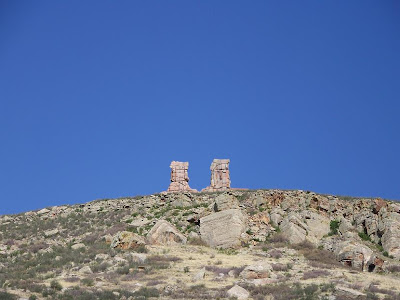 The evergreens in Colorado are really nice. 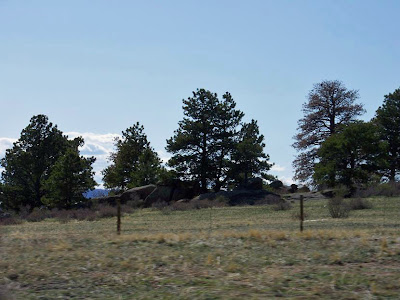 Looking down a hill, out the front windshield of the rental car, which was a big disappointment. (Let me state here, in case anyone wonders, that I will not be trading my 1995 Cadillac in for a new one. The new one is too small, with too many electronic gadgets and crap. I also didn't like that it beeped at me that I was driving erratically because I corner close to the shoulder on right corners. After 34 years without even a fender bender, it's safe to say that I'm competent to drive without the supervision of a car.) 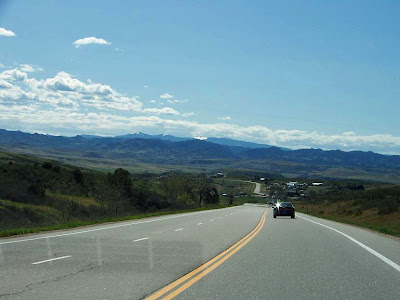 The farther west and north we went, the more snow appeared on the hillsides and in gulches. We also climbed in elevation from 5,000 to 8,000 feet, with more snow at higher elevations. 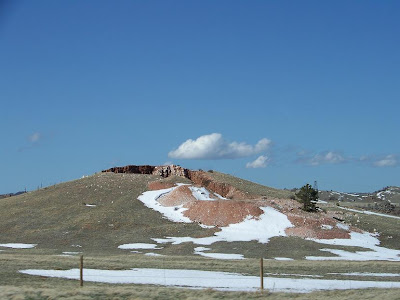 The sagebrush is a strange contrast to the greener plants. All look really nice in contrast with the red rocks. 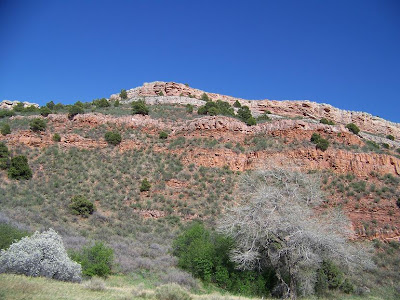 In some areas, the ground was quite flat for a long distance. 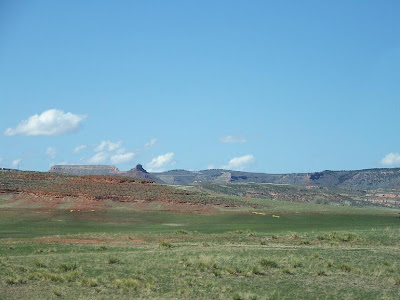 In others, the gulches were quite dramatic. 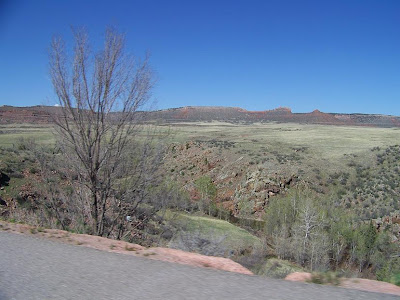 They actually have a little green now. When I go West after living in the lush green East, it's hard for me to believe it's the same country.

Okay... it looks like you've been on a trip and no one even told me. (does that tell you how far out of the loop I've been lately?)
I guess that I've got some serious catching up to do, so I've got the coffee perking as we speak, and I'm ready to read... Yee Haw!

I had to smile at the car beeping at you. I am so sick of appliances that "talk" to me. My new washing machine, dish washer, iron and sewing machine all beep at me for various reasons. I'm capable of using each of these without their constant chatter.
Sue

Gorgeous pictures! My husband's car beeps when he gets to close to the car in front of him, I love it. It saves me from having to dramitically brace myself with the dashboard during his driving.

Beautiful. Stark and different from our east coast, but stunning just the same.

so beautiful, nice to see NO traffic
Benny & Lily

Thanks for the trip, I haven't seen that in years and the last time I did it was brown and dry!

These photos are terrific, and they fill me with tremendous longing to go out west again. I remember the mesas and the sagebrush so well.

Thanks for the trip it is so new to me but I cannot believe there is snow still lying around. I saw the name of your next post....... Diane

Is beautiful. I need to once again come to the area
Lots of love
Violett

Such gorgeous scenery! My old roommate always wanted to move to Colorado...and now I see why.

I love that country. I drove through enroute back to Canada from TN. It was winter.

We used to go to CO every summer. I loved it.

Gorgeous photos Margie, that blue sky is like nothing I have ever seen before! p.s. my car beeps at me if I get too close to the yellow line too, bugs me to death!

Thanks for sharing these pictures Marjie.

I have such a time adjusting to the scenery west of the Mississippi. 287 is a familiar road to us. When Michele and I drove cross country, Noah got car sick amongst the sagebrush.