This lunch was a no-brainer the day after I made my wheaten rolls. The microwave sure does make lunch easy, doesn't it?

Toast the rolls a little, if you like, or just warm for 10 seconds each in the microwave. Put the chicken in a microwave safe bowl, add barbecue sauce to taste, and microwave until hot. Place a slice of Swiss cheese on the bottom of each roll, spoon the chicken mixture over the top, and cut a scallion (I use kitchen shears) over the chicken. 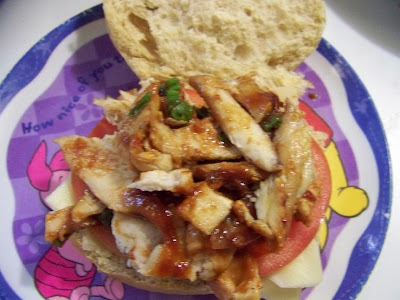 Top with another slice of Swiss cheese, and close the roll. Delicious lunch in about 3 minutes! 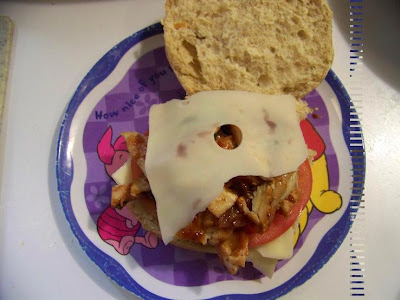 Do you like Craisins? We do. So, when trolling about amazon recently, I stumbled on a 10 pound box of them. I didn't know quite what to expect, because the picture was a brown cardboard box, so I eagerly awaited their arrival. 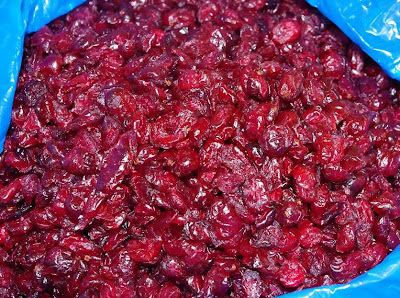 I was delighted. These Craisins were the softest, freshest, plumpest ones I've ever had. They are a bulk pack, meaning 10 pounds in a plastic bag inside a very sturdy cardboard box, but I just took a tightly sealing jar with a hinged lid, put a bunch in the jar, and everyone's snacking away - even those sons who claim to be not terribly fond of Craisins! I've refilled this jar once already since Wednesday. If you have the space for them, this is the best way to buy Craisins, IMHO. 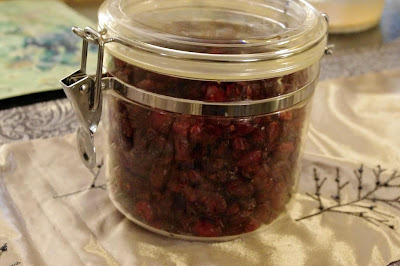 Your sammy looks yummy. I love craisins - I add them to granola and oatmeal and snack on them. But buying food from Amazon is outside my comfort level :) g

Hard to beat a good sandwich on a homemade roll - yum

I wish I was having one of those sandwiches for dinner... yum!

So I'm making a similar sammie for supper and I love craisens. I make a matrimonial cake out of them sometimes and even use them in apple pie.

You know I love anything cranberry, so... even with the chicken in there, I love this sammie.

I want to come to your house for lunch.

craisins make a terrific snack, but i think it'd take me a year to barrel through that many!
great sammies, by the way. the roll's the key.

You've used the "L" word, you know - Leftovers! Did you hide the cooked chicken at the back of a fridge?

As you have 4 sons at home just now the box of craisins must have felt like a blessing. Those are definately the juciest looking craisins I've ever seen.

Hope your lads can feed themselves on Superbowl Sunday. The following weekend there will be International Rugby Sevens* from Las Vegas free to air on NBC - relax, most matches are just 7 minutes a side.

*Yes, okay, NZ has just won the Wellington round of the International Rugby Sevens circuit. The U.S. team did very well here, winning over France in one of the lesser finals (and getting the crowd's support).

Please ask Thor to supervise his four boys carefully this Sunday in case they get too excited watching the 'merican football final. Zebby sticks to his "insert a claw into that human's leg" control method - guaranteed to get a yelp!

I had to look up Craisins, aha dried cranberries now I know :) Mmmmmm I love them. DCiane

My husband is on a gluten free diet. I get hungry just looking at your delicious foods! Cooking is getting extra hard here!

Easy peasy as Marjie says:) (did I spell that wrong?)

10 pounds of Craisins doesn't sound like that much. On second thought, maybe it does. At least it's craisins and not junk food. After all, February is Snack Food Month!!!