I went the semi-lazy route for Super Bowl Sunday this year.

Dan, Jeff and I went on the Super Bowl Food Hunt on Saturday. You don't even want to know how much I spent, between food, staples and Thor's vitamins. But the boys had a terrific time, and the trunk of my little blue winter-beater Caddy was full; some things had to go in the back seat. 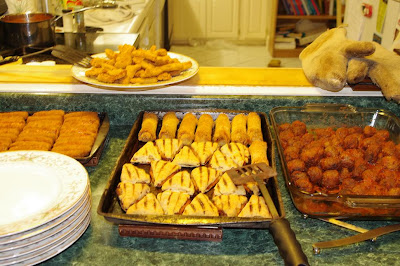 I made deviled eggs and dip, served with several kinds of chips for the first half. I made meatballs and marinara sauce, Dan pre-made quesadillas (filled with chicken and cheese), which I reheated and served them with mozarella sticks, egg rolls, and dinosaur shaped breaded chicken pieces. 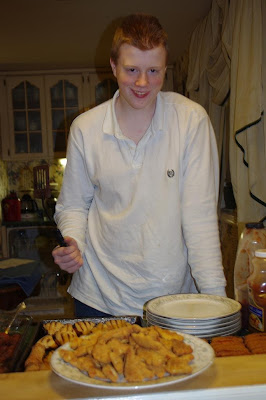 The boys were very excited about having dinosaurs for dinner; I think they're all about 5. 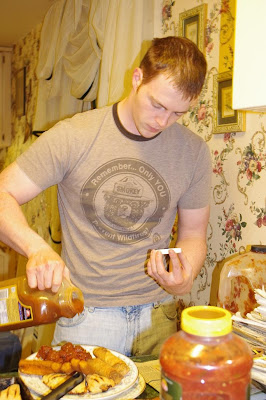 Dessert was cream puffs; easy and light after all that meat.

No Super Bowl report from my house would be complete without my "dumb broad" comment of the year: "Oh, how cute! They coordinated their outfits! They're both wearing yellow trousers!" I guess the game was good. Some of the commercials were awful, and some were pretty good. I especially enjoyed the one where the guy renovated the kitchen with Bud Light, the Bridgestone commercial with the beaver, the Chevy commercial where the Silverado truck keeps rescuing the kid ("I didn't even know there was a volcano in this town!") and the commercial for Detroit. Thor voted for the Party Dogs commercial.

What did you all think?

Sigh. I want to live with you.

Yum-O!
The "Lassie" Chevy commerical was cute... and so was that Bridgestone one, but the VW Darth Vadar one still rules our house! ;)

what fun - and I would pay to listen to your commentary - I'll bet its priceless......

this is my word verification

and you do feed a burrough

Dear friend... will you send me your deviled egg recipe? I've literally tried DOZENS and cannot make 'em "like Aunt Ethel does" per the Knight...

What a feast! I think it's cute your big guys liked the dinosaur nuggets.

Sounds like a pretty nice spresd you had. We had 15 guests and I watched about five minutes of the game, non of the commercials (I hate them) and none of the halftime show. But I did have a great time sitting at the bar sipping margaritas and chatting with the ladies - I'm no dummy :-).

Party dogs for sure. And what is the deal with the dino shaped chickens? That confuses me.

While you're at it, why don't you post your recipe for deviled eggs.

I want to spend the next superbowl at your house, eating.

We didn't watch, so I can't compare commercials.

Tell you what....that would work for a chick flick and an all girls day too!

the food sure looks much more interesting than the game was...yummE
Benny & Lily

Hey, I soon noticed both side were wearing yellow pants too - made it really hard to work who was in which team. Not that I understand the game at all!

Tell your lads to check out NBC this coming weekend - they'll have live coverage of the Las Vegas round of the International Rugby Sevens (7 blokes in each team and the matches are 7 minutes each half).

Yeah, I'm only about the commercials. And the food.

Well we loved the party dogs - I mean really - did you see? Beau was pouring beer! Although Darth Vader was really good. g

Sounds like a great time as had by all and I see there was no chance of going hungry! Diane

I guess you didn't have to cook dinner that night! Very impressed with Dan's quesadillas. So, how many "Marjie catering sized" bottles of ketchup and other sauces did the four lads empty?

I had been baffled by Super Bowl catering before - now I know the clock stops everytime a team has a mid-field committee meeting, so heaps of food is needed at home.

We didn't get your commercials here - and I had gone to snoozle with Zebby before the halftime (have learnt that I didn't miss much). Was stunned to find that after my nearly 2 hour nap it was all still going!

Semi lazy??? We had split pea soup with barley. It was awful.

Darth Vader was mama's favorite for sure. Also both Bridgestones [beaver; reply all] and the Chevy "Lassie." The Doritos pug who flattened the obnoxious boyfriend was ok. Liked the f/X in the car commercial ending in the Aztec pyramid complex.

Looks like a ton of good food to us. We're sure Thor got his fair share of hand feeding.

I watched it all on my lonesome, and the snacks were pretty much on the pitiful side... (corn cakes with cheese spread) so next Super Bowl, I'm coming to your house, okay?

And here is Oz, we didn't get the commercials at all! Arrgh!!