Yesterday was not only my late grandfather's 101st birthday, but also George Washington's birthday. So, as is our tradition, we celebrated by eating a typical George Washington dinner: Ham (my little guy's favorite meat) 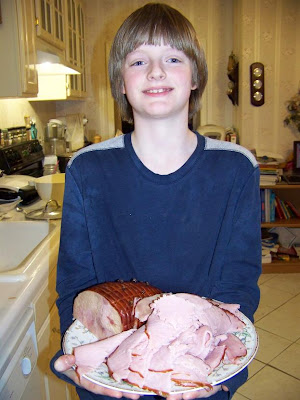 Corn Bears (which George's mother would absolutely have served, if bear shaped pans had been available back in the 1730s) 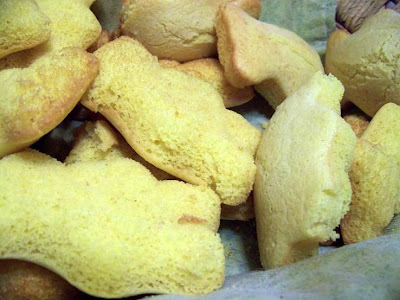 and potatoes, green beans, spinach and cake. For the guy who really invented the job, and refused to be king, holding a birthday celebration, even nearly 300 years later, seems the least we can all do!
Posted by Marjie at 3:01 PM

Love the corn bears but that ham looks fantastic as well as mouth watering :)) Diane

Mmm.. it all sounds delicious! And I would so be making corn bears tonight, if I could find the pan...

Happy Birthday George - and thank you!

I can't even imagine what it would have been like to be the first president and try to form a nation. It's this time of year when you have snow on the ground and we have the house opened up that you may miss little ole Maryville a little.

Love it - especially the corn bears.

Oh, if I'd only known I would have gassed up the Matrix and been on my way. GW is a favorite of mine, as well.

we think we are liking your tradition!
Snuggles,
Benny & Lily

I am certain George would have loved the corn bears.

The corn bears look sweet, and dangerously easy to eat a few, then a few more.......

And a glorious baked ham - fusspot Mickle only likes ham cold or at room temp (and very thinly sliced).

Sending huggles from me (sorry, the best Zeb can do is very melodic snoring), Michelle

Those are the cutest things ever!

as i have my bowl of chili for supper, i can only wish that i had a corn bear to soak up the juices. nice homage. :)

No presidents here but I'll have a corn bear anyway!