Last week, there was an article in the Wall Street Journal, which. as you all know, is my go-to for everything, about so-called ugly produce.  An enormous amount of food is wasted because it doesn't meet the cosmetic standards for retail sale, and the Journal profiled 3 companies which sell said produce directly to the consumer.  One even delivers right here in my little corner of the world!  I thought about it for a couple of days, then decided, "Why not?"

Misfit Markets has 2 sizes of organic produce box: the 10 to 12 pound and the 20 to 24 pound box.  Of course, I opted for the larger box.  And when I opened it up, this (not quite as blurry in real life) was what I saw: 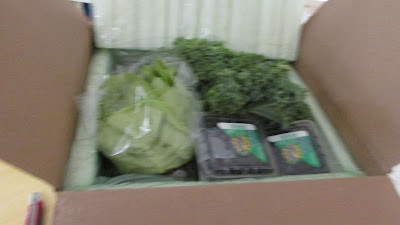 There was an enormous amount of food included in that box.  I unpacked it under the supervision of one of my daughters and my son-in-law, and with the "help" of 2 year old Nora, who didn't want me to line things up on the table to see what was there.  Still, I did manage to get it set out, and this is the bounty I received for a total of $38.99: 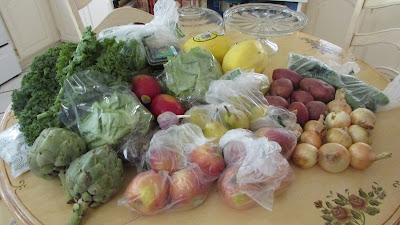 Kale, 2 kinds of lettuce, onions, potatoes, garlic, apples, pears, mango, blueberries (which I had to feed to Nora right then), peppers (which I promptly gave to Chris and Cass to remove from my house), spaghetti squash, tiny little cucumbers.....

This is considered an "ugly" pear, presumably because of the wart.  I'm not gonna lie; it was pretty delicious. 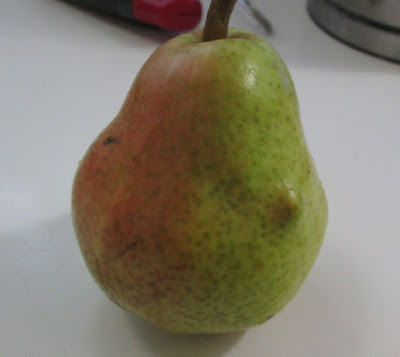 I cooked the spaghetti squash Saturday night for dinner with the hungry horde.  Patrick refused to even try it (despite his girlfriend trying to feed it to him), and everyone else liked it.  Of course I didn't take a picture!  That might mean remembering to do things when my hungry horde is milling about, with 2 starving dogs in the mix.  Overall, I'm calling this experiment a success, even though I don't quite know what to do with kale....

Happy Sunday, everyone!
Posted by Marjie at 3:48 PM

Kale is great chopped into chicken soup or added to a salad. We buy these kinds of things all the time.
Barb

Yes, kale is great for breakfast. I cook it in the pan with a bit of olive oil and then when it's wilted I squeeze some lime over it and a splash of soy sauce. Delicious.

Looks like a good selection of items in your box.

Nicely done! I don't think any of the produce looked "ugly". Kale is really tasty in soup & pasta.

That produce doesn't look ugly at all to me. How silly that people only want to buy/eat perfect produce! Do they think it will taste better? Looks like a bounty, but I'm with you, I wouldn't know what to do with Kale. I hate it cooked but maybe it would be good slightly wilted for a warm salad.