Root Veggies, But Not Imaginative

So, in the last produce box, I found beets and colorful carrots.  I've never actually cooked beets; the only ones I've ever had were the canned pickled beets.  You know the ones, packed in purple juice, that stain everything on your plate....

So I peeled and chopped 2 beets, lightly coated them with olive oil, and sprinkled with Himalayan pink salt.  Roasted at 350 in my convection oven, stirring once or twice, until they were fork tender (I don't know how long....please don't judge).  They did shrink down; the baking sheet was completely covered when they went in.

They smelled like potatoes as they were roasting, which isn't entirely a surprise, since they're root vegetables.  Beets are a little sweet, so the salt was a nice little contrast.  Ryan and Mark liked them, Patrick fed most of his to Thatcher, and Patrick's girlfriend raved about how wonderful they are.  (To be fair, since the girl eats mostly veggies, and she's very polite, I think she'd rave about them no matter how poorly I did with them.)  She also told me I could "juice" the third beet.  I did a lot of nodding and smiling for that one. 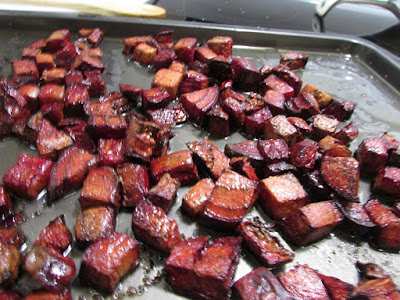 The other thing I was interested in was my colorful carrots.  I scrubbed and peeled them (one of the purple ones was actually orange in the middle; it looked really interesting), put them in a pan with a touch of salt and 1/4 cup of water, cooked off the water at medium heat (maybe 10 minutes), which was the time it took to make them fork tender, then added 1 tablespoon each butter and honey and heated until both were melted and coating the carrots.  They were not too sweet, with marvelous flavor.  Plus, all that color! 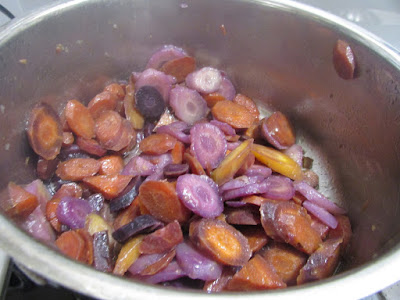 Happy weekending, everyone!
Posted by Marjie at 3:21 PM

Interesting colours! I love beetroot boiled till tender, then skinned and cut into bite size pieces served hot with a sweet and sour sauce. Very yummy. Hope all is well, Diane

I would have cooked the carrots and tossed the beets but Bev would have roasted them as well.

I like a Moroccan Grated Carrot-Beet salad from Simply Recipes - shredded carrots and beets (both raw), raisins, and honey, lemon and some spices. I'm wondering if there's a root vegetable that doesn't improve with roasting. Or grilling.

Very colorful and they look tasty too.

I love roasting beets - yours look terrific and so do those colorful carrots.

Ooh, I love roasted beets! They are especially good in a salad. Did you like them? Carrots look yummy too!