I appreciated everyone's suggestions for kale, and especially enjoyed Sue's opinion that she'd feed it to the rabbits and deer.  The only problem with that is that said critters think my yard is a smorgasbord already; I surely don't want to encourage them.

That said, I decided to go a different route and cook it up to go with our fish on Monday.

Heat the olive oil in a skillet or large saucepan.  Peel and coarsely chop the garlic (hey - I have the bulbs of fresh garlic; why not use them, despite the fact that the pre-chopped is easier to use?), and saute at medium heat until softened.  Cut the ribs out of the kale, and chop it into 1" to 2" pieces.  Add the kale to the skillet with a touch of salt - whatever amount you like - and cook, stirring occasionally, for about 5 minutes, until it's bright green and soft.  Squeeze half a lemon over it, or the garlic will be overpowering. 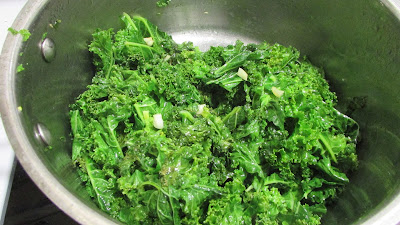 Ryan said it was fine, but not as good as spinach, while Patrick vehemently disagreed and said it was much better than spinach.  Go figure; the man who wouldn't even try spaghetti squash really liked the kale.  The world is a confusing place. 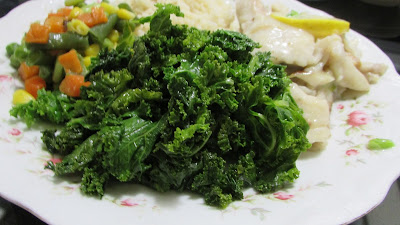 So, having baked the spaghetti squash, steamed the artichokes and sauteed the kale, along with enjoying the requisite salads and really loving the fruit, I'm eagerly awaiting my next "ugly produce" box at the end of the week.  And it might even inspire me to remember to take pictures of food!

Happy Wednesday, everyone!
Posted by Marjie at 12:09 PM

Yay!!! I am so glad the boys tried it and that Patrick really liked it. Lemon and garlic are always so great with greens. Looking forward to seeing all the yummy food you create with the weekly boxes.

Oh yes another great way to eat it. We love endives with fish and the kale is similar but less bitter. Can't lose with olive oil, lemon and garlic can you!

Wow! It would take us forever to finish that box off. Only two of us and only one of us would try all of it. My husband would eat the kale but only if I made Portugese Kale soup -- I think he loves the linguica most and the kale is just background music but he eats it nonetheless. Your version looks delicious.

I wish we had something like your ugly produce box here! What a great assortment! You can also grill kale (super fast - right after your done grilling everything else.)