When I attended Sew Camp last September, I bought bundles of fabric, and organized them by color.  It seemed like a good idea at the time: sew in a color family, get coordinating garments, be happy.  Oh, and one other rule: I must sew everything in one bag before I can progress to another.  Otherwise, I'll just sew fabrics I love, and never get a chance to enjoy everything else.

So, in January, I decided to sew the brown bundle.  Specifically, I decided on this bundle because there was a piece of brown with white polka dots that I really wanted to sew.  Of course, it was a very lightweight fabric, completely inappropriate for single digit temperatures, made doubly so because there was only enough for a sleeveless summer dress. 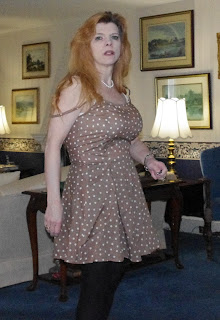 Oh, well.  I made the brown polka dot dress first, using a pattern I made from a dress I bought years ago, and wore out because I loved it so well.  I've tried it on, but it's definitely waiting for warm weather.

Then I made a skirt and jacket set.  I bought some white satin for the lining, and brown gimp for trim on the jacket.  The skirt is a simple, straight skirt.  I've forgotten which pattern I used, but it doesn't matter; it's a classic design, without a waistband.  Center back invisible 9" long zipper.  I didn't have a pattern for the jacket; I just "winged" it, based on a picture I saw in a magazine or advertisement or something.  I don't remember.  I figured I could wear it with its skirt, or with the polka dot dress to extend the season into earlier spring or later in the fall. 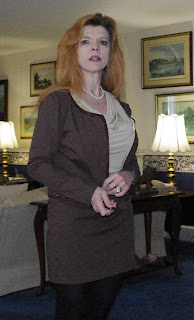 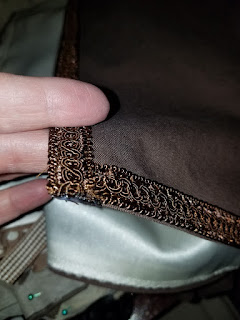 I made a top from a piece of light beige knit fabric I had, using a McCall's pattern.  Draped neck, flutter sleeves, long.  It's a useful pattern in that it has a longer option to make a dress. 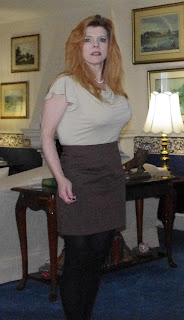 I also made a brown dress from a 1990s era pattern I have.  I liked the dress, was indifferent to the color, but it wrinkled terribly while in the laundry and was a bear to iron.  I had to use sprayed water to get out the wrinkles, because even a steam iron wouldn't fix the problem.  I wore it once, then dropped it in the donation box. 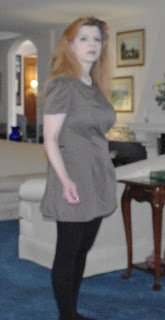 Lastly, because I had just finished the brown wardrobe, I sewed up a tulip skirt from a piece of brown fabric gifted to me by GMarie.  Sadly, I think I'm fatter than I am, so it's 2 or 3 inches too large in the waist, with no easy fix, since it has a side zipper.  I solved the problem by wearing it with my beige top pulled out, and a belt worn around the waist.  I wore a brown belt one time, a beige one another time.  I'm not sure which I like better, but I'm leaning toward brown. 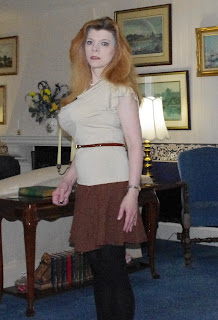 So, that's January's brown wardrobe.  I'm not that big a fan of brown, but I do like everything I made except the dress that wouldn't stay unwrinkled.

Happy Memorial Day, everyone.  Remember to honor those who have fallen, and to love your family and enjoy the day of rest guarded for us by those who protect us.
Posted by Marjie at 3:01 PM

Nice work sewing up the brown bag. I want to know, were all those fabrics in the same bundle, or did you reorganize by color? g

You are amazing! I think they are all adorable but it's too bad the one dress wouldn't stay unwrinkled. I think the brown belt looks great with the last skirt and blouse.