So, let's say you're a dummy and leave a container of sour cream at the very back of the fridge on the top shelf, and it freezes.  So you move it to the front to thaw, and 24 hours later it's pretty watery.

And, let's say the kids are coming to visit, so you order half a case of bananas from your restaurant supply house.  Hey, the case is 40 pounds, so that's only 20 pounds of bananas.  Easy peasy, right?

So, you decide to make banana bread, using the watery sour cream in lieu of liquids and fats.  I won't even bother trying to remember the recipe, because I hope none of you are dumb enough to freeze your sour cream.  But it largely disappeared. 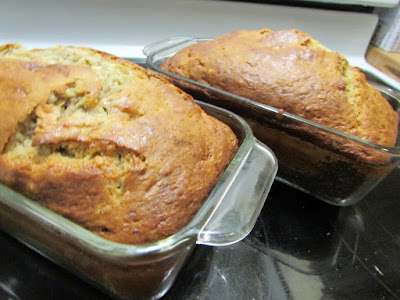 And since my son in law was running an Iron Man Triathlon that Sunday, not too far from here, he was very appreciative of the fact that I'd made him some "excellent" carbs for "carb-loading".

And, what if your daughter had called to get the recipe for The Best Pie Crust Ever, and said son in law made a strawberry rhubarb pie to bring up for the family? 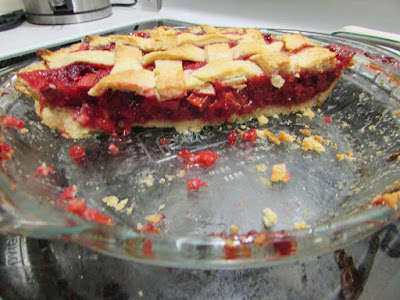 (This picture was taken after he'd served it for dessert, of course.)

Well, then you'd just have to whip up some cream to go with it, and tell your daughter she's one lucky lady, having a husband who is quite competent in the kitchen!

Happy Tuesday, everyone!
Posted by Marjie at 3:18 PM

You have a lovely blog. I absolutely love banana bread. Your header is beautiful. :)

The thawed out, watery sour cream sounds like a perfect ingredient - yum!

Not something I make a habit of, but it has happened to me in the second fridge which is out in the garage and I forget to check it so often!!! It also has a habit of freezing things I don't expect it to. I often end up cooking funny frozen veggies that should never have frozen - so let' say......... Sounds like the bananas solved the problem very well :-)) Take care Diane

I think the sour cream incident was a blessing in disguise because that banana bread looks amazing! Love that your daughter's husband made a pie.

your daughter is lucky indeed! i'd probably die of surprise if my husband baked a pie...sometimes i think he doesn't even know how to turn on the oven. :)