Garden Tuesday on Wednesday, Sort of.

So, a few weeks back, we learned that no one has bothered to get my mother in law's name put on the in-laws' headstone, despite the fact that she died over a year ago.  I have ordered that problem rectified, because evidently my husband is the only of her children who thinks her grave should be marked.

That caused us to look into his grandparents' headstone, because one of his brothers visited the cemetery where they're buried about 25 years ago, and brought us pictures of many headstones, but not theirs. So, he called that brother, who just happened to be going to New Hampshire, and stopped by the cemetery in Monson to look for that gravestone.  It does exist, but my dearly beloved thinks that stone is small and weaseley, so I'm looking into getting it replaced, as well. 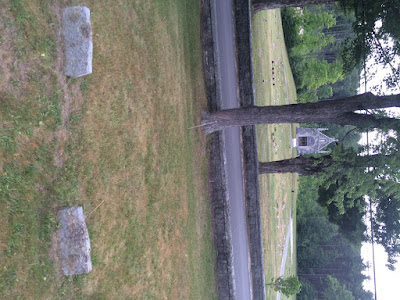 (I don't know why some pictures insist on orienting themselves sideways.  Just pretend it looks right.)

And look what BIL found.  I know these markers to indicate the 8 year old and 3 month old daughters of a different relative; both have been dead 80 to 90 years.  And the sad thing is that I don't think anyone knows of the existence of these girls except me, because BIL had to clear dirt off the stones to photograph them for me.  And he had no idea what they meant; he said they looked like surveyors' monuments to him. 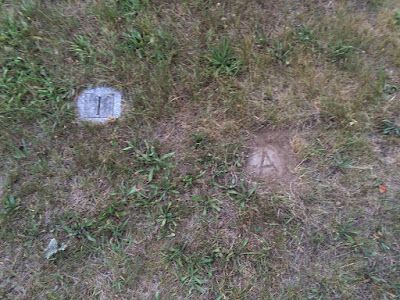 So, I'm thinking of having the current gravestone for my grandparents-in-law (now dead 38 and 55 years) refaced, and carved for these babies.  Someone ought to remember them, after all.

OK, not your typical Garden Tuesday.  But it's what I've been chasing for the better part of a week, and it beats pictures of 3" of rain.

I LOVE that you are doing this...everybody deserves to be remembered!!!

Kudos to you it is important. Yikes young kids. Sad
Lily & Edward

My grandparents had a baby that died after only a few hours. At the time they couldn't afford a marker for his grave. A few years ago I located his grave and had a marker carved and set for him. I don't know why my grandparents or one of their other children didn't do it but I felt he should have a marker.

I think it's great that you are doing this!! And yes, I think you would really like Valley of the Moon.

A most excellent Garden Tuesday, I'd say.

Something that I need to get done as well. Because I am not in the UK now it has slowed things up a bit but I must get my Mum's done. The cemetery though charges extra fees for it which sounds a bit odd to me!! Hope all is well Diane