About 2 months ago, Kellie announced that she and her boyfriend were driving up to vacation for a week on April 15th, and everyone should be here to visit with them.  So the sisters and Jeff came up, with their dogs, and the house was fuller, loud and happy.  We first met her boyfriend at Shannon's wedding, and we thought he was a very nice man.  I mean, he and Chris (Shannon's husband) went to watch Mark (or mostly his teammates) play football the Thursday before the wedding; it's a really nice guy who wants to go watch his girlfriend's baby brother play high school football for a team he doesn't know or care about, right? (The team made it to the state playoffs, which is truly remarkable for a private school with only 800 students, and lost in the quarter-finals.)

So, Friday night, Wes explained to us that he and Kellie have been dating for 2 years (which we knew), and that he had spent a year trying to get her attention, finally succeeding when she was promoted into management, and he dressed up better than the other guys, raced to open doors for her and seated himself next to her.  He also said that on their first date, he knew that she was the girl she would marry.  You know what came next: permission from the parents.

So, on Saturday afternoon, he took her for a walk, and secretly asked us all to wait for them out front, with cameras.  And you know what happened. 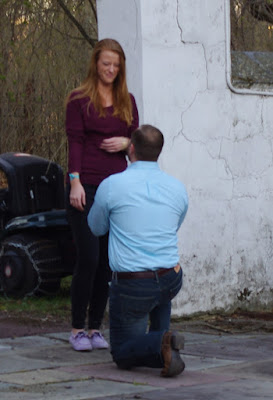 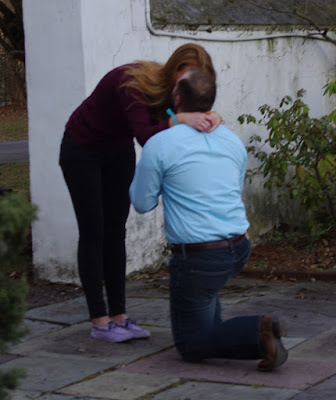 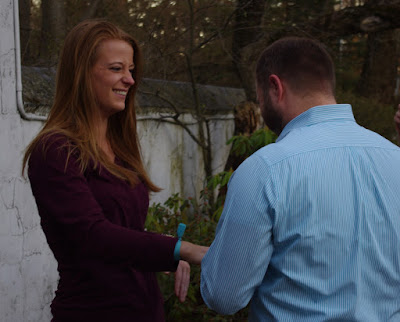 The pictures tell the story. 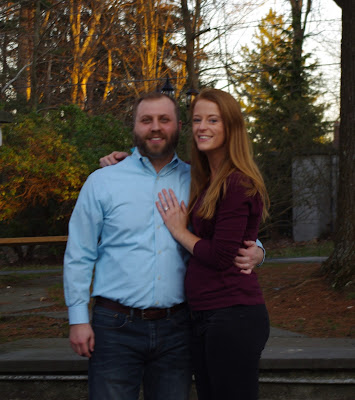 How EXCITING!! Congratulations! I love a romantic guy!!

Beautiful! Looks like he is a keeper! So much happiness going on in your family right now, I love that.

What an exciting week-end! My very best to them!

He's a lucky man - He got the girl and her entire family - I think this has the makings of a wonderful movie. Congratulations lady you have a full boat going on. Life is good.

She said yes!! Will there be another wedding at your house? So exciting. g

Awe gee, how romantic:) Congratulations to all of you!!! Your family just keeps on growing, Marjie, lol...Yippee! Another wedding in the future!!!

Awww, so sweet... congratulations to all!

The family just keeps growing. - Good thing she said yes in front of everyone.

How neat to include the family. Congrats to the happy couple and we're looking forward to more wedding pics.