It's been a hectic weekend.  Our oldest son and his wife came for the weekend, the sons went to the first part of the bachelor weekend (paintballing, skipping the casino), I sewed two-and-a-half test dresses in search of the right pattern for my mother-of-the-bride dress, and a big contact lens problem at 6:30AM today has me seeing blurry.

So I'm hiding.  And I thought I'd write a review of a book I read probably 2 months ago. 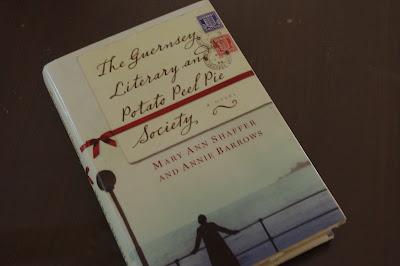 I bought this book at a used book sale in April, and it waited for a couple of months for my attention.  "Literary" and "Pie" in the title?  It had to be good, right?  The book is set in the aftermath of WWII, in London and on Guernsey.  Juliet Ashton is an author attempting to begin her second novel, when she receives a letter from the Isle of Guernsey.  Her name had been written inside a book, and the writer wanted to know if she could recommend a book for him.  Thus began a correspondence between Juliet and the members of the Guernsey Literary and Potato Peel Pie Society, so named when some of the members were caught breaking the Nazi imposed curfew during the war.

The book consists entirely of letters between Juliet and others: her publisher, her best friend, members of the Society...

I had to stick with it through the first quarter or so of this book, until I became caught up enough in the story to want to see it through, to find out what happened to the member who was taken by the SS, what happened to the father of that woman's child, what would become of the marriage proposal Juliet received from a rich man, how those on Guernsey fared after the war.  I'm just not a fan of reading nothing but letters between people and waiting to see how they are interrelated and interwoven.  Ultimately, it was a good book, but I would have enjoyed it much more had it been a more standard narrative.  3.5/5

Happy Labor Day, everyone!
Posted by Marjie at 5:38 PM

I agree. I don't enjoy letter books, though I have read a couple that were excellent.

I'm ok with books that have intermittent letter exchanges, but only as a piece of the narrative pie.

I bet you are so busy getting ready for the upcoming wedding! Can't wait to see your dress & the photos of the wedding.

I am not a fan of letter books either, although this one does sound interesting.