One Last Brutus on Thorsday

I had planned to post this today, but had hoped for another picture.

Mark started high school this week. It's a Jesuit high school, and so his uniform is a suit.  Last week, there were two Freshman orientation days: one, an afternoon picnic, and the other a day for the new students to learn their way around the school, attend a short intro to the classes, meet the teachers, have lunch, student ID photos taken, etc.  Of course, he had to wear his suit that day.

Equally obviously, Baby Brutus noticed that Mark left without him.  So when Mark got home, Brutus raced up to him in greeting.  Mark scurried to the laundry room to change out of his school clothes, and into his play clothes (expressions that no one under 50 has even heard).  Brutus laid outside the door, patiently waiting for him, not understanding why anyone wouldn't want dog hair on his suit. 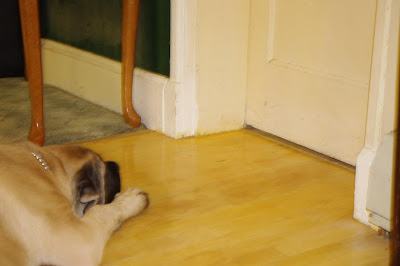 And then Mark had to spend quite a while sitting on the floor, hugging his puppy, reassuring Baby Brutus that he will always return home. 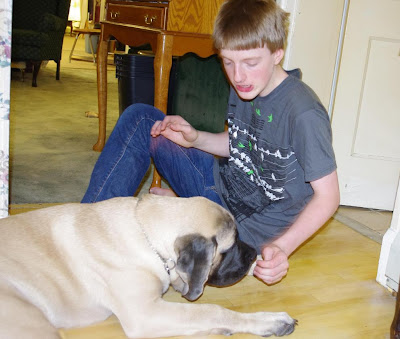 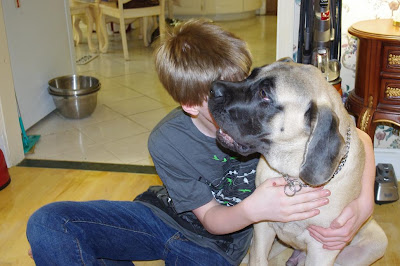 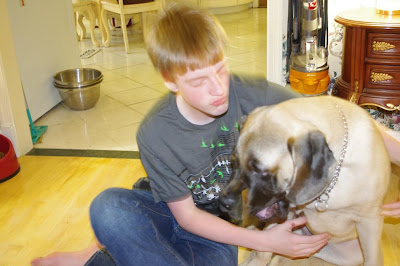 I was too slow with the camera to get a picture of Mark in his suit being chased by Baby Brutus.  And I didn't worry, because there would be another 178 days in which to get that picture.

It's not fair that the next school day never came for Baby Brutus.

Email ThisBlogThis!Share to TwitterShare to FacebookShare to Pinterest
Labels: Brutus, Dogs on Thursday

It is breaking my heart.

That is so sad!

Hugs to all of you. This is so sad.

Love ya lots♥
Mitch and Molly

But I'm under 50 and had to change out of my school clothes into play clothes... ;)

I don't know what's wrong with my blogroll, as it didn't alert me you had a new post. Because I wanted to tell you at the earliest opportunity that my thoughts have been with you and you and your family all week.

Your photos and words on Last Brutus Thorsday are lovely, funny, wise, and heartbreaking.

Oh how well I remember the days of the mad dash from car to bedroom to avoid getting mastiff slobber on my work clothes. Baby Brutus sure missed his boy. I'm glad you posted this. He was a happy puppy.

I hope my story made things a little easier. Thinking of ya'll.

Sending love to you and your family!!

Oh this breaks my heart. I know all to well how you feel and I'm sorry you are feeling it. g

reading your posts from the top, got me all puzzled about this until I finally reached the sad news of Brutus' farewell... so sad.. not fair..

This made me so sad. We're very sorry that Brutus couldn't stay and grow old with you.