Well, there is a lot of veggie inclusion going around in my little corner of the world.  Today I bring you 2 dishes, neither of which was all that spectacular on its own, but which were actually excellent.

Slice the zucchini into thin, bite sized slices.  Cut the grape tomatoes in half.  Heat the olive oil in a large saucepan or small skillet, then add the garlic and cook until softened.  Stir in the tomatoes and zucchini slices, then cook, stirring occasionally, until they are fork tender (or as soft as you'd like them).  Add salt to taste, and plenty of pepper.  Even Thatcher approves of this.  OK, he's a dog, and as such, he approves of just about any food you'll share with him.  Still.... 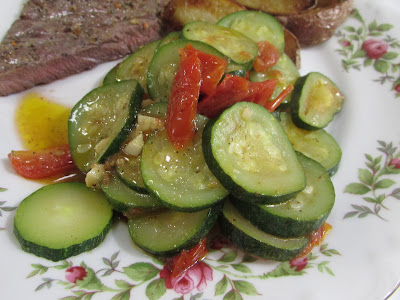 Put the rice, water and salt in a pan and cook in the usual way.
When the rice is about half done, melt the butter in a saucepan and cook the onion for a minute or 2, until softened (this gets rid of any harsh flavor the onion might add to the other veggies), add the zucchini, summer squash and carrot, and cook for about 5 minutes.  Add the kale, and cook until wilted.   Remove from the heat, and stir into the rice as it's almost finished cooking. 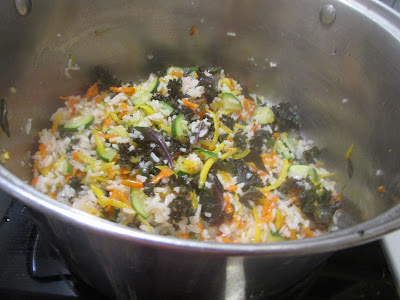 Clearly, I served this with roasted beets and steak, although I can't say I have a clear memory of that. 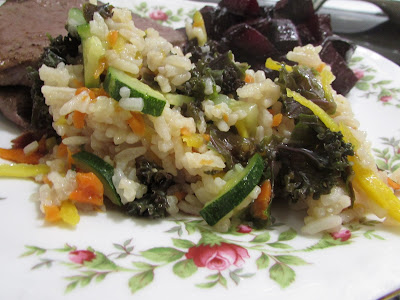 This is a good way to add veggies to an otherwise boring starch.  Don't get me wrong, I like boring; that's how I've always operated.  But some folks (like my sons) don't.

Happy Monday, everyone!
Posted by Marjie at 4:32 PM

Email ThisBlogThis!Share to TwitterShare to FacebookShare to Pinterest
Labels: side dishes, veggies

YUM! I think both dishes look and sound excellent.

Sounds good to me, I think we are going to have a lot of zucchinis any moment looking at the plants. Enjoy your day, and take care, Diane