The Worst Birthday Yet.

Let me start by saying that we are all fine.  And I'm trying to face this with humor.   And Jeffrey sent me flowers for my birthday. 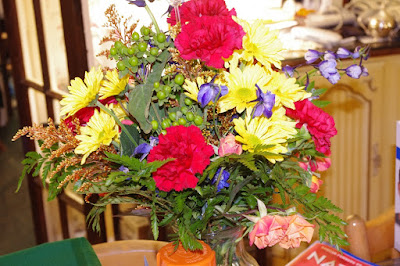 Last Friday night/Saturday morning, about 45 minutes after Ryan and Mark went to bed, they heard noises in the attic, as if someone were throwing things around.  And then they smelled smoke.

I ordered the boys outside, walked to the phone, called 911, gathered my purse, keys and lockbox (why lose the house deed and birth certificates?), and coats for everyone.  Within 4 minutes, our cop was on the scene (we only have 3 cops in town, so we think of them as "ours"), 5 minutes later the first ladder truck arrived, and the party started.  All told, we had 8 companies, one ladder truck with a 5" line, 3 running 3" lines, and about 50 people.

We lost part of the attic. 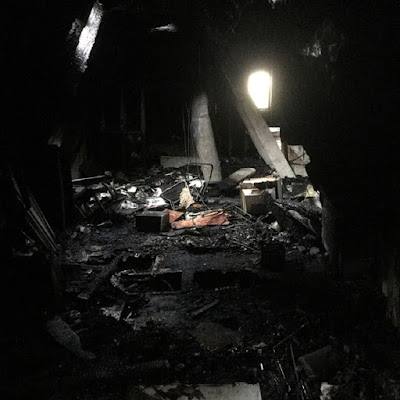 The fire fighters moved most of our things out of the line of fire and water.  They tarped what they couldn't move.  There are 3 bedrooms upstairs which look like this: 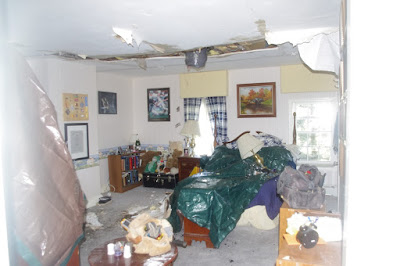 The ground floor is half soaked and blackened; the rest is clean.  There's a lot of extra stuff in the room where my daughter was married just 3 weeks earlier.  Stuff I don't have to replace.  Score one for us good guys. 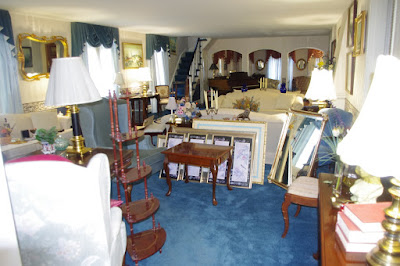 We have a seasonally appropriate "Haunted House" look. 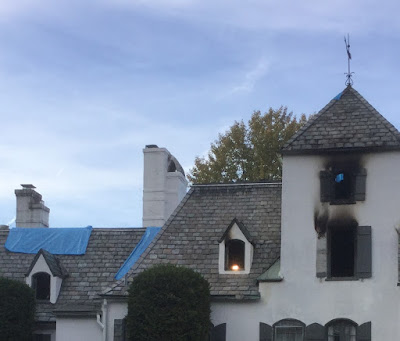 The things we lost in the fire are corralled in a seasonally appropriately colored dumpster. 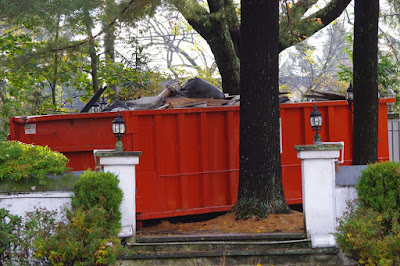 Some surprises came from the attic, like these people from our Christmas train set.  They will be scattered around in the playroom for decoration, as a reminder of what we could have lost. 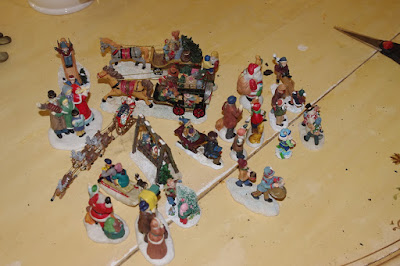 I spent last Saturday and Sunday cleaning my kitchen, sweeping away the 2" of standing water, throwing away that which got soaked, cleaning all of my surfaces a hundred times each (gotta love those disposable wipes; I've used about a case of them), laundering dish towels and cloths dozens of times, and getting ready to feed us.  One of our neighbors brought us coffee and donuts at 9AM Saturday; another brought us dinner late Saturday afternoon.  I was very touched.

My dearly beloved already had a demolition crew arranged to start on Monday morning; they put the tarps on the roof (keeping out the 3" of rain we got Wednesday), and they have the attic cleared, the undamaged section cleaned and repainted, and we are ready for the framing crew to come in and start next Monday.

So I'll only be around sporadically.  But please know that we are all a little shaken, but physically just fine, and recovering.  The things we lost in the fire?  Not much.  The things which were saved from the fire?  Priceless.
Posted by Marjie at 3:54 PM

Oh my!!! So sorry this happened to you. So very happy you are all fine.
Something like this can be so terrifying. Your community certainly is very supportive.
Wishing you all the best while things get back to normal.

Oh my Marjie, what terrible news but good that it wasn't worse and that no one was injured. Any idea what caused it. This is always my worst nightmare, especially when we are traveling. Best wishes and hope the recovery is speedy.

You can rebuild a beautiful house, but you can't rebuild beautiful people. I'm so sorry about your home, but so glad you're all safe. You write about this with such pragmatism and humor, one could almost forget or miss how devastating this must feel. But you've already flipped this into a project, cut the coat to the cloth -- this is what we have, and this is what we have to do.

hello marjie its dennis the vizsla dog hay fire is verry skarry i am glad it wuz not wurse!!! we send lots of tail wags yore way!!! ok bye

OH Marjie! so glad that the important possessions are all unscathed. Sending hugs...

How truly terrifying. Glad you are all safe. Love the Christmas train set people that were saved. Really enjoyed chatting with you the other day. Be well stay safe. g

You have great emergency services. They made a GREAT stop and did solid customer service with the "protect in place" tarps and such. I'm glad you're okay and that your local fire departments are more than capable.

How frightening for you all. How wonderful that you are all safe and well. God give you strength for the next while cleaning and clearingafter a fire is such hard work.

Good to read you are all safe and doing fine. Take care all is well with you and your family

I am so sorry this happened to you.

So scary - fire is one of my worst fears. Glad you caught it quickly and were able to save most everything. Any idea of the cause?

egad! you seem to be keeping your attitude as positive as possible, and i'm not sure i could do the same. so glad no one was hurt!

Oh my goodness what a scary thing to happen and I can imagine just how shaken you must have been. Thanks goodness you are all OK. It was strange I was only thinking the other day if we had a fire it would not be easy to get out of our bedroom. The only door leads into the barn and the barn is always locked! I am off to tie a key to the inside right now in the hopes we will never need it in and emergency. Take care and I hope everything gets sorted easily Diane

After all that I forgot to wish you a belated happy birthday. Diane

Oh Marjie! I have goosebumps reading this post. I am so THANKFUL you are all okay! I am very sorry that your beloved home was damaged by fire but I am so happy to hear that most of your belongings are safe, and more importantly, that none of you were hurt. Sending big hugs & love your way!!! xoxo

I'll bet the reconstruction is a daily nightmare. Trucks, saws, jackhammers, every waking hour. Thinking of you, not that that helps.

Good lord Marjie, I'm sorry this happened and I'm so glad you're all ok ! I know how terrifying it is but as long as everyone is safe, the house can be fixed. What a great emergency group you have. Taking care to tarp your stuff is a big deal. Seems a little odd to say Happy Birthday, but Happy Birthday *hugs*

I'm hoping that things are getting better each day. Do you live with the smell of smoke permeating everything? We're thinking about you and that wonderful old house and hope that life goes back to normal soon.

This is terrible news Marjie and on your birthday too!!!! Thank God everyone is okay and the damages can be mended. Whew!

Sounds like your neighborhood safety teams went above and beyond! I bet you'll be baking them a surprise when all is said and done:)

Wishing lots of LOVE to you and yours,

P.S. Yes I'm back from vaca. Will be posting soon:)

I am so glad that you and your family are all OK. What a scary experience.
Sounds like your firefighters did the best they could to limit damage to your home.
Hopefully all will be tip top soon.

How horrifying for you! We're glad to hear that you're all okay.

Love ya lots♥
Mitch and Molly

Thinking about you and your family, Marjie. I hope things are getting back to normal for you all. Sending love & hugs your way!!! xoxo

Oh my gosh!! I was away from blogging for about a month and totally missed this!! I'm so glad you are all okay!

Oh wow am I ever behind. I haven't even scrolled back yet to your daughter's wedding. I'm SO, so sorry for this terrible happening but happy to read today that you're slowly getting back to normal. It's amazing how much stuff we think is important really isn't. All of your important "stuff" is still there to give you hugs and support. Family is the best! Happy New Year to you and yours.