I read this book in the spring and summer.  But life's been hectic, and since Brutus has entered our lives, I have him for Thorsdays.  This is the first time in a while I've had a few minutes for a book review.

TO SERVE THEM ALL MY DAYS
By R. F. Delderfield 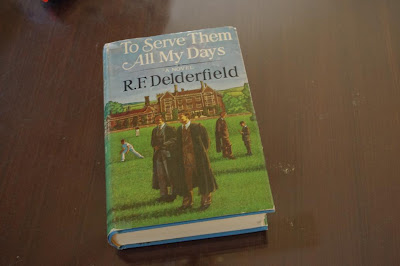 Probably a long, long time ago I added the miniseries by the same name to my Netflix queue.  In April, the first DVD arrived; after watching the first episode, I realized that I had the book sitting right in my library, having been purchased at a used book sale some years ago.  So, off I trotted to fetch the book and begin reading it.

This is the story of David Powlett-Jones, a Welchman just returned from The Great War.  Having been released from active service due to shell shock, he was sent to apply for a job teaching history at a boys' school.  He accepted the job, intending to see how it went before deciding to stay on.  This is the story of his life at Bamfyld, about his dealings with the boys and the other teachers, about his friendship with the head master, about his marriage to Beth, and their twins.  There is joy and tragedy in this book.  It is a very long book; my copy is in excess of 600 pages of small type.  It feels rather like Downton Abbey, in that events unfold over a long time, and the reader gets to know a great many characters, albeit all from David's point of view.  Sometimes, there are humorously made, but very true points.  The second headmaster under whom David worked, and with whom no one got along, died suddenly in the book, and David's friend and fellow teacher Howarth growled, "That's that, and I hope to God nobody asks me to comment.  If there's one form of hypocrisy I can't tolerate it's sentimental regard for the dead, simply because they are dead.  To hear some people talk at a funeral one would suppose dying was limited to the chosen few."  This book spans the time from late in World War I to the outbreak of World War II.  It was a very pleasant read.  4/5 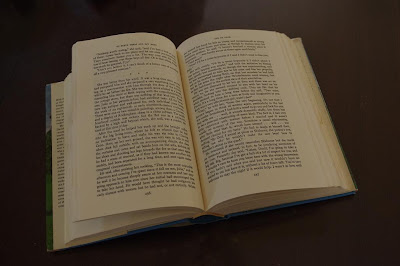 Sounds interesting. I really enjoyed Downton Abby - although I watched it, not sure it's a book or not. Very interesting and true comment about the dead. g

Will look it up, sounds interesting. Have a good weekend Diane

Sounds like something I am in the mood for right now!

Marjie, this is one of my favourite books. I saw the TV series umpty-something years ago and bought the book a year or so later. A paperback, my copy now looks "well loved" as I re-read it every few years!

I'll add it to my too long list. The title is quite familiar to me though... and I don't know why. I wonder if my grandmother insisted I should read it?

For some reason I think I've read that book but I love long books with fine print that I can get lost in for days. I may look it up again.

It sounds like a great read! I love Downton Abbey so I have a feeling this book is a good fit for me.

Aha I've read that one ! Mom's bookcase was chock full of old hard covers. There were a few Delderfields, but my favorites were by Chaim Potok.