A couple of weeks ago, Ryan was complaining that desserts were boring.  The poor guy; he was being made to endure cakes, and brownies, and sometimes blueberry muffins or cranberry bread.  Some might say he's spoiled, but, trust me, he assures me that boring desserts are torturous.

So, one evening, the boys went to the supermarket for milk, and returned with a Jello dessert cookbook in hand.  Naturally, they were demanding "interesting" desserts.  Now would be good, thank you.  A good mother would comply, and I did.

In a fairly large bowl, stir the gelatine into the boiling water, and stir until completely dissolved.  Add the ice, stir until soft set, remove the remaining ice chunks, and put in the refrigerator to cool.  Slice the strawberries, and divide them among 4 to 6 dessert glasses.  Whip the cream with about 1 tsp vanilla extract and 1/4 cup sugar, then add half of the gelatine, and whip until smooth.  Put 2 to 3 tablespoons of the remaining jello in each glass, over the strawberries, then add the whipped cream mixture, dividing evenly among the glasses.  Divide the remaining plain jello between the glasses (there should be about 1 tablespoon per serving), putting it right into the top center of the whipped cream mixture.  If desired, top with another strawberry (I didn't have any more).  Chill for an hour or 2, if you have time, then serve with whipped cream. 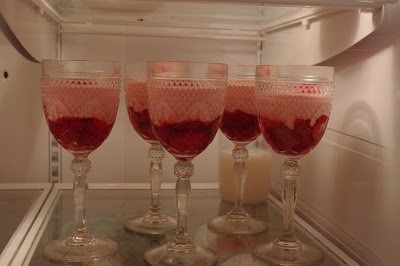 The original recipe called for Cool Whip, but I don't use that.  And I am pretty sure that I changed up the fruit requirements, but I don't exactly remember.  Still, it was good, and I'm certain it will be demanded, I mean, requested, again soon. 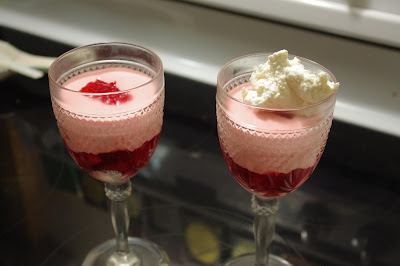 Hope you all have a great weekend! 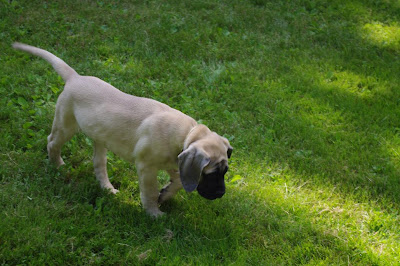 Email ThisBlogThis!Share to TwitterShare to FacebookShare to Pinterest
Labels: dessert

Oh if they only new they were enjoying "retro" comfort food:) Good Mommy, Marjie...

Marion "requests" Jell-O at least once a week:) I'm not as good about complying. Have a wonderful weekend!

this is such a lovely color! i hope ryan was satisfied. :)

Very festive and you can make use of whatever fruit is in season and available.

The Knight would love that. I don't eat jello... it's a texture thing.

It looks so pretty in those glasses.

Now is always as good a time as any and better than most.

You are such a good mom! My kids would dig this dessert.

Sounds perfect for a nasty, hot day like today!

I'm almost done with your sussy!