I didn't sew at all during June. I decided I needed to clean out and reorganize my closets and dressers (yes, plural, because what husband wouldn't want to sacrifice closet and drawer space for his wife?).

So, on the Fourth of July weekend, I was ready to go. I had bought this pattern, and really wanted a pink dress from it. 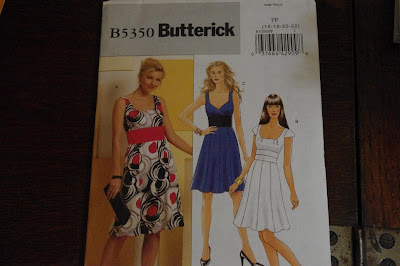 But, being a little afraid, I first tried it in this white eyelet I bought last year. The eyelet was a great bargain, 14 yards for about $25 (and I had always wanted white eyelet dresses). Of course, I have so much left over that it can be used as a trial run for just about anything. My dearly beloved hated it. Truth be told, I am not wild about the center front seam in the skirt, which doesn't really show in this picture. But I'll probably never wear it. 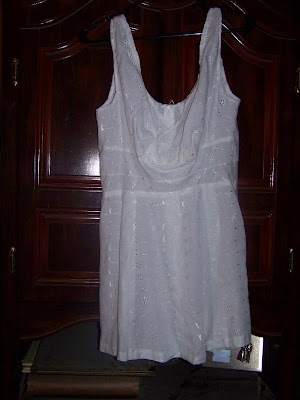 Then, I had bought McCalls M6078 top pattern, and was really excited to try it. This top is actually a hunter green, but the flash washed it out. Sadly, hubby hated this, too, because the fabric is fairly heavy, so the drape of the neck isn't that pronounced. 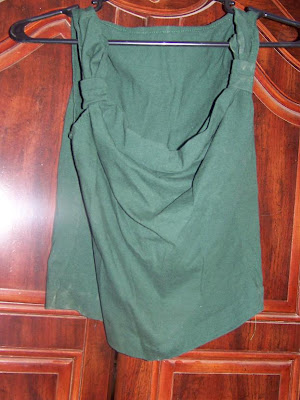 So I made this pink and white striped cami from a pattern I first tried in April. At last, something I could wear (and could zip out in an hour). 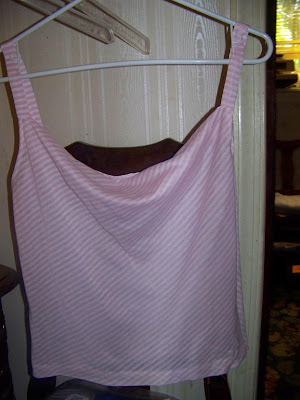 Then I made another, from identical fabric that had a blue and white stripe. At last, I was feeling better, with two successes for the weekend in my closet. 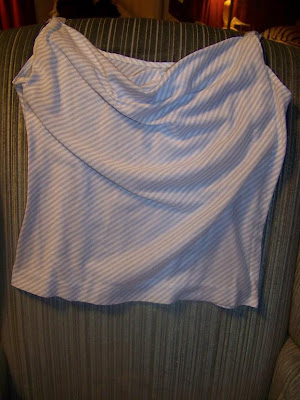 So, back to the McCalls, with this white stretchy rayon knit. I liked it pretty well, and wore it with a red skirt, blue shoes and my blue shawl. It was 4th of July, after all! Of course, I forgot to take pictures. 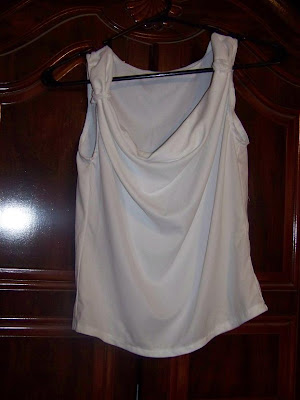 Then, I cut this dress and jacket combo out of the pink windowpane fabric I'd wanted to use with Butterick B5350. I just loved the fabric too much to risk a dress I wasn't sure I loved. And I decided to make a little shrug from the same fabric. I've made this jacket in the winter, always lined. 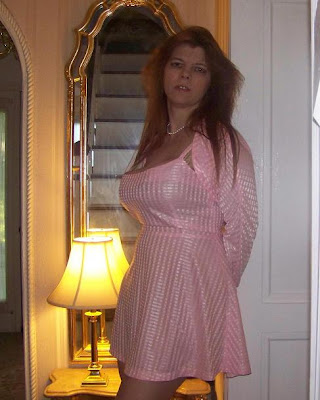 I didn't line this one; instead, I finished the raw edges with seam binding, then stitched or blind hemmed it in place. I think this is called the "Hong Kong Finish", and that's what I'm going with, because it sounds so fancy and all. I wore this to the eye doctor's office, and garnered several compliments. That's always nice. 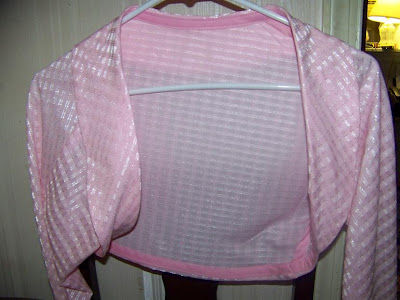 Although I ordered 3 yards of this fabric from Fabric Mart, I got very close to 4 yards. So there's enough pink left for another sleeveless dress. Maybe this weekend or next I'll make a princess seamed dress from a pattern I know, love, and use often for knit dresses. And at least I got something out of my weekend's work!
Posted by Marjie at 12:25 PM

Love that pink dress, a colour that has always been a favourite of mine. One day I may get my sewing room finished then I can get back to sewing and painting!
Re going to bed times. As I get up at around 5am in the morning, I would never manage your hours of going to bed at 3 to 5 am!!! Working in racing stables for many years I used to get up at 03h30 to 04h00 and it seems to be now in my blood!! Diane

Yay for the successes! That pink fabric you used for the dress and shrug is super cute. You turned it into a very fun ensemble.

White eyelet is my very favorite kind of fabric, it's too bad you're dress didn't work. Love all the tops and the pink dress!

Impressive. And honestly, it does my shopper's heart good to know that seamstresses have strike-outs too.

Love that pink fabric. Maybe I don't sew any longer because it would kill me to take all that time to make something and then not like it.

Very nice! I love the pink dress. It's hard to tell about the white eyelett with it on a hanger. However, try it again, this time, cut that center front skirt panel on the fold. That's what I do with my KS skirt pattern. If there's a little flare at the center front, just get rid of it. You'll love it much, much better. :) And if not and you trace patterns, feel free to send it West! g

When you get busy, you REALLY get busy! Love, love, love the pink dress with the jacket. The fabric is gorgeous and the dress looks fabulous on you. I bet your sweetheart is giving up closets left and right!

Look at all those new items - very nice!

I had a dream last night about making a dress, so I guess it's tie to get reacquainted with my sewing machine. I think you and G have inspired me.

Your sewing skills never cease to amaze me.

Beautiful as always you and your dresses! Pam (For The Love of Cooking) and I were talking the other day and she said you had not worn pants since 1985 or something? Awesome! I am a fan of skirts myself, so comfy!

The pink windowpane has made up beautifully - the cut, line and drape are soo good.

Please don't give up on the pattern you used for the green top because I'm convinced it will look great made in a softer fabric.

(Yes, I can sew and used to make nearly all my own clothes. I just haven't much for the last 20 odd years (during which time my shape and size have changed drastically). I'm very impressed with your work with knit and/or stretchy fabrics)

Huggles and puRRRRRRumbles from us downunder

You look so pretty in pink!

Ooh, I always love your dressmaking posts - I just so admire your ability to sew & make dresses yourself!! And I LOVE that pink dress - the colour is gorgeous on you!! Gosh, if we lived closer, I think I'd be coming to commission you to make dresses for me all the time - tee! hee!