After reading Sue's post yesterday about the buffalo who have taken up residence near her house, I realized I'd never posted any pictures from the Terry Bison Ranch at the south side of Cheyenne, Wyoming. It's a great place. It's been in existence since the 1890s, when it extended west almost to Laramie (about 40 miles), east almost to Nebraska (about 100 miles), north and south about 100 miles each. Today the western boundary is I-25 North/South, east about 30 miles, north about 5 miles, and south about 10 miles from where the pictures were taken. 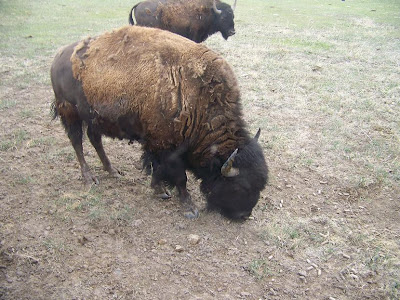 The up close and personal buffalo here are what they call the "Show Herd" of animals that are more docile than most. Truly, you should avoid buffalo; they are very irritable animals, and extraordinarily powerful. The ranch herds them with Suburbans instead of horses to minimize danger to the people and horses. The buffalo have been know to charge the 4WD vehicles and knock them over - one on one. They can only be kept penned by use of high tensile strength barbed wire; they will walk through any other kind of fence.

Since they were shedding their winter coats, they really looked quite disreputable. 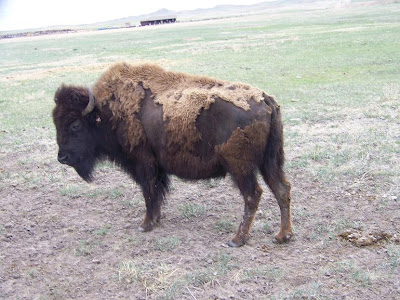 Most of the show herd gathered around the train that took us into their field, looking for the pellets our driver threw out the door. This one was particularly friendly. 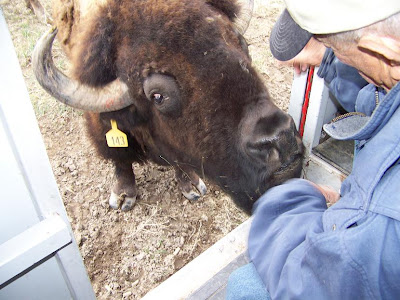 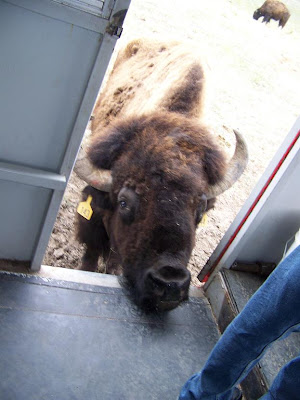 This one liked her head rubbed. My daughters were enchanted. 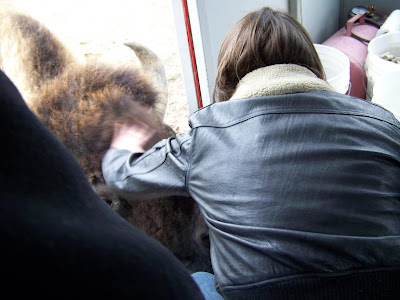 Here's how you tell the adult boys from the girls, apart from the obvious. The girls' horns curl back over their heads, like these two lovely ladies. 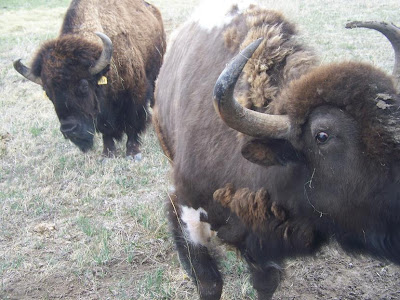 The guys' horns go straight up. There are fewer dudes in the Show Herd, because they're fiercer. 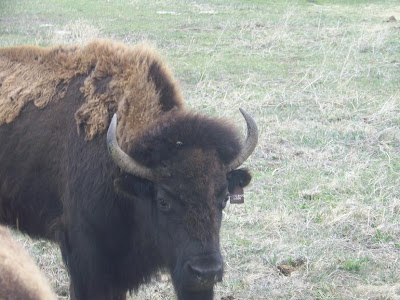 This is one of three trains that roll through the buffalo pastures for their tour. The owner of the bison ranch built the trains and their track himself. He purposely looped his track about 3oo feet into Colorado, so he could boast that he owns the largest privately held interstate train line in this country. That made me laugh. 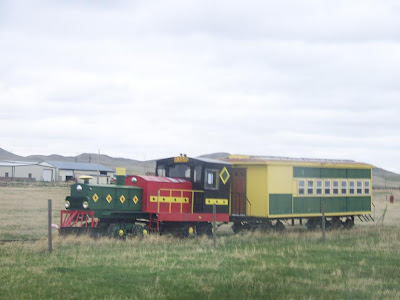 They had other assorted animals near the train depot, but the funniest was this goat. I love his hairdo. 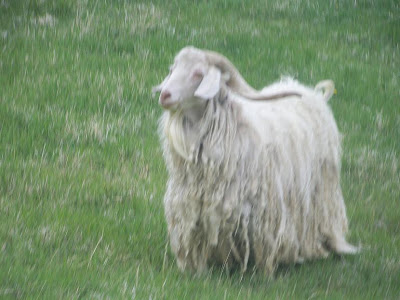 And this is the mansion on the Terry Bison Ranch. Originally built by Senator F. E. Warren of Wyoming, very close to the Colorado state line (like 1/10th of a mile), President Teddy Roosevelt was a guest. So they can truly brag that "Teddy Roosevelt slept here!" 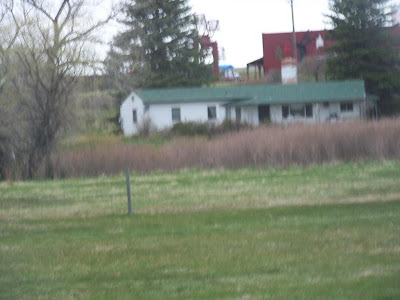 Of course, they had a restaurant with great food; we had buffalo burgers, bison chili and Beast sandwiches (pulled buffalo). No pictures of food; we were too busy celebrating Shannon's graduation.

And thus ends my little tour of Wyoming. I hope you all enjoyed it. And now you know what gender your buffalo are, should you ever encounter them!
Posted by Marjie at 2:19 PM

Email ThisBlogThis!Share to TwitterShare to FacebookShare to Pinterest
Labels: Wyoming

We both commented that the flimsy fence wouldn't hold them back if they got angry. I think from now on, we'll use a long zoom lens for pictures. Thanks for the handy info on determining sex.
Sue

What a cool place. We would live to go on the buffalo train
Benny & Lily

I had no idea on the horns' curve and gender! Love the train and the history lesson. Neat place. I'm glad Sue jogged your memory and you shared it with us.

I think one of the craziest things I ever saw was a tourist "sneaking" up behind a bison in Yellowstone.....stupid fool could have been killed.

I'll never forget my first encounter with buffalo at Yellowstone. I may have been there at the same time as Linda because some idiot (a word I don't use often) was trying to get a back shot. I had to walk away...

Personally, I'm lovin that goat's hair do too! So "retro."

Thanks for sharing, Marjie. I love bison stew!!!

Looks like a great stop - I'm sure glad someone decided to preserve these magnificent animals. Reminds me, I believe I have some bison burger in the freezer that needs to be eaten.

Everytime I visit here I learn something amazing.

Interesting, I had no idea they were so mean. When we were tent camping at Yellowstone we saw some idiots walk right up to them, good thing that buffalo was nice!

The bison really look rugged when they shed that Winter coat, don't they?

Thanks for the pics!

my high school mascot was the buffalo, and at one point, our old and abused costume looked much like those hideously shedding critters. good times. :)

Interesting post the American bison are quite different from the S. African Buffalo. Never the less temperament sounds similar, you don't want to get in their way!! Diane

Oh give me a home where the buffalo roam...

THANK YOU for posting this. I'm glad I found your blog!!

Thanks for the helpful info about bison. Don't know if we will be in that area again to see that ranch. Maybe if Chips goes to the AFA. Seeing your offspring so close to a bison head was a bit unnerving.