This statue is at the highest point on I-80 between the east coast and the west coast. It's right around 8000 feet in elevation. Yes, there are higher points in the Rocky Mountains, but this interstate doesn't go over them. This also happens to be the western end of Happy Jack Road, which runs between here and Cheyenne, right past Curt Gowdy State Park. Yes, it's named for the sportscaster Curt Gowdy, who was a native or something. (We once almost bought land off Happy Jack Road, which is why I know it so well. And in case you love the odd street names, we also seriously considered a house at the end of Experimental Farm Road.) 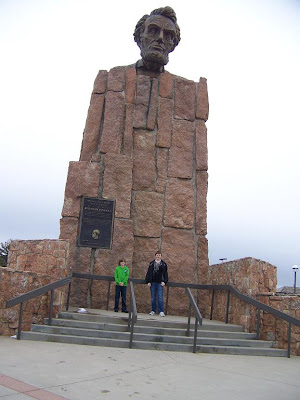 Note that it was cold enough that the boys' jackets were zipped up. They didn't waste any time getting back to the car, either. 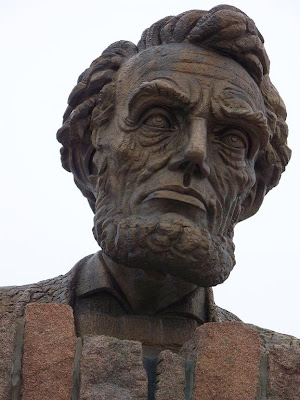 Good thing I have enough zoom lens on my camera to get a decent picture of Abe!
Posted by Marjie at 6:43 PM

Email ThisBlogThis!Share to TwitterShare to FacebookShare to Pinterest
Labels: Wyoming

I am so bummed. We drove right past this and missed it. Waaaaa!!!! I wanna go back!

that is one big Abe
Benny & Lily

That's a pretty decent zoom lens you've got there!

Wow, what a great picture! He doesn't look all that happy, though. I guess because he has no body. Then again, it could be because he didn't get a chance to watch the end of the play.

Thelma,
Have enjoyed the scenery. Best of all, no bumps in this road trip.
Regards,
Louise

Another thing I have learnt today, I did not know this even existed! Diane

GREAT shot Marjie. You did Abe proud. Seriously, I need a zoom like yours!!!

Abe looks either tired or grumpy.

I have a friend who refused to even look at certain houses when house shopping because of the street names!

That's a nice zoom. I have a new lens and need to try it out.

It's so hot here today, I'd like to go visit Abe and be cool.