We lost Cinnamon the guinea pig last night. The boys were upset, of course, but recognized that he's at least 5 years old, which is pretty old for a small animal.

Some of you might remember the day we got him and his friend, Rusty. Cinnamon always was a gutsy little guy. Right after I snapped this picture, he nibbled on Thor's nose. Poor Thor just looked like someone hurt his feelings. He's always kindly to smaller creatures (virtually all of us). 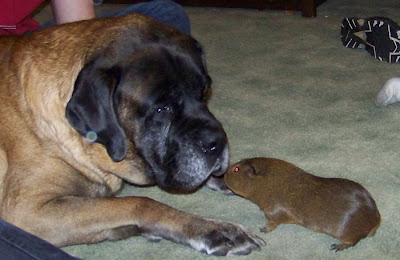 And when the boys took Cinnamon and Rusty outside to graze, Thor sat right near them, to make sure no one disturbed his boys and their little critters. 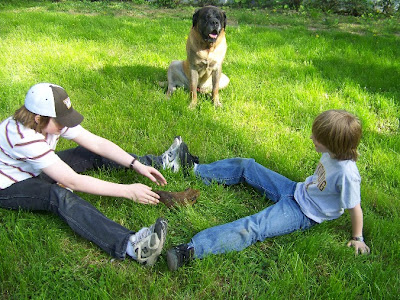 Remember when Dan gave Cinnamon a carrot? Thor had hurt feelings and had to have a carrot, too. It made us all laugh. Cinnamon calmly kept munching. 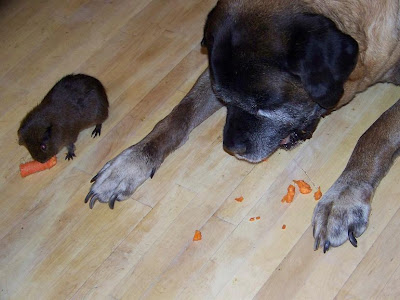 RIP, wee Cinnamon. I hope you find lots of sweet, green grass across the Rainbow Bridge. 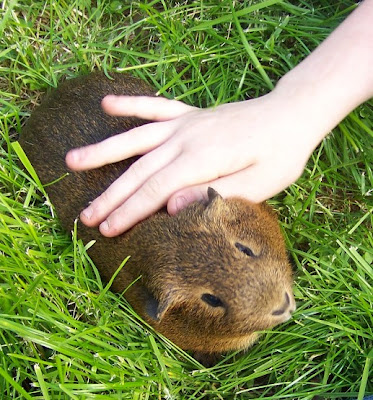 So sorry, but a lovely tribute. RIP Cinnamon. Diane

There's a crowd waiting at the bridge to meet Cinnamon. My Bentley will watch over him.

Aww... rest in peace little one. What a wonderful tribute.

I'm so sorry!
5 years is a great age for guinea pigs. He had a good life with you.
The first Picture is very beautiful. Thor is a good boy!
Violett

Sorry to hear this!
Our cat Salem just went across the Rainbow Bridge so it would be nice to think they are hanging out together..

I'm so sorry! That was a lovely tribute, and I agree with Violett - that last picture says it all. Cinnamon looks like he's smiling!

Sorry about your loss of little Cinnamon. I really like that photo of Thor and him contentedly munching carrots alongside each other. Very nice post.

We are sorry you lost your little Furiend Cinnamon~

What a sweet tribute and adorable pictures of Cinnamon-

It's always sad to loose a pet - seems as though they can all become family members.

I'm so sorry. I remember when my daughter lost her guinea, Popcorn. We were all so sad. They are so personable.

Thor will be missing his little friend. Run free Cinnamon.

What a lovely post to a beautiful pet. I'm sorry for your loss, I'm sure Thor will miss his little friend too. g

Oh Cinnamon looks very sweet! I am sorry for your loss ...be free Cinnamon.

i'm quite saddened, and not just because the critter had the best name ever. sorry for your loss!

Oh, Thor, we're so sorry for your loss. We're sure Cinnamon loved his life with you and the boys and we know he will be missed. We're equally sure he's in G.P. heaven now, having a rollicking good time.

oh that is sad - I am sorry.. nice tribute... I am currently building up some effort to post about our cat Mio. We had to have him put down last week... he was 10 years old, more and more beaten up ( by other cats) and also had a broken leg... so sad, I cried so hard at the vet.. allthough I know it was for the best...